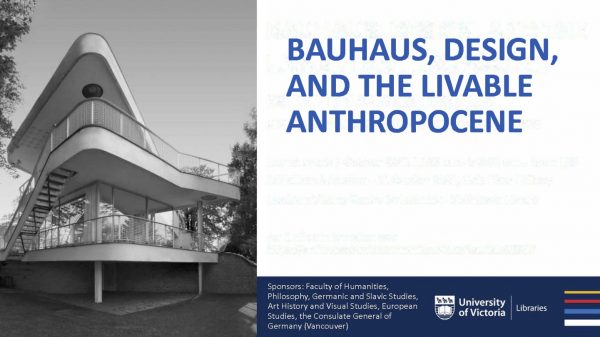 [Authors Note: This recap is based in great part on a summation of the event provided by the organizer of the Colloquium and Exhibition, Prof. Thomas Heyd, Department of Philosophy, University of Victoria]

On October 2nd, the University of Victoria celebrated the innovative approach to design and architecture developed at the Bauhaus Art School, founded in 1919 in Germany’s Weimar Republic. The one-day event, titled Bauhaus, Design, and the Livable Anthropocene, took place at the McPherson Library building and aimed to reflect on the historical impact of the Bauhaus approach and explore its potential for addressing the design challenges of living in the age of the Anthropocene.

The presentations and subsequent panel discussions were accompanied by an in-person exhibition—graciously being lent out by the Consulate General of the Federal Republic of Germany Vancouver—titled bau1haus that showcases photographs by Berlin-based artist Jean Molitor. His artwork displays the various facets of Modernist Architecture from Germany and around the world.

The symposium was opened by Dean Annalee Lepp‘s territorial land acknowledgment and a cordial welcome on behalf of the Faculty. Describing the difficult history of Colonialism in Canada, Lepp emphasizes the importance of undertaking “… the hard but very necessary work of reconciliation and decolonization” in Canada and our everyday life.

University Librarian, Jonathan Bengtson‘s welcoming speech spoke to the transformative power of education, especially that of Bauhaus School. Reflecting on the University’s changing relationship with the First Nations people, Bengton acknowledges that, as an educational institution, the University of Victoria, “seeks to understand who we are as an institution in a Canada that continues to crackle with the thought of residential schools.”

Marcus Milwright (Chair of Art History and Visual Studies) opened the colloquium and presentations: celebrating a century of Bauhaus School and the lasting impact the school has on our lives in the 21st century. In his opening speech Millwright encouraged the audience to think about how the Bauhaus offers a solution to the problems of our era, such as climate change and the most recent heatwave.

Keynote speaker Ulduz Maschaykh connected the architecture of the Bauhaus with the 21st-century global Housing Crisis in her presentation “Dwelling Architecture.” Showcasing examples of affordable housing in Germany’s Weimar Republic and Vancouver’s 21st-century, Maschaykh argued for the need “to look at buildings within their temporal context, examining how they relate—both to their immediate environment and the culture of the city.”

The German Consul General’s short speech on the legacy and timelessness of Bauhaus’ design in our everyday lives was the perfect segue to Menno Hubregtse‘s (Professor Art History and Visual Studies) presentation “Bauhaus, Dieter Rams and Good Design”, which focused on design aspects of Bauhaus.

Hubregtse argued that Modernism, in which Bauhaus looms large, is not a style but a discourse. He went on to say that even though the Bauhaus School had to close its doors with the rise of the Nazi regime in 1933, the School “whose legacy continues in the Hochschule fuer Gestaltung in Ulm” since 1955 remains resilient. Highlighting the practical aspect of the School, Hubregtse explained that “the aim was to design effective products that would improve people’s lives and last a long time.”

Lastly, Elena Pnevmonidou‘s (Professor Germanic and Slavic Studies), presentation titled “Environmental Humanities, Bauhaus and the Anthropocene” explored the idea of reviving Modernist utopianism and connecting with the values of Bauhaus. Introducing the research incubator ‘Humanities for the Anthropocene’ Pnevmonidou mentioned the environmental crisis of our era and that “….we have to proactively initiate the transformation of humanist disciplines in light of the environmental crisis.”

All the presentations—that covered topics ranging from housing, design, consumerism and Modernist utopianism—offered plenty of food for thought on the issues of our time.

The presentations were followed by a diverse panel discussion moderated by Marcus Milwright, focusing on the relevance of the Bauhaus approach in the times of the Anthropocene. An engaged audience asked questions on the purpose of residential properties, consumer society and sustainable living, and how to build a more just and egalitarian society in an increasingly divided era.

As part of the panel’s Q & A , Dean Lepp mentioned the Cornerstone Initiative as an example of the dilemma of our time: Cornerstone was a complex yet exciting community initiative in Victoria’s Fernwood neighbourhood. While the deteriorated building was rescued and is now used as a rental property for low-income housing, the project caused an involuntary effect of raising the property values of the surrounding buildings and eventually caused the displacement of local residents.

Marcus Milwright closed the symposium by reminding everyone to be mindful about the fact that we are uninvited guests on the unceded ancestral lands. As such, he argued, we need to remember and acknowledge the traditional owners of the land on which we stand.

The presentations and panel discussions can be watched on YouTube HERE. Visit the Mc-Pherson Library’s lobby to see the exhibit until October 31st, 2021 in person. The exhibition can also be viewed virtually HERE.