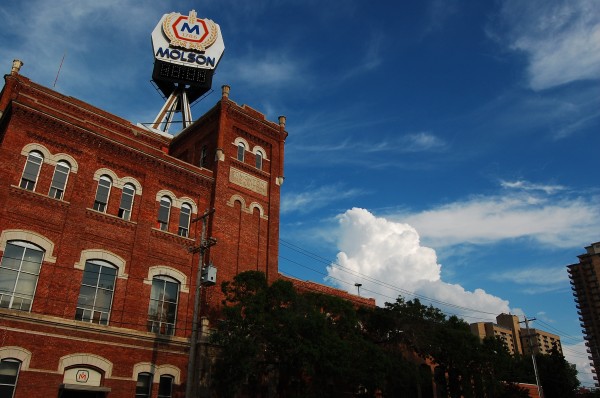 This is the second of two articles discussing proposed plans for the Molson/Crosstown site in northwest Oliver. Part two focuses on the former Molson Brewery. Part one can be read here.

Sometime in the late 1940’s Molson felt that their brewery needed a paint job. It was not until almost four decades later that a new generation of decision-makers at Molson realized that their predecessors had made a big mistake. A sandblaster made quick work of the off-white paint that enveloped the complex. However, the job was done hastily and damaged the brick, mortar, and some architectural features on the main tower of the original building.

If there are any positives to be drawn from this story it is that the paint job did not permanently alter the buildings on the site. More permanent renovations occurred when demolition began in 2010. Three short years ago, the site was home to a series of buildings that ran the gamut of early 20th century architectural styles – beginning with the iconic Edmonton Brewing & Malting Co. building built in 1913 in the obscure feudal brew-castle style that made the architect, Bernard Barthel, famous across Canada and the US, and ending with a modernist building built in 1967. This latter structure was the first in North America to house an authentic German Steinecker Hydromatic Brewhouse system.

Today, the only remaining buildings on this site are the original 1913 building and the south administrative building built in 1924. Upon closure of the Molson Brewery in 2007, Alberta Culture and Community Spirit (now Alberta Culture) noted that the buildings on the site might be at risk and pushed for a Historic Resource Impact Assessment (HRIA) to be undertaken. This was much to the delight of the City of Edmonton Heritage Planning group which has been fighting admirably for the preservation of this and a number of other important sites in Edmonton for over three decades. HIP Architects was hired to complete the assessment and the Province agreed with their findings – namely, that only the 1913 and 1924 buildings possessed provincial historic significance.

The HRIA process was ultimately a double-edged sword: while it served to protect the two most important buildings on the site, it also helped pave the way for the demolition of the others. The Edmonton Historical Board and Heritage Planning group fought to place the other older buildings on the City’s Historic Resources Inventory but as a result of the findings of the HRIA, they were not added. What’s more, in a likely case of conflict of interest, HIP Architects who conducted the HRIA for the Province was also the firm that was retained by the site’s previous owners, Anthem Properties. Anthem already had an initial vision for the site prior to conducting the study and this vision did not include the other buildings.

Over five years have passed since the HRIA and the two remaining buildings have yet to be added to the Alberta Register of Historic Places as provincial historic resources. The buildings have been sitting idle on the City’s Historic Resources Inventory for even longer, waiting for a property owner who is willing to designate them municipally. Like most things related to planning, heritage designation and preservation is a tricky balance between the rights of property owners and the wider public good. The City of Edmonton would love nothing more than to designate these buildings, but while the Province can designate without a property owner’s consent, the City cannot. In theory and according to the Historical Resources Act, the Province may designate any historic place as a Provincial Historic Resource if the conservation of that place is in the public interest. However, this rarely happens unless the site is in imminent danger of demolition.

More commonly, the Province will attempt to obtain permission from the property owner to designate a site. This process often includes the provision of incentives and/or compensation to the property owner since the owner will ultimately be responsible for the building’s upkeep and maintenance. Municipalities are under similar constraints when they wish to designate a Municipal Historic Resource. This is where challenges arise with respect to the current plans for the Molson/Crosstown site. No doubt, the City Administration has offered up some measure of incentive to encourage the owners to agree to designate this building. The problem is that they must accept the terms of heritage designation which include ensuring that alterations, additions or demolition do not occur without ministerial or municipal council approval, depending on the level of designation.

Current plans for the original Molson Building call for a ‘glass box’ addition similar to that proposed for the south facade of the LeMarchand Mansion and the demolition of the eastern portion of the 1913 building. Interestingly, Dialog – the architecture firm hired by the developers, First Capital Realty and Sunlife Financial – is working on both ‘glass box’ projects. Whether or not this is a larger scheme aimed at ‘branding’ their work is up for debate. However, the larger issue in both cases is that the additions will arguably undermine, obscure or alter character defining features of both buildings. According to the Standards and Guidelines for the Conservation of Historic Places in Canada, additions that undermine the heritage value of a site by obscuring, damaging or destroying character defining features (like the rear, eastern portion of the Molson Building) or by making character altering rooftop additions (like building a large glass box on the southern portion of the rooftop) is not recommended. Unfortunately, these are only guidelines and are not completely binding on even designated heritage sites. Again, it ultimately comes down to a decision by the Minister of Culture or municipal council of the day.

The original brewery was built, owned and operated in the early years by former Strathcona mayor William Henry Sheppard as a means to expand operations that started at his Rossdale Brewery. This combined with its unique design by an architect, distinguished across North America for his expertise in brewery design, gives the building an importance that should warrant both imaginativeness and slow, measured consideration of its use and restoration. However, at last month’s open house the representative for Dialog seemed to approach this challenge with an alarming uneasiness, uncertainty and lack of understanding for what makes this site a great and important asset for Edmonton. There was a sense that the preservation of the building is more of a burden for the applicants rather than a unique illustrious opportunity for both the architect and the applicant.

This was made clear again and again when the architect contemptuously referred to the interior layout of the building as a challenge that would not provide desirable layouts for conventional retail and office leasers. Edmonton is increasingly becoming the creative centre of Alberta and unique spaces like those available in the remaining Molson buildings are at a premium. There is no doubt that, given the chance, local entrepreneurs would find ways to be profitable and add value to the buildings on this site. Have the applicants not heard of a little gem in Edmonton known as the 104 Street Promenade or more specifically, the Mercer Building?

Heritage has become an increasingly precious commodity in Edmonton – its relative scarcity arguably a result of a boom-town mentality that causes us to focus on cheap, utilitarian designs. The remaining buildings on the Molson site must be preserved in their entirety and the character and authenticity of their interiors must be maintained as a precious resource.

No one is denying the multi-million dollar investment already made on the site by the applicants but this does not absolve them of their responsibility to ensure their development integrates with and respects the nature and history of the surrounding communities. At the moment, it is clear that they are short changing themselves and the community by proposing to develop the site in its current configuration. There are countless examples across North America of vibrant, mixed use, historic brewery districts. The common thread in all of these is that they are all able to preserve history, enhance community, prioritize walkability and be highly profitable. It is not inconceivable that such a development – a quality development that balances and mixes residential uses with local and large format office and retail – is possible on the Molson/Crosstown site.

My Edmonton is a creative metropolitan centre that respects and cherishes its history. The current Molson/Crosstown proposal does not fit that vision.

I urge you to connect with Mayor Mandel and City Council and echo the Mayor’s call (and mine) for “No more crap!”