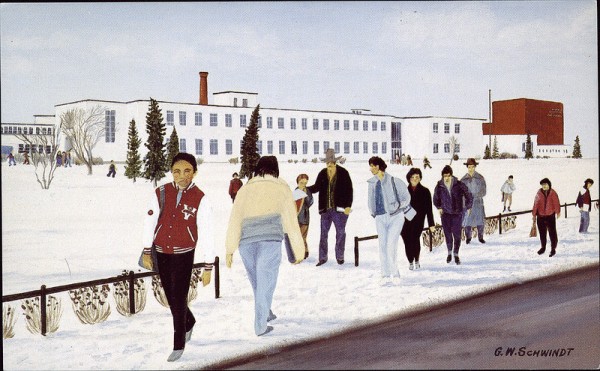 The history of planning for schools and parks in Edmonton shows governments moving in an uncoordinated and contradictory way toward both collaboration and separation of uses. Part 1 of this article describes how Provincial legislation set up a streamlined land acquisition process for schools and parks and cooperative use of the land by the municipality and school authorities. Though Edmonton’s Zoning Bylaw at the time (Bylaw 2135) predated the legislation, the two were largely compatible. Ironically, the subsequent Bylaw (5996), adopted in 1980, went against the direction of the legislation, making cooperative use more difficult.

In Bylaw 2135, passed in 1961, typical parks and schools fell, respectively, under two use classes: Public Parks and Public Schools. The Bylaw permitted one or both of these classes in the following districts:

The general approach was that parks belonged almost everywhere, except in industrial areas, and that schools were integral to residential areas. In the residential districts, schools and parks were listed together and were generally the only permitted non-residential classes. The Bylaw allowed for the mix of school and park uses on the same land and in the same facilities, which would soon be encouraged by Provincial legislation.

This Bylaw saw its last major amendment in 1978. The most significant change was the creation of a Public Service District, which allowed for institutional uses, including parks and schools, separately from the communities they were meant to serve. This was already the case for parks, with the Public Park District, but was a new approach for schools.

Bylaw 5996, introduced in 1980, separated uses along hard lines. It removed school and park use classes from all the general residential and commercial districts. It also deleted parks from its new version of the Public Service District, the Urban Services District. This new District brought together all public and private institutional use classes, but excluded Public Parks since there was already a Public Parks District.

The only districts that kept a broad mix of uses were in the agriculture category. Public Parks was left and Public Schools was added to the transition district from agriculture to urban residential development, the Urban Reserve District.

There were many mid-sized parks that included the full range of community, recreation and education uses, but no district in the Bylaw covered all of them. The solution was typically to zone the school as Urban Services and the surrounding park area as Public Park, but this imposed an artificial segregation on the site. Community and school users shared, and continue to share, fields and other facilities. Cooperation was simply limited by a Zoning Bylaw that over-segregated uses. It was difficult, for instance, to construct a playground close to an elementary school.

Despite agreements being in place between the City of Edmonton and the local school authorities, as well as collaboration being encouraged by the Province since the 1970s, Edmonton’s Zoning Bylaw separated parks and schools from each other and from other uses. This segregation lasted until 2014, when schools were added to the Public Parks Zone and parks were added to the Urban Services Zone. The questions remain whether the more fundamental change of removing schools and parks from residential and commercial districts was necessary or positive, and how this regulation shaped the communities, services and infrastructure that developed in Edmonton during this time.