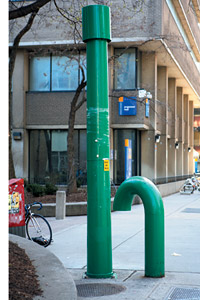 They may not be very noticable, but the green, 12-foot pipes that rise from the ground and often dot the edge of parks throughout Toronto are linked to the uglier and less romantic aspects of civic engineering and infrastructure that hide under the city's surface.

Three of these curious green pipes stand in a huddle at the northern edge of Trinity Bellwoods Park. They are vent stacks that release odours from the Mid-Toronto Interceptor Sewer, which carries household sewage 80 feet underground. Their purpose is to control the smell from the sewer by letting air out from the sealed system underneath.

Luckily, the vent stacks don't actually emit a foul stench — a series of carbon filters fitted in the top of the pipes neutralize the smell, and city workers change the filters weekly.

The vent stacks appear periodically along sewer systems' routes and buried ravines. They've been in place on the city's streets since 1978.

Other similar-looking green pipes appear in the most seemingly random places to aid in underground air circulation and ventilation. Along Broadview, sitting underneath the eastern side of Riverdale Park, there is a line of green exhaust vents that release potentially explosive methane gas produced from decomposing organic matter in the location formerly known as the "Riverdale Landfill." A gravel trench that runs six feet under the ground captures the gas so that it does not migrate across Broadview to the residential area.

From the perspective of the person passing them on the street, the green statues don't betray any obvious function. But the sight of these benign-looking tubes inspires reflection on what goes into engineering a modern city, a reminder of just how controlled the urban environment is.