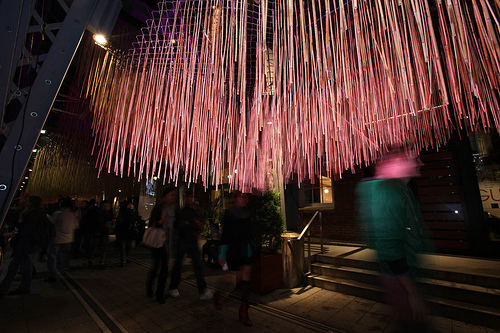 Each Tuesday, Spacing Montreal will share some posts from our sister blog, Spacing Toronto. We hope it will fuel constructive dialogue on the urban issues faced by both cities.

• Toronto celebrated its annual Nuit Blanche on October 3rd. Over 1 million people participated, more than doubling the turn out from 2 years ago. Read about it here, here, and here.

• The TTC increases its fares and amends the Bylaw stating offenses. In addition to the usual wrongdoings, the TTC will now have the authority to charge fines for misuse of priority seating, obstructing doors, laying across seats or putting your feet on the seats.

• The 2009 Heritage Toronto Awards are announced! Winners of restoration projects include Artscape Wychwood barns, Eglinton St. George’s United Church and Scottish Tower & Garden at Casa Loma (which this humble correspondent worked on a few years ago.)