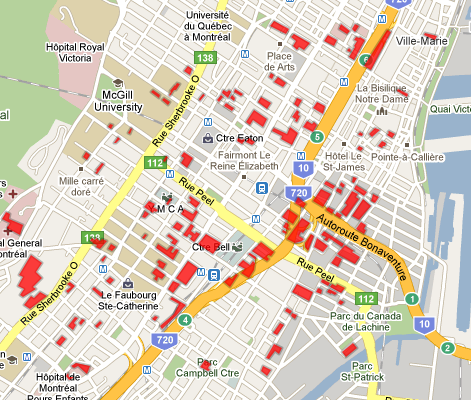 As I mentioned in my post last week about the 2010 City of Montreal budget, one of the new measures it includes is a special tax on downtown parking spaces. Two zones of taxation are proposed. Parking lots in central neighbourhoods (defined by Atwater on the west, Papineau on the east, and des Pins on the north) will be taxed at a lower rate. Parking lots in the central business district will be taxed at a higher rate. In both cases exterior surface parking will be billed at a higher rate than indoor parking.

The charges will range from $19.80 per square metre for a surface lot in the central business district to $4.95 per square metre for an indoor lot farther out. The revenue generated from this tax will be earmarked for improving public transit, and the city expects it to make around $20 million dollars per year.

This is a measure long overdue. As the above map shows, surface parking lots take up a significant portion of the downtown area. While the situation in Montreal is not nearly as bad as in some of the Canadian Prairies cities or the US  Sunbelt cities, surface parking is nevertheless very present.

This constitutes an inefficient use of space which is to be discouraged. It promotes an unsustainable car-dependent lifestyle and retards the development of large swaths of downtown. Part of the reason there is so much surface parking is because it is profitable and requires little investment. Why spend tens of millions of dollars constructing (or renovating) a building on your property when you can just throw down some asphalt and start immediately extracting money from it? This new tax will help change the profit calculations of property owners and encourage them to look for other uses for their land.

Of course, some amount of parking will always be needed downtown. A sensible policy would be to gradually replace existing surface parking with more space-efficient indoor parking, while in the process slowly reducing the total supply of parking to encourage all who can take public transit to do so.  The Parking Lot Tax is a good first step towards that vision.

While I am generally supportive of this policy, I question the City’s decision of where to delineate the higher and lower rate zones. The higher rate zone fails to include two key parking areas that are closely linked to the central business district: the sector south of Sainte-Catherine and east of Guy, and the lots around the Bonaventure Expressway. This second case is all the more puzzling given the Tremblay administration’s goal of removing the raised expressway and rehabilitating the surrounding sector. If the area is to be revitalized then the parking lots must go.

In the map below the higher-rate sector is shown in blue, and the parking sectors it excludes are clearly visible. 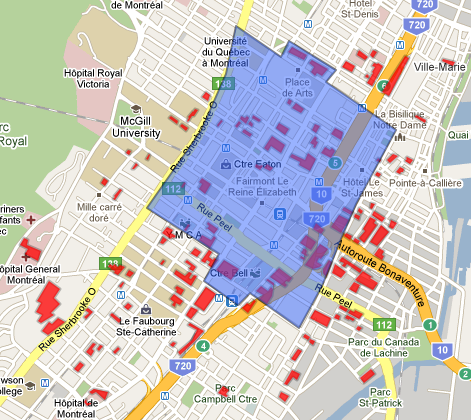 As to be expected, certain downtown merchants have begun to make a fuss. Many of them are still angry over last year’s increase in parking meter rates, out of the same perennial fear of competition from suburban malls. Tremblay knew that he would take some criticism on this issue, and to his credit he pushed ahead anyway. Hopefully this is a sign of a new willingness to get serious on improving public transit and promoting a pro-sustainability agenda.