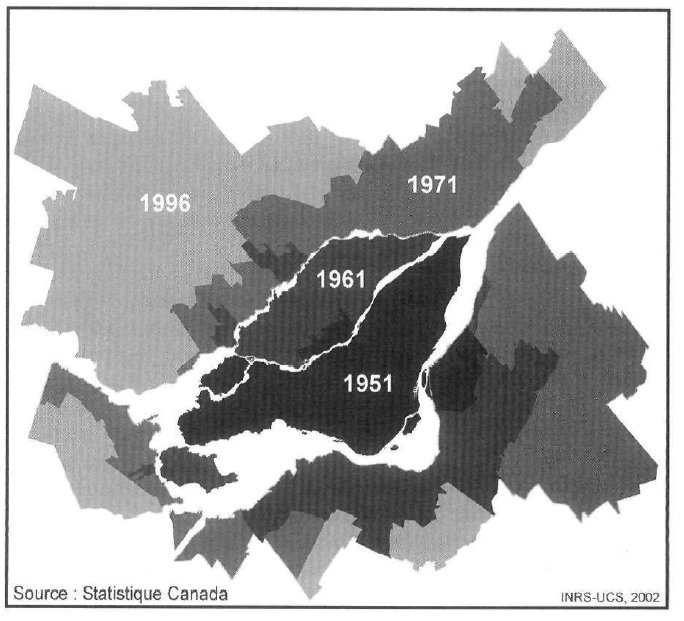 The evolution of Montreal's "metropolitan census area" as defined by the Federal government. From Collin et al. (2003), From City to City-Region: Historical Perspective on the Contentious Definitions of the Montreal Metropolitan Area

I realize now this could (and should probably) have been my very first post under this heading, as I have more or less taken for granted in previous posts that the definition of the “urban region” (or the “metropolitan region”) was self-evident. Clearly, it isn’t so – no geographical scale or territorial subdivision is. I do not, therefore, claim that the idea of a region should naturally make sense. Rather, I start from the premise that the concept of the urban region is necessary, whether or not it reflects our perception of reality, our everyday experience of place or our sense of belonging (see this post for a brief exposé of the importance of regional planning and the concept of region).

More importantly, I also believe that the way we act collectively, and in particular the way we subdivide the land and break down the territory socially and politically, can either promote or hinder our “sense of a region”. And nowhere is this more obvious than in Montreal, both historically and in the current period.

I know it is bad form to cite academic articles in a blog, but the works of Jean-Pierre Collin (and more specifically this article, which unfortunately is not available for free), really help shed light on this issue. His main argument is basically the following: there never was a regional sense of belonging in Montreal to start with, and the fragmentation of the region into numerous parishes, villages and towns (which has partly do this with the fact that Montreal had an important English-speaking population that sought to control its local institutions) has entrenched numerous sub-regional identities, many of which were created in opposition (or contrast) to Montreal. In short, the idea of a “Montreal metropolitan region” was contentious from the start – and remains so today.

Sherry Olson and Patricia Thornton, in a recent book, report that several families established in Montreal in the mid-19th century moved to the adjacent countryside only to return to the city 10, 20 or 30 years later. This could have contributed to solidifying a regional identity in and around Montreal; yet, as Prof. Olson told me herself, there is no evidence of that.

Another interesting fact: when the Liberals created the administrative regions (then called “districts”) in 1966 to better coordinate policy-making among local governments and across levels of government, they deliberately did not create a “Montreal metropolitan administrative region”; instead, they divided up Montreal’s suburbs and exurbs among four different regions, namely Montérégie, Laval, Laurentides and Lanaudière – and this in spite of the fact that Longueuil was part of Montreal’s census metropolitan area starting in 1951, and Laval of much of the South Shore starting in 1961 (see map above). I am not a historian, but it does strike me as a “divide and conquer” strategy, one that has obviously worked quite well: the metropolitan region of Montreal, as defined by the Communauté métropolitaine de Montréal (CMM) has now no fewer than seven different Conférences régionales des élus (CRÉ), i.e., seven groups of elected representatives trying to coordinate among themselves in their little sub-regions, focused on their belonging not to a larger regional entity, but to a smaller one. No wonder suburban mayors resisted the Plan métropolitan d’aménagement et de développement (PMAD) so fiercely.

Personally, I think the Statscan definition of a metropolitan region as “an urban core surrounded by urban and rural fringes with which there is a strong degree of social and economic integration” (as defined chiefly by daily commuting patterns) makes sense.

But having a technical definition of this sort does not contribute very much to advancing our understanding of the region as a contentious, emotionally-charged, historically-loaded, fuzzy, dynamic and evolving phenomenon, which is why a group of planning enthusiasts and I have proposed to walk across the region as a way to question the concept by engaging with it directly (see this post and this post to get a flavor of last year’s expedition). What better way to engage with the idea of the region than to test it out concretely, on the ground, with one’s own feet?

For those interested: this year’s walk will take place between Kahnawake and Lachenaie on June 30th, July 1st and July 2nd and we are intently and insistently looking for participants who live in the region but outside of the island of Montreal. Please, if you know anyone who might be interested, forward me their names (walktheregion@gmail.com).

Also, if you would like to join us for part of the walk – whether or not you live in the suburbs – we would love to have you! Just send me an e-mail and I’ll add you on the mailing list (which I use parsimoniously).