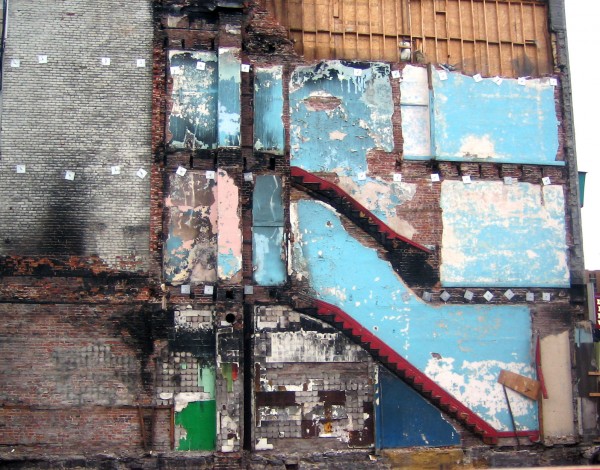 One summer, when I was a teenager, a life-sized replica of Stonehenge made of compacted trash was erected in the empty lot on Sherbrooke & St-Laurent. At the time, there was scaffolding along the western wall of the abandoned Godin building, and people were invited to climb up and throw old computer towers and monitors down into the dumpster four stories below.

This, we understood even at our tender age, was art.

The economic and political instability, which were beyond my grasp as a kid growing up in the ’80s and ’90s, manifested as boarded up store fronts and vacant lots that we assumed were normal.

Later, as the city emerged from depression, we felt a confused outrage when the holes began to be filled in. It’s not that we’d been particularly fond those vacant lots that were littered with empty mickeys and soggy mattresses, but we knew the condo towers and office buildings and hotels that rose in their place were not for us.

The holes, at least, had the air of an unruly frontier, a sense of possibility.

When I returned to Montreal for Christmas last month, I stumbled upon one of my favourite bands, Bad Uncle — whom I first met at some illegal loft-party indie-show — playing in the park on Mount-Royal Avenue a few blocks from my parents’ house. There was an enclosed gazebo on the site to keep the musicians warm, a stand selling Plateau microbrews, and a fire pit where the fans gathered to roast hot dogs on twigs.

I was thrilled to discover more fire pits in touristy Place Jacques-Cartier, along with the see-saws in the Place des Spectacles. Could it be, I wondered, that some City official took note of the wistful posts I wrote years ago about fire in public spaces and the city as a jungle gym? More likely, I decided, that all the glorious grit and whimsy that was infiltrating our public spaces could be attributed to a generation of City workers, community organizers, and business-owners who grew up alongside me in the city of holes.

The same could be supposed about the new cohort of City journalists and columnists (every paper has adopted one). When the Journal Metro published a list of 25 projects that marked Montreal in 2015, almost all of them occupied the city’s gaps and fringe-spaces.

The series celebrated the community gardens, food stands, children’s games, and chaises-longues hosted within the city’s various holes; alleyway block parties and BBQs; dance parties under overpasses and on porches; street art under the banner of several festivals; and of course this year’s encore of our pop-up beach. They even highlighted the organization and web portal, Lande, dedicated to the occupation and transformation of Montreal’s vacant lots.

These urban projects that make me feel excited to be in Montreal are modest and ephemeral compared to the development projects that I have so hotly contested in my past posts (the infamous Projet Griffintown was my catalyst, with the Quadrilatère Saint-Laurent hot on its heals). These projects feel precarious, or perhaps just trendy.

But those of us who inherited a crumbling concrete legacy aren’t so easily seduced by the promises of permanence and rigidity.

When you grow up in a city of holes, you learn that it is not the not the bricks and mortar that define a place, but all that can happen in the spaces between.