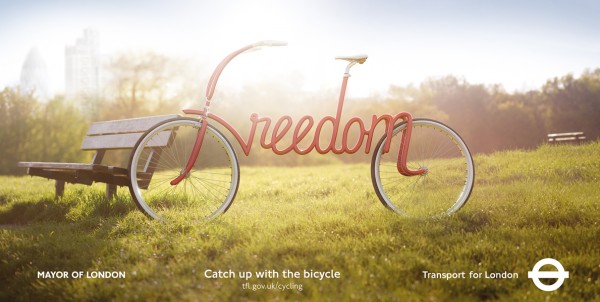 This post by Beth Savan is part of Spacing‘s partnership with the Toronto Cycling Think and Do Tank at the University of Toronto. Find out more about the think tank, and the series, here.

While Mayor Boris Johnson’s recent announcement of a $1.4billion investment in cycling infrastructure turned heads and made headlines around the world, the new magic of cycling in London began more than a decade ago with the planning for the 2012 Olympics.

I’ve loved seeing the city transform as it has introduced an extensive network of painted bike paths both on and off roads, and energetically encouraged cycling.  The program is complex and involves promotion, infrastructure, signage, route planning, training, free spring bike clinics along commuter routes, free cycle guides and a bike share system.  Boris bikes (named after the current mayor) are available for rent throughout the downtown, with a handy app (Cycle Deluxe) identifying the locations of bike hubs and the number of bikes available and parking spots free at each. Incentives and marketing programs help employers promote cycling by their staff.

A brilliant ad campaign “Catch up with the bicycle” by Jason Giblin Hindley (above image) has put cycling in a more public place. The campaign is positive, almost joyous, and celebrates the freedom, family time, fun and ease that are so much part of urban cycling.

Cycling has exploded in popularity. There is a diverse population of cyclists and bicycles. The ubiquitous Brompton folding bike, and other imitators, are especially suitable for commuters using trains, subway or buses. The traditional “sit up and beg” bikes are currently produced by several UK manufacturers. Hybrids, track bikes, road bikes and even mountain bikes are abound on the streets. Huge numbers clog the bike parking facilities near transportation hubs and commercial centres.

A big race win by the UK’s Bradley Wiggins has increased the profile of sports cycling and spandex clad road racers are frequently seen on London’s streets.

The “bike box” situated in front of cars and behind crosswalks at stoplights is present at many intersections, and London cyclists are confident, but largely law-abiding in the city. The default speed limit is 30 miles per hour (48 km. per hour) but traffic usually moves at a much slower pace on the narrow, windy streets with frequent speed bumps and other traffic calming devices.

As in Toronto, cycling is often the quickest way to get around in the downtown area. The congestion charge for automobile entry into the central city (9-12 pounds, or $14-19 Canadian per automobile entry per day), along with shared bus and bike lanes where dedicated cycle paths aren’t present results in traffic much less hazardous than one might expect in a city of this size and density. 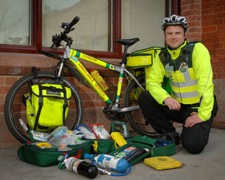 Bikes have moved far beyond just transportation for commuters and are built into the emergency response fabric of the city. They are used by the ambulance services in dense areas of the city. Judging by one bike responder we met, these folks love their work and have a great relationship with the general public, cruising along the south bank of the Thames, in Soho and around the Olympics site during the recent games.  Tom Lynch, the originator of this great scheme, a paramedic and BMX champion, has been awarded an Order of the British Empire for his efforts, and the biking paramedics have saved the National Health Service over 300,000 pounds (or approximately $470,000 Canadian) in fuel charges in the first ten years of their existence, not to mention the 50,000 patients they’ve served. This service piloted way back in 2000 and has been a financial and social success.

Several off road routes follow streams feeding the Thames, and hug the Thames both in the city and just outside it. They make delightful day trips. So, if you’re in London, UK, give cycling a try, and discover the city at a pleasant pace -one that’s faster than most cars and buses can manage. The new magic of cycling in London bodes well for change in congested cities around the world.

Beth Savan is based at the Cities Centre and School of the Environment, University of Toronto, and is the Principal Investigator at the Toronto Cycling Think And Do Tank. She’s also an avid city cyclist who divides her time between Toronto, London UK, and rural France.