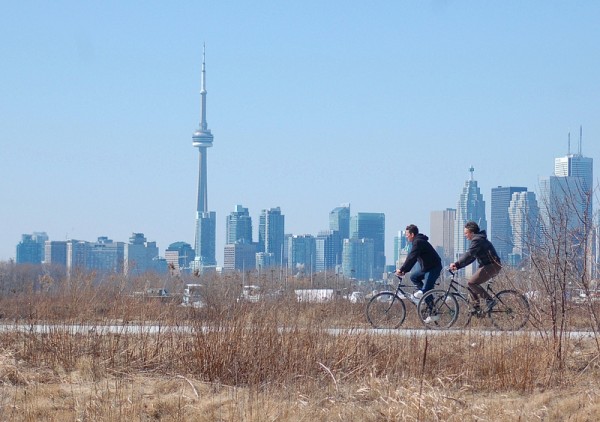 Spacing is pleased to be working with the Toronto Cycling Think & Do Tank, a research partnership located at the School of the Environment, University of Toronto, devoted to increasing cycling for transportation. This is the start of an ongoing series of posts looking at some of the research coming out of the think tank. Though looking at Toronto in particular, we think it will be of interest to cyclists and cycling advocates across the country — the more cycling information there is, the better. This first post is by principal investigator, Beth Savan.

These days, Toronto isn’t widely known as a cycling-friendly city. What other modern urban metropolis is removing bike lanes, instead of creating them? But a new project, the Toronto Cycling Think & Do Tank at University of Toronto’s School of the Environment aims to change this image. In spite of our woeful lack of infrastructure, Toronto’s cycling population is growing: Between 2001 and 2006, the percentage of Torontonians cycling grew by more than 30% (Toronto Public Health (2012) Road to Health: Improving Walking and Cycling in Toronto PDF) and a recent planning department report suggests further growth since 2006 (City of Toronto Planning Department. (2012). Living in Downtown and the Centres PDF). We think there are effective tools to help it grow further.  Tools that will be piloted and researched in Toronto, but that we are confident will be useful in communities across Canada and around the world.

Taking a leaf from books written by social psychologists, we are using proven tools for behaviour change, integrating a suite of complementary interventions shown to work in other fields. We will research, develop and pilot test a made to measure recipe for cycling adoption, including ingredients such as pledges, free tune ups and equipment, group rides, lots of peer modeling and social support, local hubs to catalyze change and provide advice like route planning. We’ll throw in a generous dose of fun and celebration for good measure.

We’re working in a terrific team of brilliant and enthusiastic students and faculty at the U of T, along with a host of creative and savvy partners off campus – groups like CultureLink Settlement Services, 4th Floor and Curbside, Toronto Centre for Active Transportation, 8-80 Cities, Evergreen, BikeChain, dandyhorse, and Shawn Micallef at Spacing.

Our first job has been to map the city – charting the intensity of cycling ward by ward, and learning about the detailed demographics of each part of our city. We hope to figure out why people in some wards cycle much more than those in neighbouring wards, and identify the specific barriers that keep people off bikes in parts of the city where cycling is the quickest way to get around. We’ll evaluate how population make-up, cycling resources and infrastructure appear to influence cycling patterns on a ward by ward basis. Next we’ll study the variety of tools for encouraging cycling tested in other communities, and, using the well-developed literature in social psychology, put these tried and true ingredients together into our integrated recipe. Finally, we’ll try out our recipe, adapting it to the different tastes of a couple of carefully chosen communities, where the benefits of cycling would be considerable.

We’re also looking at how cycling affects our economy, and how for profit and not for profit cycling hubs can both benefit from the boom in urban cycling and contribute to it. We know that cycling costs less than travelling by motorized vehicles, but we’ll try to figure out exactly how much less it costs, and what the economic benefits are for both local businesses and the community at large of having more cyclists on the road.

Beth Savan is based at the Cities Centre and School of the Environment, University of Toronto, and is the Principal Investigator at the Toronto Cycling Think And Do Tank. She’s also an avid city cyclist