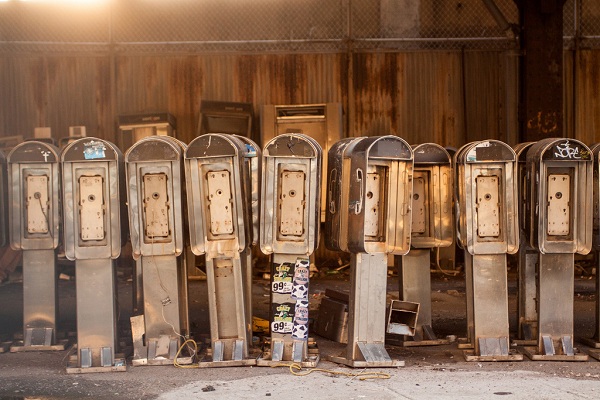 Superman certainly has been having a harder time finding somewhere to change lately: the usual street closet / phone booth is becoming increasingly difficult to find. Before the advent of the cellphone, phone booths existed on nearly ever corner, and even in long banks near major intersections. And now, in their absence, we are faced with the question: just what happens to them after they are ripped up off the street and taken away?

New York photographer Dave Bledsoe has posted what appears to be a veritable graveyard for old pay phones. Several of the shots have been posted on his Flickr account, which has struck a chord with visitors.

“I think these photos have struck such a chord with people because of the affinity for analog technology which is very popular right now,” Bledsoe said in an Atlanic Cities article. “Seeing these phones piled up like this makes people think of the lost connections and the missing sense of place and permanence they bring.”

Still, there are currently 10,524 active telephone booths in New York.