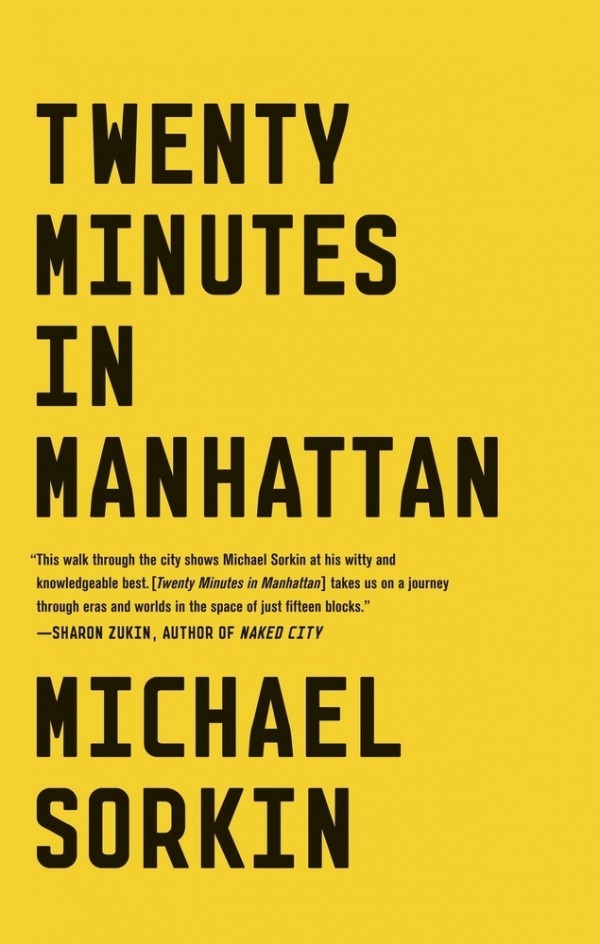 Every morning, the architect and writer Michael Sorkin walks downtown from his Greenwich Village apartment through Washington Square to his Tribeca office. Sorkin isn’t in a hurry, and he never ignores his surroundings. Instead, he pays careful, close attention. And in Twenty Minutes in Manhattan, he explains what he sees, what he imagines, what he knows – giving us extraordinary access to the layers of history, the feats of engineering and artistry, and the intense social drama that take place along a simple twenty-minute walk.

On a recent trip to New York, I had the opportunity to appreciate what Jane Jacobs referred to as the ‘great urban ballet’ that allows millions of people to coexist on a day-to-day basis and interweave their complex modes of personal living with a sense of civic duty. Moments in the NY cityscape and its history have become architecture and urbanism’s archetypes. The gentrification of the factories in SoHo and their transformation into expensive housing is one such example that is now being repeated in Chelsea and the Hudson Yards. And whether you think it Disneyfication or cutting edge, developments like the High Line ensure the conversation keeps going about how we can better live in our cities.

The charm of New York, as brilliantly revealed in Michael Sorkin’s new Twenty Minutes in Manhattan (North Point Press 2013), is that it is constantly changing. Rather it is not a question of whether or not change will happen, but when will it happen. The devastating storm surge and blackouts caused by Hurricane Sandy, a debilitating snowstorm and winter a few years prior to that, along with the tragedy of 9/11 – these are all moments that every constituent of every city in the world has shared with New York. Less devastating, but tragic nonetheless, are the disasters currently being caused by short-sighted developers and city planners.

Despite this, there are clear instances of the city’s resilience, such as the new bike paths and ‘reopening’ of Times Square, along with urban anomalies like the random pop-up flea market I experienced on a sunny Sunday afternoon in Midtown, closing down Madison Avenue from 54th to 42nd Street. And so who better to be our guide through New York than Michael Sorkin, helping us through the divine comedy that is Lower Manhattan.

Sorkin’s latest book is also his most personal to date. Though still including the strong critiques of our current starchitect culture that is typical for him, he is more concerned with the intimate moments of city-life, those details that can be discerned through the simple act of walking down a city street, and even more specifically, his. Inevitable discussions of Walter Benjamin’s flaneur ensue, and Sorkin’s narrative is both clever and elegant in its simplicity, i.e. a description of the twenty minute walk he takes to work everyday, from his home in the Village to his office in Tribeca. Twelve years in the making, Sorkin combines his meditations and anecdotes on where he both lives and works, with the neighbourhoods he passes through on a daily basis.

The first three chapters of the book are the most interior, setting the stage for his walk – expositions of the author’s tenure of living in an apartment called Annabel Lee. The first and longest chapter called, The Stair, begins with the history of the city’s early residential zoning laws, along with the appearance of the ubiquitous and elevator-less five-storey walk-up (of which Annabel Lee is one). This moves onto an explanation of New York’s rent control, of which he likewise has some benefit as a long time resident. The first chapter is also an introduction to the ongoing feud he has with his landlord, who makes several reappearances through the book.

His narrative oscillates here between more anecdotal events in his building (run-ins with the neighbours, rent cheque mix-ups), to much larger issues, like the aspirations of Robert Moses and other city planners, and the forces of the people they ran up against, folks like Jane Jacobs. The next chapter – The Stoop – launches into a full-on discussion of the public-private realm, touching on such phenomena as civic parades, Critical Mass, Disneyfication, and commenting on his overall distrust of Business Improvements Districts.

The next chapter, The Block, is the last discussion of his home before heading out the door to work and includes a full taxonomy of all the buildings on his street. This leads to discussions of community and connection to one’s neighbours, into which he raises the notion of the block party the neighbourhood puts on once year, and its instant public space –  a reclamation of what already belongs to the public. Larger topics he touches upon in this chapter includes a discussion of democratic space, citing historical examples of the protests in Union Square, the Situationists in Paris, and even including Archigram and the Metabolists.

The Block finishes with his observation that the cross-section of the street in front of his building, most typical of Manhattan’s streets, is dominated by the car (four lanes, about 30’) versus the two sidewalks (10’ total) for the pedestrian. He finds it astonishing in our day and age, especially in a city that has such an amazing public transit system, that such a large percentage of the public domain on his block at the end of the day, is essentially free parking for forty cars (he counted), for those lucky enough to get a spot on the street.

The remaining chapters of the book are named for the neighborhoods, parks, and streets he walks through on his way to his studio in Tribeca – Greenwich Village, LaGuardia Place, SoHo, Washington Square, and Canal Street, the latter of which is a humourous take on how to cross a busy street in downtown New York. This prompts him to talk about the slowness of traffic in cities he’s visited in India, where he observed the slowest unit on the road was the cow, postulating a notion of ‘slow traffic’ in American cities, and briefly wondering what it might be like to release livestock in Washington Square.

Each chapter has a corresponding larger urban discussion which Sorkin uses as points of departure to discuss the more complex issues he’s clearly thought long and hard upon his daily walk. Some of the pieces he weaves into Twenty Minutes include articles previously written for Architectural Record and the Village Voice, which he acknowledges at the end of the book. Though he doesn’t say which, I thought I experienced déjà vu reading his piece in the afterword decrying Trump’s new hotel up the street from him, along with his piece on the new 9/11 memorial.

In the chapter on Washington Square, he describes the origins of the park with the great Arch, itself built in 1895 by McKim Mead & White for the centennial inauguration of the nation’s first president. The author shows his protective streak here, allowing no sleight on his block (certainly not on his watch), riffing on Hollywood for occasionally taking over Washington Square for a movie shoot.

In this chapter he also discusses Richard Serra’s controversial sculpture Tilted Arc, which was removed from its plaza in front of the Jacob Javits Federal building after the same building’s occupants filed a lawsuit claiming it blocked their view. This provides the opportunity for a discussion of the relationship of art to the public realm.

In ‘LaGuardia Place,’ Sorkin discusses the issue of affordable housing in both New York and abroad, lamenting the shortcomings of much-hyped private-public partnerships which, despite trade-offs of amenity for bonus density, is exacerbating the homelessness issue in the city. He also touches upon new uber-scaled developments like the Hudson Yards, soon to be home of the third phase of the High Line. Sorkin here longs for a cohesive vision for this mass of developments, and harkens back to Corb’s Chandigarh and Unite d’Habitation.

In the chapter on SoHo (which means ‘South of Houston Street’), the topic not surprisingly is on gentrification and how all the old factories which were converted to lofts have reached the end of their trajectory as now exorbitantly priced housing for the 1%, far out of reach of Sorkin and his neighbours in Greenwich Village. In this chapter, he also remarks on the new crowds and the tourists, tipping his hat appreciatively to those who know the proper way to pronounce Houston (Howston) street. Sorkin also gives the history and emergence of the Loft, and how it has become a NY lifestyle as well as building type.

The chapter on Canal Street meanwhile is a critical look at the vision of lower Manhattan by Robert Moses, only a part of which was actually realized. In marked contrast, Sorkin’s notion of slow traffic in Manhattan – or even just the crosstown traffic in general – is in part inspired by his anxiety of approaching and preparing to cross Canal Street. As he puts it plainly, the street is inhospitable to pedestrians, explaining that the walk signals are barely timed for a pedestrian to cross, and remembering one time a traffic cop (necessary because of the numbers of large trucks) told him not to cross there. This and all the other chapters combine to reveal the author as the full realization of Walter Benjamn’s Flaneur, i.e. the contemplative walker.

The chapters on Tribeca and Hudson Park deal specifically with his studio space(s), the location changing slightly over twelve years. Moving into one new space resulted in a visit from two mobster garbage collectors who off-handedly threatened to throw him off the fire-escape. And according to the author, Robert de Niro owns a significant stake in Tribeca (which means ‘Triangle Beneath Canal Street’). Not surprisingly, the few empty lots around his office again often become film sets. Sorkin further points out that post-9/11 the area is heavily under surveillance by CCTV cameras. So much so that during one walk he counted over a dozen from the lobby of his office to the closest Starbucks.

Some of the richest parts of the book are when the author recounts the battles between Robert Moses and Jane Jacobs, both of whom not surprisingly figure largely throughout, along with Le Corbusier. Though Sorkin never comes out and says it, his admiration for the great Swiss master builder is apparent in the way he weaves several of his projects into his narrative.

In the book’s afterword – entitled Esprit d’Escalier (Escalator Wit) – the author ruminates on the events that have transpired in the twelve years since he began writing the book. The Twin Towers, which used to figure large in his daily walk, are now an absence that has become a matter of fact – “both reassuring and depressing” – along with the Homeland Protection surveillance gone wild around him. Where his previous book All Over the Map was largely concentrated on the events occurring after 9/11 in Lower Manhattan, his new book is a quieter, more gentle affair, poking fun at the rituals and manners of his fellow New Yorkers, including his own.

A must read for everyone and anyone who abides to Sinatra’s mantra to ‘want to be a part of it,’ as well as for lovers of architecture, Jane Jacobs, and city planning in general, the author here has achieved a balance of his own personal experience with each of us as we walk down our own city streets. And just as as a writer’s work is never done, Michael Sorkin will surely keep us up-to-date on current events, much as he did with his late 2012 post-hurricane Sandy article ‘Learning the Hard Way’.

Also currently writing for The Nation, in Twenty Minutes Michael Sorkin has given us a thoughtful reflection of a New York stroll, and we can look next to his musings of the new 9/11 museum and the much anticipated PATH station by Santiago Calatrava, coming soon to his ever changing city.