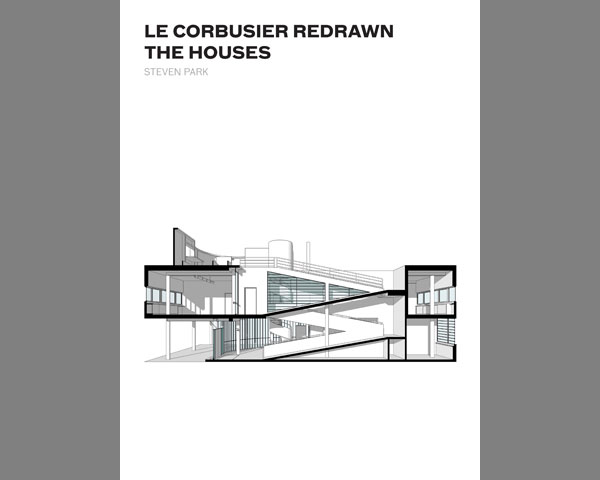 Le Corbusier needs no introduction in the architecture and urban planning circles. As a person who many consider a master of modern architecture and whose urban planning ideas – for better or worse – have greatly influenced the contemporary city, countless books have been written on the life and works of Charles-Édouard Jeanneret-Gris. The quality and content of these texts are as diverse as the quantity of authors who have written about him, and once one has read one or two books on the subject, it is a challenge to find another that brings in a new perspective. This being the case, Steven Park’s Le Corbusier Redrawn: The Houses has certainly done its part to bring a different dimension the residential works of Le Corbusier – both literally and figuratively.

The intent of the book is deceptively simple: to give readers a consistently drawn and comprehensive set of drawings of Le Corbusier’s houses. A feat that, surprisingly, has not been undertaken until now. Using original drawings from the Le Corbusier Foundation’s archives, Park recreated each residential project using 3D software and represented each project at the same scales in order to give readers a good idea of the spatial character of the buildings. One can only assume that this is the logical first step in creating architecture books that use Augmented Reality apps (like that currently being experimented with in drawing and art books – i.e. The Art of Journey and How to Draw) to give people a better 3-dimensional understanding of architectural works.

The twenty-six projects within the book are presented in chronological order – speaking to how his work evolved over time. Most of the project drawing sets include a series of cross-sectional perspectives, followed by the standard orthographic set – plans, cross-sections and elevations – scaled at 1:200. Some include larger scale site plans.

A short background write-up – a few paragraphs strong – is also included for each project. Given that the focus of the book is the drawings, each write-up remains broad, but is enough to give readers a general sense of the work.

For unknown reasons, a couple of projects – Villa Besnus and Villa Lipchitz-Miestchaninoff – do not include any three-dimensional images at all and rely solely on the orthographic drawings. Given that these are not part of Le Corbusier’s well-known projects, this is not necessarily a big issue, but still worth noting.

Overall, this is a great addition to the libraries of Le Corbursier followers. As implied in title and cover, Le Corbusier Redrawn: The Houses is not meant to be an in-depth study of his works and, I believe, is better for it. In rigorously compiling and displaying a consistent, spatially rich series of drawings, it stands as a unique and valuable addition to the vast quantity of existing books that look more deeply into his works.

For more information on Le Corbusier Redrawn: The Houses visit the PAP website.