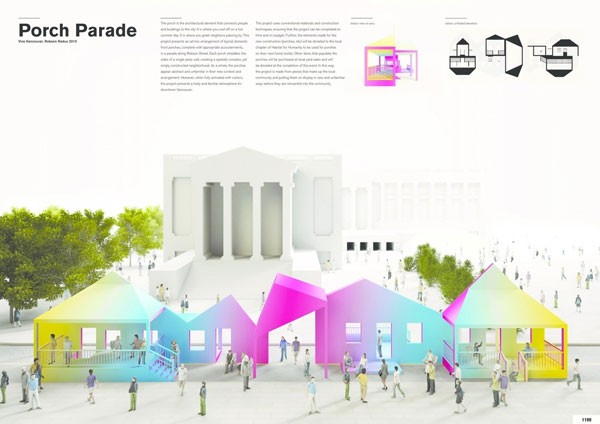 Summer is the time to get outdoors, and in the same spirit as the Serpentine Gallery Pavilion in London’s Hyde Park, the City of Vancouver has once again closed Robson between Hornby and Howe Streets in front of the south steps of the Vancouver Art Gallery, to examine the notion of public space in the heart of the city and giving primacy to the pedestrian over the car. As put on by Viva Vancouver, and now in its fifth year, this year’s Robson Redux features “Porch Parade”, the winning entry from young Chicago architects Stewart Hicks and Allison Newmeyer.

On the weekend before this past Canada Day, Stewart and Allison gave a brief presentation of their scheme (and at that point still under construction) at the Museum of Vancouver, at least for those willing to spend a couple hours indoors on a beautiful Sunday afternoon. Put on by both the MOV and Viva Vancouver, the 80+ entries were exhibited at the MOV in early March, just prior to the jury’s announcement of the winners March 18th. The jury was made up of prominent Vancouver urban thinkers – architects, curators and landscape architects – and they had their work cut out for them, as the caliber of entries has increasingly improved over the past five years. With the competition to innovate one of the city’s most important living rooms having resulted in last year’s “Urban Reef”, the bar was high for Stewart and Allison, along with the other entrants.

As described by the architects, the rationale behind the design has very much to do with what Allison and Stewart had noticed as missing from many of Vancouver’s homes, i.e. porches. One need only think of the ubiquitous Vancouver Special or worse, the McMansion monster-homes replacing many of the city’s older heritage stock, to realize they are bereft of this vital semi-public realm. In Chicago, as well as many other mid-western cities, the porch is very much the public face of the house to the neighbourhood, where happenstance meetings and informal conversations are able to occur naturally.

The two also admitted they were riffing on a comic sketch from the TV sitcom Scrubs, in which one of the characters buys a piece of land in the country but can’t afford to build a house on it, opting just to build a porch and then inviting over his friends to sit on it. In doing so, Allison and Stewart are pointing out the power of the porch on a single family home that acts as a transition between the world and the front door of the home, as a frame from which to contemplate one’s environs, and providing a catalyst for the breakdown of social barriers where casual conversation can occur.

With these two ideas firmly in hand, the pair embarked on an ambitious parti to realize their scheme, one that would range in scope from the French architect Jean Jacques Lequeu to the architecture of John Hedjuk. The point of departure for their design was then the interplay of three elements: character, connection, and construction.

For character, the pair dug deep, summoning the wisdom of Lequeu, specifically looking at how he defined character as something that was either essential, distinctive, or relative, with Allison and Stewart providing examples of each.

Having authored their treatise Misguided Tactics for Propriety Calibration as the design manifesto for their Chicago-based practice Design with Company, much of this can also be found referenced throughout, including a bizarre phenomenon in the small town of Mitchell, South Dakota, famous for a corn palace that they celebrate with a summer festival every year. As a curious object in the landscape that represents itself as a moment of peripheral architecture, “Porch Parade” likewise falls into this same category. Such whimsy and playfulness is most characteristic of the young couple’s practice, as also seen in another of their projects, “Shaw Town”, of which they showed a short film at their Museum presentation. The same whimsy of “Shaw Town” also plays out in the porches and their connection to the public, providing a stage in the city on which people can interact.

The playful use of colour for the porches also provides a launching pad for this connection, with its almost neon cotton candy hues provocatively poking fun at the dull concrete and asphalt surroundings. The pavilions are then a shot to the arm to the otherwise business-as-usual that represents Vancouver’s adjacent commercial district.

Perhaps nowhere is this more evident than by the Nordstrom department store that is transforming the city’s old Eaton Centre nearby, and which may also be responsible for the hasty departure of Chapters from its corner location at Robson and Howe St., forsaking its purpose built digs as the latest victim of the area’s skyrocketing rental rates. Sadly, no one will be reading books on Allsion and Stewart’s porches, as there is now no where left downtown to buy a book.

For the third element of the couple’s design triumvirate – construction – Allsion and Stewart enlisted the help of structural engineers at Arup no less, in order to ensure the safety of the porch paraders. As a precedent, the pair tip their hat to John Hedjuk’s wall house, a theoretical construction in which an entire house is built off of a single wall. This is clearly evident in the design of “Porch Parade”, the composition of which is essentially a two-sided boom-town store front, requiring that the wall running down the centre of the construction to be self-supporting, and as they noted at their presentation requiring Arup to pour an 18,000 lb concrete base counterweight underneath the porches to support the tall vertical cantilever that the porches are built off of.

The competition entry’s most provocative image by far, and perhaps one of the deciding factors for the jury, was most certainly its colourful streetscape elevation. Set before the south façade of the VAG with its people watching steps, the design suggests a modern spin on the ancient Greek Pan-Athenian procession that used to occur each year in Athens — winding its way from the city’s agora to the acropolis, with the Parthenon prominently overseeing the proceedings.

With “Porch Parade” now open to the public as of Canada Day, Vancouver’s answer to the Serpentine is now free to peruse by curious onlookers passing through the area, having most recently provided much needed shade from our record breaking temperatures. With a fleet of food trucks also now serving the area, this colourful civic intervention is a most formidable continuation of this City of Vancouver initiative where residents and tourists alike can pause in the busy downtown atmosphere, to reflect on what it means to live in our fair city. Likewise, it provides a showcase for this young, new Chicago firm and their founders, themselves both teaching architecture at the University of Illinois. Branding themselves as Dw/Co, short for Design with Company, their future looks to be as bright as the vivid colours decorating their porches, to remain a part of Robson Square’s scenography up until the summer’s end.