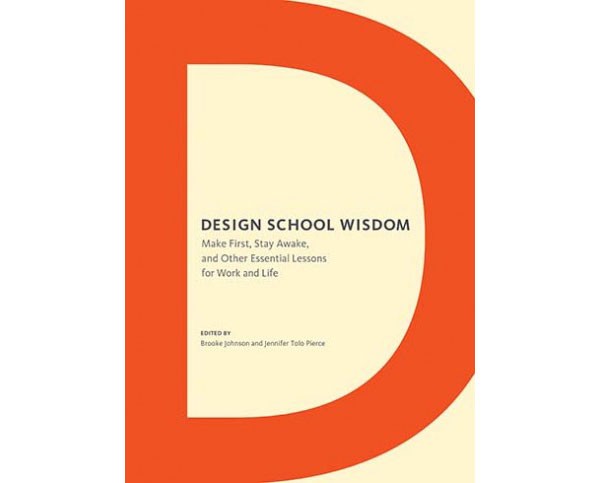 Design School Wisdom was born out of a desire to share the wisdom of design instructors with designers everywhere – students just entering their studies or recent design school graduates starting their first jobs, designers well into their careers, or seasoned pros who can still benefit from the wisdom of their peers. We asked teachers and students from across the country and beyond for their pearls of design school wisdom, and we received varied and enthusiastic replies. As this book has taken shape, we have been continually inspired both by the words themselves and by the spirit in which they are shared.

In our current age of the twitter feed and sound bite, brevity seems to have become the new virtue, made necessary as our lives grow increasingly more and more burgeoned with texts, emails, and other new social networks, vying for our attention. Similarly, where once the traditional studio-based model of a design school education was the norm, now more and more the old delivery method is having to share the stage with online tutorials and computer-based examinations, all having the unfortunate outcome that students are being less and less exposed to the erudition of actual people who are practicing in the professional world.

Perhaps partially for this reason, the last few years have seen the release of a number of architecture books that have attempted to correct this shortcoming, capturing the nuggets of a design school education. Princeton Architectural Press’ The Architect Says – in which famous architects give sagely advice – and Matthew Frederick’s 101 Things I Learned in Architecture School, are a couple that come to mind. And just last week, architect and writer Michael Sorkin added his own two bits, blogging 250 Things Every Architect Should Know, a list which I might add is certainly not meant for the faint of heart, as seen in his placing the rate which sea levels are rising between Victor Hugo’s this will kill that and Building Information Modeling.

Much in this same spirit, designers Brooke Johnson and Jennifer Tolo Pierce have given us Design School Wisdom: Make First, Stay Awake, and Other Essential Lessons for Work and Life. This modest volume of 128 pages, much like Matthew Frederick’s 101 Things, seeks to distill the most useful and practical advice from both designers and educators alike through a series of quotes, aphorisms, and interviews, tipping its hat to the age old adage that good design is 10% inspiration and 90% perspiration.

Beginning with a series of quotes including such advice as “Always be learning” and “Don’t let it look like you got Photoshop for Christmas,” there is a naiveté accompanying the narrative of the book, tempered with the brick wall reality that eventually the design student must leave the protective bubble of school – whether Yale or the Vermont College of Fine Arts – to ply their vocation in the real world. While the book is mostly written by and about graphic designers, the authors have enabled the term ‘design’ to encapsulate this activity in every corner of every profession, such that an architect seeking inspiration at the beginning of a new project can avail themselves to the book’s contents as much as a computer programmer working on a new algorithm.

If there is one thing missing from the book, and not just in this one but the others mentioned above (with the notable exception of Sorkin’s list), it is this: Design school is hard, brutally so at times. All designers share in the experience that at times tested their mettle, whether by an overly severe professor or the inability to resolve a certain design problem. One must be careful not to sugarcoat the pursuit for this reason – design is not for everyone. As anybody that went through a design program will attest to, many people drop out at various stages having come to terms with this brutal reality on their own.

That is not to say the pursuit is a masochistic enterprise, but rather that one must come to it prepared, already marching in sync to its drumbeat before attempting to enter the walls of its academia. Many would-be designers have made the mistake of showing up for their first day of class believing that design can be taught. This is simply not the case, and if there is a pearl that I could offer to the authors of this book, it is that the first lesson of design is that there is no lesson, a variation on Socrates famous quip “I am wise because I know I am not wise.”

In one section of the book, we encounter what would appear to be diary entries from a design student writing about her professors, musing upon one who reprimanded her (albeit in the hallway outside the classroom) for wearing an outfit to class that clashed. Such a humiliating moment here makes the important point that designers are more vulnerable than others to such affronts, taking them terribly personally. To have one’s aesthetic sensibilities reprimanded as a designer is akin to telling a fish that they are swimming wrong, and the one piece of advice that is most certainly inferred is that in design school one must never take criticism personally!

In the end, Design School Wisdom is a richly choreographed compilation of design advice, with something relatable to everyone in each and every story, whether quoting Buckminster Fuller (“How often I found where I should be going by setting out for somewhere else.”) or recalling the sense of community among one’s fellow students while in school. And certainly as it is told in a young, hip style, complete with references to Skype and J-Lo, such a book is most intended for the young student in graphic design, but as the authors themselves note in the introduction, it may be enjoyed by both young and old, and by all the different design schools, whether graphic design, architecture, or interior design.

Lastly, and most importantly, the book reminds us to cultivate our sense of humour, and that, in our all too serious times, we need to have the ability to step back and laugh. It is through our cultivation of this sense in school that we will learn why the same things matter so much more in the real world. Such a lesson extends to making money, much as Steven Skaggs from the University of Louisville rightly points out: “If you are going into design for the money, you won’t make any money at it.”

Such truisms and many more may be found within Design School Wisdom, making it a timely and relevant commentary of our current design culture.

Sean Ruthen is a Vancouver based architect and writer.