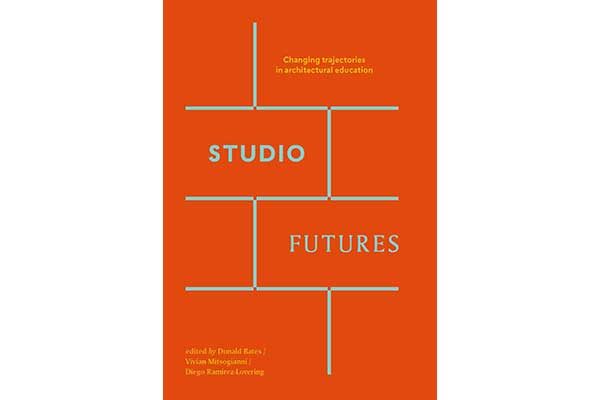 The design studio is a central part of the design education, particularly in the fields of architecture and urban design. For more than 200 years it has served as the foundation of architectural culture. As such, the effects of how it is taught, its content, and the relationships it fosters between the future-practitioner and built environment are extremely long-reaching—ultimately influencing the culture of design of each successive generation and how they shape their built world. This being the case, and in the face of the drastically urbanizing contemporary world, turning a critical eye to design studios seems paramount. And this is exactly focus of Studio Futures: Changing Trajectories in Architectural Education.

The first in a series of publications supported by the Association of Architecture Schools of Australia (AASA), Studio Futures is a collection of essays and texts by a variety of educators, including several who are also practitioners. The book is structured around three essays by the editors that frame broader issues, that are scattered amidst twelve cases studies and four commissioned pieces—concluding with an interesting survey that highlights selected responses of the contributors to specific studio-related questions. Some imagery accompanies the text, but the focus remains dominantly on the written content.

As is evident by the supporter of the book, the content dominantly refers to the Australian context, with contributions from people associated with schools such as RMIT University School of Architecture and Design, University of Melbourne (Melbourne School of Design),and Monash University Faculty of Art Design and Architecture. However, given how similar the studio-related issues are globally, the Australia-based content takes absolutely nothing away from the relevance of the essays.

To delve into the content of each essay is well beyond the scope of this review. Suffice it to say, the editors did very well in selecting essays that cover a very wide range of issues and topics, very much in keeping with their desire to bring together pieces that were “interesting and suggestive” and “provoke further discourse and speculation.” From essays that describe specific studio courses, their structure, and successes and failures, to ones that discuss the challenging relationship between studio projects, the discipline, and professional practice, Studio Futures offers readers a wealth of information and perspectives.

Reflecting the changes in architectural education in response to global challenges, it is important to note that the content does not focus solely on ‘buildings’. Instead, many pieces touch upon community engagement, urban design, landscape architecture and connections to the industry, at large.

As a studio instructor, myself, Studio Futures delivered a wonderfully diverse and critical reflection of current academic practices. From offering ideas for new studios and their respective frameworks, to forcing me to actively question the larger implications and underlying assumptions of the many courses I have created, I do not hesitate to say that it has deeply affected my approach to, and perception of, the design studio—its opportunities and limitations. This being the case, I highly recommend it any and all professors and instructors of architecture and urban design studios, as well as those in charge of running architecture and design programs.

The fact that the built world is simply an extension of an education system through its practitioners, is often overlooked by the public at large. When problems are recognized (i.e. the negative implications of low density developments, etc.), it is often easiest to look for smaller singular causes instead of broader systemic errors. This makes it easier for problematic conditions to become normalized within the larger education system. Given the state of our settlements and importance of design studios with its far-reaching implications on the built landscape, it is very clear that we are in dire need of more books like Studio Futures.