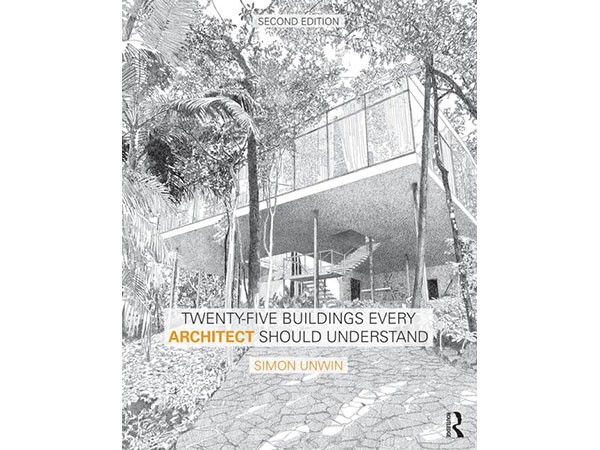 Five years after the publication of his well-received book Twenty Buildings Every Architect Should Understand, Simon Unwin and Routledge kicked off 2015 with the publication of a Second Edition. Explicitly outlining the changes within, the expansion and revision of the original prompted a renaming of the book to Twenty-Five Buildings Every Architect Should Understand (underline added).

Given the strength of the First Edition – reviewed previously on Spacing Vancouver here  – the news edition has stayed true to the original intentions. As outlined in the Introduction to this edition, Unwin reiterates his desire to use his case studies to explore the possibilities and power inherent to architecture, as well as test the analytical methods offered in his previous book Analysing Architecture. Furthermore, he states:

The original twenty buildings were selected to…explore a range of relationships between architecture and person. I have applied these criteria again in selecting five more buildings to analyse.

As with the past book, the new case studies are from around the world, including one from India (Ramesh House), Germany (Mohrmann House) and Brazil (Bardi House). The following is a complete list of houses included:

Over and above the new buildings, there are some smaller changes that improve the original book. These include an expansion of references, as well as a slightly different layout structure that allows Unwin’s wonderful analytical drawings to be larger.

Similarly, where initially a series of quotes open each building analysis, they are now distributed throughout their respective sections. With respect to the quotes, the original design was visually less obtrusive, but if the latter is the price paid for more content and larger drawings, I would say one still comes out well on top with the 2nd Edition.

As with his earlier book, I do not hesitate to say that Twenty-Five Buildings Every Architect Should Understand is simply an excellent book – worthy of the bookshelves of students of architecture, practicing professionals and architecture enthusiasts, alike.

For more information, visit the Routledge website. Visit Simon Unwin’s website to see all his books including his wonderful eBooks series. You can also read the Spacing Vancouver review of Analysing Architecture here.