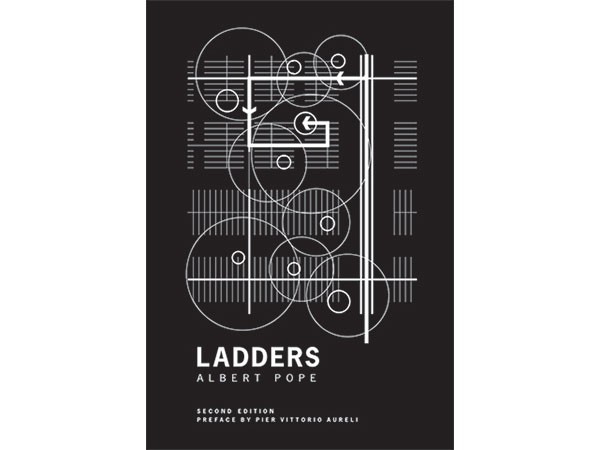 “The contemporary city, the city that is at this moment under construction, is invisible.”

So begins the journey into Albert Pope’s recently republished Ladders, and one is hard pressed to think of a more provocative statement to start a book.

A little background on the book is required. Book #34 in the Architecture at Rice series, the first edition of Ladders was originally published in 1996. At this time, it quickly became a seminal work in the field of urbanism. Through lucid, dense prose and clear diagrams, Albert Pope – Professor of Architecture at Rice University – critically examined the concepts and theories that guided the evolution of the postwar American City.

Its superbly crafted analysis and speculation on the nature of urban and suburban form became a thing of myth within the field – being constantly referenced both informally in conversations, and formally in other books of merit.  More so, after it quickly went out of print.

I was of the generation that just missed the curve, learning about the book shortly after it went out of print. Given the nature of the book, it was only available—and remains so—in a select number of academic libraries belonging to schools (typically) with architecture programs. As such, access to the book was, and continues to be, extremely limited aside from online excerpts and the occasional website.

One can imagine, then, my excitement upon hearing about its republication earlier this year. According to Princeton Architectural Press, Ladders was one of their “most requested out of print titles” and after reading it, I understand why. Although almost two decades, its content remains as relevant and compelling as ever.

Although the argument put forth in the book is too intricate to adequately explain in a short review like this—and outlining its chapter’s names would not add much to the true understanding of the content—Pope attempts to describe the qualities of contemporary urban space. In the words of Pier Vittorio Aureli, who writes the new preface to the 2nd edition, Pope provides a theoretical framework through which “we can actively think the city.” After all, how can we engage the city, if we don’t have a means of explaining and understanding it.

In order to do so, Pope must chart new territory and develop a new vocabulary. Towards this end, he intricately describes the  transformation of the space and form of the city, from an “open, centrifugal” model (think of the infinitely expanding grid of 1811 Manhattan) to a closed, centripetal organization (gated communities being an extreme case, for example) composed of the book’s namesake, ’ladders’. Piqued your interest? Consider that a teaser.

It’s an incredible and elaborate story, tying together a thoughts and works of a number of urban theorists, architects and designers. Some of the usual suspects pop up – Frank Lloyd Wright, Le Corbusier, etc. – but various currently lesser known characters dominate the book, including Ludwig Hilberseimer, who plays a large part in the content.

A handful of new sections accompany the 2nd edition. As mentioned above, there is a new preface by Pier Vittorio Aureli, two short addenda (one to Chapter Three: The Inundation of Space and another to the final chapter), as well as a postscript by Sarah Whiting. All great additions.

The quality of the content notwithstanding, it is worth noting Ladders requires a good understanding of the subject and the people an theorists mentioned above.  As such, it may be beyond the interest of a lay reader looking for a more general outlook. However, for those actively involved in the field—landscape architects, urban planners, architects, urban designers, etc—it is a required read, to my mind. And with Christmas around the corner, there is no reason not to have it on your last-minute list.

Sarah Whiting sums up the importance of this book in the opening sentence of the postscript:

“Within the twenty-first century, almost twenty years after the Ladders was first published, we find ourselves still without a response to the book’s central provocation: Why hasn’t our thinking about contemporary urbanism caught up with the realities of contemporary urbanism?

Get it, before it goes out of print again!

**
Erick Villagomez is one of the founding editors at Spacing Vancouver. He is also an educator, independent researcher and designer with personal and professional interests in the urban landscapes. His private practice – Metis Design|Build – is an innovative practice dedicated to a collaborative and ecologically responsible approach to the design and construction of places. You can see more of his artwork on his Visual Thoughts Tumblr and follow him on his instagram account: @e_vill1.