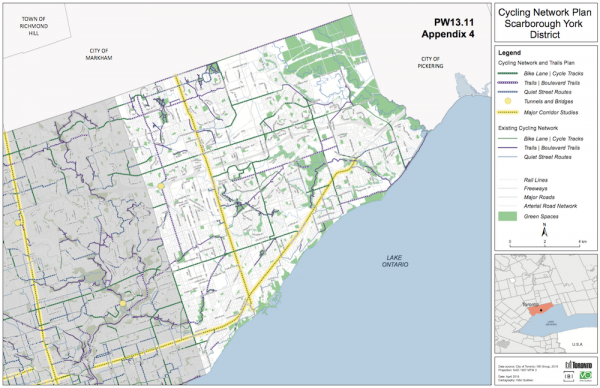 On May 16th, the City of Toronto Public Works and Infrastructure Committee (PWIC) recommended that City Council increase annual capital funding to $16 million for the proposed Ten Year Cycling Network Plan. This figure was recommended by Transportation Services staff and roughly doubles the City’s annual spending on cycling infrastructure. The plan calls for a total of 525 km of new cycling infrastructure throughout the city, including 280 km of bicycle lanes or cycle tracks on what the staff report refers to as ”Fast, Busy Streets”, 55 km of sidewalk-level boulevard trails also along ”Fast, Busy Streets”, and 190 km of cycling routes on ”Quiet Streets”.

In a previous post, I highlighted what Scarborough residents could expect from this new plan. To re-cap, building cycling infrastructure on major corridors like Kingston Rd., Danforth Ave., and Midland Ave. would improve transportation options, especially in southwest Scarborough, which has the highest levels of cycling mode share.

Therefore, it is promising that sections of both Danforth Ave. (between Broadview Ave. and Danforth Rd.) and Kingston Rd. (between Danforth Ave. and Eglinton Ave. E.) are slated for major corridor studies during the first three years of the plan in 2017 and 2019 respectively. A major corridor study is used in locations that would achieve an important cycling network link but where the streets are already intensely used for a wide range of existing activities. As part of the study, traffic impacts are assessed and affected stakeholders, such as residents and business owners, are consulted before new cycling infrastructure is introduced.

Another notable feature in the plan is the potential to install sidewalk-level boulevard trails along Fast, Busy Streets where space is available. This is significant because currently there are limited examples of this kind of cycling infrastructure in Scarborough (e.g., Ellesmere Rd. between Helicon Gate and Military Trail). Installing sidewalk-level boulevard trails should be further investigated and widely implemented since they have the potential to unlock latent demand for suburban cycling without the need for costly and prolonged road reconfigurations. Unfortunately, the plan identifies possible installation of sidewalk-level boulevard trails in only three locations: 1) Midland Ave., scheduled for 2022-2024, 2) Warden Ave. between Highway 401 and Bamburg Cir., scheduled for 2025, and 3) near Warden Station on St. Clair Ave. E., scheduled for 2019. 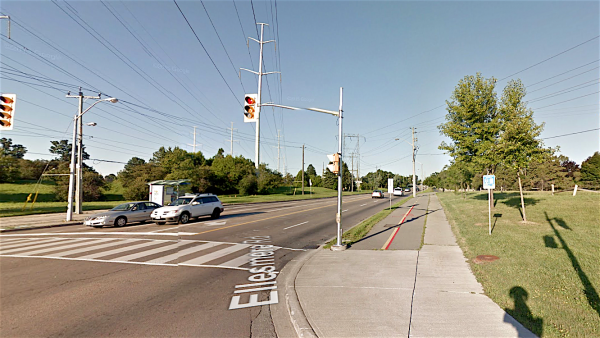 This $16 million of cycling infrastructure investment is encouraging, however it should be noted that PWIC members also voted to put on hold all of the planned eight major corridor studies (with the exception of three short segments on Bloor St. and Yonge St.), representing 100 km of the 525 km of cycling infrastructure. Members argued that this would allow time to gather feedback and data from the Bloor St. bike lane pilot project scheduled for installation in fall 2016, and provide an opportunity for upper levels of government to fund these future studies.

Technically, the eight major corridor studies for 17 segments of Yonge St., Danforth Ave., Bloor St., Kingston Rd., Midland Ave., Jane St., Kipling Ave., and Lake Shore Blvd. W., were not scheduled to start until after two years, so the practical implication of a two-year delay remains unclear. However, several of these corridor studies are scheduled for areas outside of the downtown core where the roadway widths, vehicular speeds, on-street parking and loading issues are quite different to downtown. As a result, the Bloor St. bike lane pilot outcomes, to be revealed in late 2017, would likely have negligible relevance for major corridors in Scarborough, Etobicoke, and North York. Given the historical neglect of cycling infrastructure in Toronto’s suburbs, this further delay will more firmly entrench the infrastructure gap between the downtown core and the outer neighbourhoods of our city.

A ­May 2016 Angus Reid Forum poll revealed that 88% of Scarborough residents support a comprehensive, interconnected and safe cycling network. In addition, 69% of Scarborough residents said that the City urgently needs to create better bike infrastructure. The poll also revealed other important insights such as the absence of an urban/suburban divide when it comes to support for the completion of a safe cycling network and that there is support across the city for immediate increased investment in cycling infrastructure. Finally, the poll results also showed that a majority of residents feel that physically separated bike lanes would facilitate traffic movement.

All things considered, Toronto’s new plan will eventually help to address several key gaps in Scarborough’s existing cycling network, including Danforth Ave. and Kingston Rd. Building cycling infrastructure on these corridors will also leverage the efforts of our Scarborough Cycles bike hubs located at AccessPoint on Danforth and Birchmount Bluffs Neighbourhood Centre, near Kingston Rd., both of which are offering several programs to help build and develop cycling culture in Scarborough. On June 7th, Toronto City Council will decide whether or not we will move ahead to create a city-wide safe cycling network that equitably serves all areas and residents in the city, or whether we will risk further delaying this critical transportation option for generations to come.