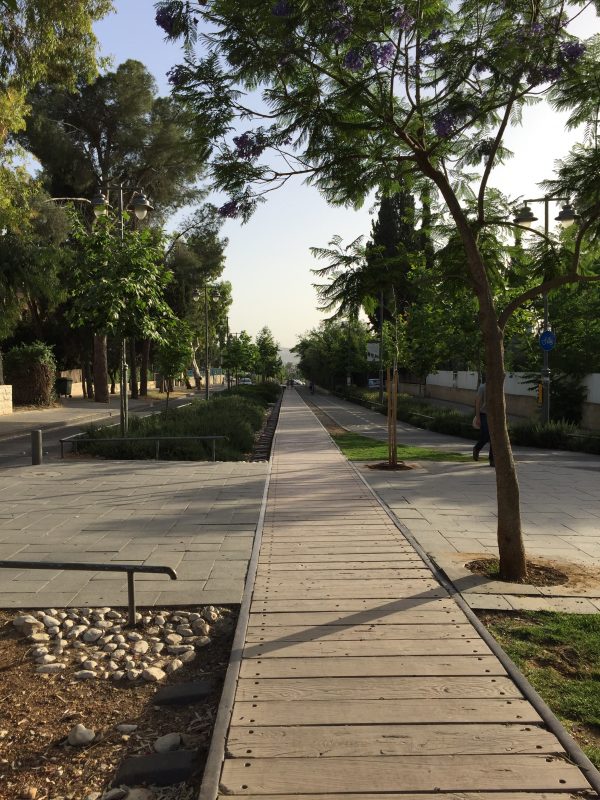 This post by Michelle Kearns is part of Spacing’s partnership with the Toronto Cycling Think and Do Tank at the University of Toronto. Find out more about the think tank, and the series, here.

As a planning student and research assistant at the University of Toronto, I was happy to participate in a Jerusalem study tour this May, hosted by Hebrew University Jerusalem and my school’s Urban Studies program. We spent four busy (and sweltering) days in Jerusalem, both East and West, guided by local architecture and planning students, professors, and professionals. The city is home to three very distinct social groups—each with their specific needs, wants, and use of space: Jewish/Secular, Ultra-Orthodox Jewish (mostly in West Jerusalem), and Arabic speakers, typically of the Islamic faith (mostly in Eastern Jerusalem’s Palestinian neighbourhoods).

Other than the outrageous heat, one of the first things that’s apparent in Jerusalem is that it is a divided city, especially in regards to mobility. Streetlights in West Jerusalem never allow traffic and pedestrians to mix, even when cars are turning—safety seems to be paramount. Bikes whip by in every direction, but either in clearly marked bike lanes or on wide sidewalks, away from pedestrians and vehicles. The active mobility needs of West Jerusalem residents are addressed with modern improvements in infrastructure, which seemed to contrast with what our group saw when we were brought to East Jerusalem—an underlying theme to be aware of when analyzing Jerusalem’s cycling infrastructure.

West Jerusalem has multiple impressive sections of cycling infrastructure. The first bikeway we came across was a multi-use pathway at the newly developed Railway Park, an adaptive reuse project that turned a former key rail artery for West Jerusalem into an 8km long linear park with separate cycling and walking paths. According to a local planner, the residents along the rail path united to fight against the initial plan to turn the disused space into a high-speed road for cars. Community members demonstrated, participated in consultations, and worked together to create a pro-park campaign. It worked. Now, active transportation infrastructure enhances community cohesion in a neighbourhood previously divided by barren train tracks—protecting urban biodiversity as an ecological corridor helping to link isolated parks throughout the city.

As in Toronto, cycling is a popular mode of transportation for university students. Hebrew U sits atop Mount Scopus, a spot that is rather isolated from the city itself, straddling East and West Jerusalem. From the West Jerusalem entrance, a bike lane serving as a direct route to the campus is protected from traffic, both with a curb and a lane for parked cars. Many students ride to class from the nearby student village. In contrast, the East side of the campus, which faces an Arab neighbourhood outside the walls of The West Bank, is subject to various regulatory constraints by the state. These include height limits on buildings and a restriction on building roads connecting the East and West through this neighbourhood—entry and exit points are controlled. There is only one road to the campus from the East, making a convenient cycle link to the university impossible. Students from the East who were part of our tour group expressed frustration at their relative lack of bicycling mobility and felt that the neighbourhood was contained with infrastructure, not mobilized.

Despite Jerusalem’s incredibly complicated situation—there are still facets of cycling culture and infrastructure that are relevant to Toronto. The terrain is difficult—it’s hot and incredibly hilly. Coming from Toronto, I expected that the city’s hot temperatures would be cited as a rationale for neglecting cycling infrastructure, since in Toronto, some consider our snow and cold winters to be a barrier to cyclists and even a justification for neglecting active transportation infrastructure. Bike culture in Jerusalem, however, has found strategies to overcome the challenges of weather and topography. 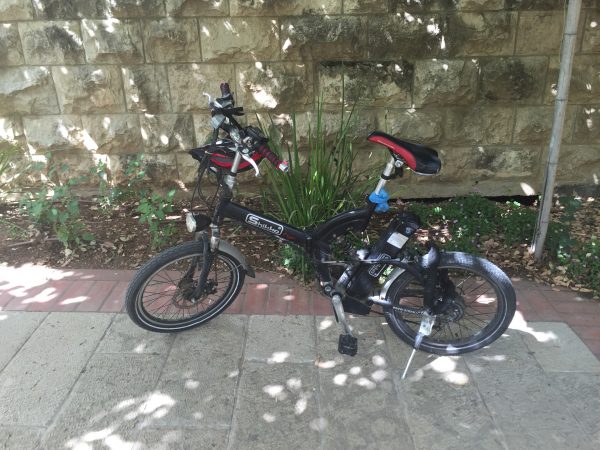 The most popular type of bike in Jerusalem is folding, battery-powered, and electricity-assisted. Buses aren’t equipped with bike racks and many people reside in apartments, so the folding capability allows for easy transport and storage. A Hebrew U professor remarked that these bikes are a relatively new addition to Jerusalem streets, but you’d be hard-pressed to find someone riding anything else—it’s a city of electric converts. On hot days, the extra battery-powered boost opens doors to cycling as a sustainable transportation choice for people of varied fitness levels. This technology helps to overcome challenges posed by environmental circumstances and makes a case for fostering bicycling infrastructure in cities with terrain or climate challenges.

Our group spoke with many local professionals of all backgrounds. Deputy Mayor Tamir Nir was kind enough to meet with our group to talk about transportation in Jerusalem. The conversation reminded me of Toronto’s own struggle to make sense of how to best use road space. Automobile traffic in Jerusalem is no different than the rest of the world—it’s aggressive, loud, and busy. Public transportation in the holy city is crucial, since the city include a large population of very poor people, of both Jewish and Muslim faiths. Nir has become a champion for bike infrastructure development. He spoke about how difficult it can be to change minds on council regarding cycling as a legitimate form of transportation—something that is very familiar to those of us who watch council debates in Toronto. He continues to work on that conundrum. The Deputy Mayor is also part of the team leading the planning and building of Jerusalem’s LRT system, which opened its first line in 2011.

Nir spoke to two significant controversies about the LRT project, one Jerusalem-specific and one more familiar to Toronto: 1) Nir wants to provide mobility for the Arab population, create better access to jobs, and build relationships between the two divided sides of the city. 2) The creation of an LRT-only right-of-way on busy central Jaffa Road would remove car parking. After plenty of discussions challenged by virulent criticisms by fellow council members, taxi drivers, and the general car-driving public, the Jaffa Road proposal went through—no cars, only LRTs and bikes. Since this installation, Jaffa Road and the city’s downtown street life has thrived, socially and economically, as local businesses gained a spike in sales from the increased number of pedestrians, cyclists and transit riders accessing their shops and services. Sometimes taking risks, such as LRT-only Jaffa Road, allows new paradigms to shine through as cities slowly move away from mid-century car-centric planning.

Building infrastructure is not a one-size-fits-all system across cities. One Jerusalem-specific challenge includes another project from Deputy Mayor Nir: Jerusalem bike share. The bikes are meeting great opposition from Ultra-Orthodox neighbourhoods who want to preserve their strict electricity and work-free Shabbat. Certain stations won’t be operating on Saturdays in an attempt to strike a compromise, but some religious leaders are still not happy having bike share stations in their neighbourhood.

Jerusalem is a complicated city. To my fresh eyes, the cycle infrastructure seemed wonderful—in West Jerusalem. But you cannot speak of Jerusalem without acknowledging incredible hardships faced by those who live in areas where their children have no sidewalks to walk on let alone bike lanes to cycle on. Traffic and cycle infrastructure planning in West Jerusalem is worth some praise–Toronto should take notice of what can be done for a city by taking risks, such as removing parking on a main road so LRTs can move seamlessly. Toronto, however, needs to ensure that improving active transportation infrastructure is geographically and socially equitable.

The Toronto Cycling Think and Do Tank’s Scarborough Cycles project is one step towards understanding how active transportation can work in areas typically (and erroneously) thought to be homogenously car-dependent. Continuing to take context-specific cues from cities across the world and adapting their steps towards building an active transportation network will help Toronto be the city it so desperately wants to be—one where we can move through the streets safely, quickly, and without fear, by foot, bike, or other modes of transportation.