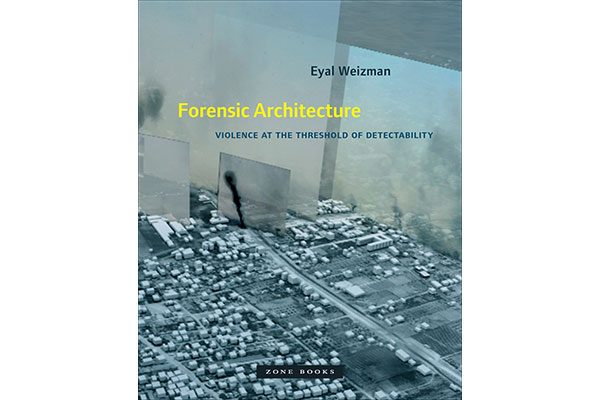 I was as surprised as anybody: consoling a number of design students in the foyer of the Museu d’Art Contemporani de Barcelona (MACBA) after spending three hours navigating the third floor exhibit. We were the last ones to be ushered out of the space and emotions overtook them as they walked down the crisp white ramps of the Museum. I was one of two instructors lucky enough to be asked to take this group to Barcelona as a part of the Interior Design program at Kwantlen Polytechnic University, and we unexpectedly chanced upon Eyal Weizman’s Forensic Architecture: Towards An Investigating Aesthetics exhibit at the MACBA.

Many may not know Weizman’s work. Author of a no less than 15 books since 1998, he is an Israeli architect, and professor and director of the Centre for Research Architecture at Goldsmiths, University of London. I first came across his work in 2006, upon reading his excellent piece in LOG Magazine (#7), Lethal Theory, that describes how war reinterprets architecture and the city. Shortly thereafter, he published Hollow Land: Israel’s Architecture of Occupation (Verso, 2007), one of his more popular books, that highlights the relationship between war, control, architecture and infrastructure in the context of the Israeli and Palestinian conflicts.

In 2010, Weizman founded the independent research agency Forensic Architecture (FA) out of Goldsmiths, University of London. Composed of an interdisciplinary team of investigators that includes everything from architects, scientist and filmmakers to archaeologists, coders and lawyers, the unconventional practice is approached to provide evidence for international courts “political and legal forums, truth commissions, courts and human rights reports” through critically analyzing the built world. Broadly speaking, they use the careful study of architecture and material effects (of armed conflict, etc.) on the built environment to uncover human rights violations and state crimes around the world. Given the nature of their practice, they work alongside a wide range of groups such as Amnesty International and the United Nations.

Weizman’s most recent publication, Forensic Architecture: Violence at the Threshold of Detectability, describes the practice, its methods and historical underpinnings through recounting several investigations they have undertaken since its founding. The MACBA exhibition I visited with the design students was the counterpart to the publication with various animations, 3D models, interactive maps and other evidence related to the investigations featured in the book.

Given their relationship, both exhibit and book have similar content, yet make the best of their respective formats. The content of the book is divided into four sections—Introduction: At the Threshold of Detectability, Part 1: What is Forensic Architecture, Part 2: Counterforensics in Palestine and Part 3: Ground Truth—and delves into details different than the exhibit, particularly around the nature of forensic architecture as a discipline. Despite having similar divisions of information, the strength of the exhibit lies in its use of interactive material products and artifacts. It dazzles all the senses.

As alluded to in the title of the first section, the Introduction outlines the conditions that define the “threshold of detectability” by way of historical narratives, starting with the controversial David Irving libel suit filed against American historian Deborah Lipstadt and Penguin books, in 2000. Irving’s suit focused on denying that Jewish people were murdered by gassing at the Auschwitz extermination camp and hinged on the absence of explicit visual evidence that supported that gassing had actually occurred. At the centre of the problem was the moiré interference pattern that resulted from the interaction between the resolution of the satellite imagery used to represent the Crematorium and the size of the grain in the “emulsion of the film” on which it was represented. Thus, small elements, such as people or gas chimney’s shafts were unidentifiable blur marks. In the absence of visual evidence (of “four small holes”, to be specific), Irving argued that the events never took place.

Through this example, Weizman definition of “the threshold of detectability” becomes clear: referring to “things that hover between being identifiable or not” even with the use of sophisticated modern technologies. This opens the doors to understanding Forensic Architecture as a practice that actively uses their skills and access to advanced technologies and techniques to decipher wrongdoings whose effects have left traces on the built environment. This is done in light of the unequal access to visual technologies, signals, and therefore, knowledge that is taken advantage of by political powers, particularly in the context of war.

With this foundation, Part 1: What is Forensic Architecture? outlines the history and nature of field—its methods, vocabulary, assumptions, limitations and challenges. It highlights their connection to building surveying, and the use of buildings as historical documents. It focuses on the powerful idea that one can gain insight to environmental, historical, a political forces (such as violence) through ‘reading’ a built environment. Also discussed is the importance of ‘forensic aesthetics” and representations required to use as supporting evidence—from animations and videos, to physical and digital models.

Part 2: Counterforensics in Palestine focuses on two FA investigations undertaken in 2014: the killing of two Palestinian teens in the West Bank town of Bituniya on May 15, 2014 and the horrific destruction resulting from an Israeli manhunt in Rafah on August 1st, 2014. Two shorter accounts of Israeli-Palestine investigations supplement the latter, highlighting the methodological approaches to their work as well as political challenges. Although the reality of violence and conflict weighs heavy throughout the book, this section is particularly burdensome, with the unbelievable events in Rafah being some of the most horrific.

The final section, Part 3: Ground Truth, shies away from the bloody violence of Part 2 to look at the forced displacement of the Bedouin population living along the northern border of the Negev/Naqab desert by the Israeli government: a process that involves the illegalization and erasure of their villages along this ever-changing natural boundary. Within, issues around the use of ecology as a political tool for colonization, the act and implications of forced urbanization, and impacts of climate change on the desert frontier are discussed in relation to the Bedouin community and their struggles with government forces. The discussion thoughtfully closes the loop with Auschwitz case introduced to opening of the book, showing how both had challenges resulting from image resolution and information ‘at the threshold of detectability’. A very short Postscript describing a case involving the killing of a Bedouin villager and Israeli policeman on January 18, 2017, as a police force raided the village, closes the book.

Given the above, one can see how the design students—confronted with some of the cruelest realities of the contemporary world—were brought to tears. One can’t help but feel helpless in the face of such forces, and admittedly, even I had a tough time reading certain sections of both the exhibit and book. But this in not a negative criticism, it is one of its many strengths. Forensic Architecture highlights critical issues that must be discussed, as uncomfortable as they make people feel. From the importance of representation and the nature of visual evidence, to the use of seemingly benign elements (i.e. ecology) and land-use towards violence and oppression, the book exposes readers to a candid, much-needed understanding of the relationship between settlements, architecture, politics, and violence. This awareness is even more important in developed countries whose advocacy is necessary for wrongdoings like those described within the book to be recognized. There is no time for complacency.

To those trained and/or practicing as designers and architects, I would argue that Forensic Architecture is a beacon of optimism and strength, not helplessness. It demonstrates how the skills and knowledge of those who design the built environment can contribute positively against intimidating forces—both large and small—through mobilizing their critical awareness of the material world and powerful knowledge of visual representation. This was my consolation to the students that day. Forensic Architecture the practice, book and exhibit empowers and inspires, as much as it unmasks horrors. This being so, I don’t hesitate in saying that Forensic Architecture is an eye-opening, essential read for architects, designers, planners as well as those looking to understand how powerful analytic thinking can be used towards fighting for human rights.

For more information on Forensic Architecture: Violence at the Threshold of Detectability, visit the MIT Press website.

If you are in Barcelona, the Forensic Architecture: Towards An Investigating Aesthetics exhibit is on at the MACBA until October 15, 2017. Visit the MACBA website for more information.

Be sure to visit the excellent Forensic Architecture website to access a wide range of information (videos, drawings, photographs, etc.) on the many investigations carried out by the practice, including those included in the book and exhibit.