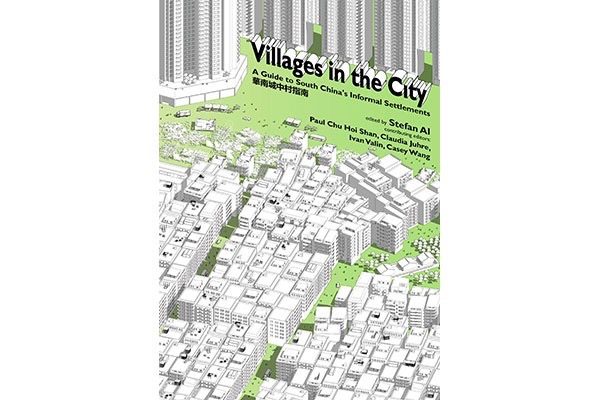 Although writing and research on informal settlements has increased significantly over the past decades, works that attempt to accurately capture and represent the physical characteristics of these environments remain few and far between. The reasons are straightforward: gaining access to these settlements remains challenging for most. If admission is given, measuring a critical mass of often irregularly configured physical spaces is an extremely difficult task….after which one is confronted with daunting task of translating the measurements to drawings. This is that much more challenging if one wants to engage both the interior and exterior spaces of an informal settlement.

This being the case, those who manage to succeed are rare….and books published that house this knowledge are invaluable. And so it is that the compact frame of Stefan Al’s Villages in the City: A Guide to South China’s Informal Settlements belies a wonderfully unique and comprehensive glimpse into the urban villages that are an integral part of the conurbations of the Pearl River Delta.

Simply structured, the book is roughly divided into two broad sections—one word-based, the other graphic-focused. More specifically, the first section consists of five succinct and informative essays about the past, present and potential future of urban villages, while the second is dominated by data-graphics, photographs and architectural drawings highlighting different urban villages across five Chinese cities.

Taking up roughly a quarter of the book, the Essays section of the book provides critical background and food-for-thought about the evolution of, and prospects for, these distinctive urban environments. Collectively, they counter popular stigmatized perceptions of these areas by putting forth a strong argument for urban villages as places of value from a variety of angles, from historical and social to economic. Although other books on similar settlements have done so from the sociological and anthropological perspectives, Villages in the City uniquely approaches the subject through an urban design lens—one of the aspects that makes the book particularly noteworthy.

Balancing the broader academic leanings of the essays, the remainder of the book zooms into twelve specific urban villages, each of which ranges in prosperity and differs in their dominant industries—Xiasha, Dafen and Gangxia Villages in Guangzhou, Jiekou and Tianjin Villages in Dongguan, Shipai, Wanshengtang and Sanyuanli Villages in Guangzhou, Bitang and Hedang in Foshan, and finally Poshi and Zuowu Villages in Zhuhai.

As mentioned above, the text of the first section is here replaced by beautiful visuals—3-dimensional drawings, photos, charts and graphs—with illuminating info-graphics and photo essays dividing the sections on individual villages. Over and above hard metrics on each urban village (density, population, etc.), satellite imagery, urban cartography and wonderful drawings of housing flats, short profiles of specific people that live in each neighbourhood offer a personal description of local life within the settlements.

But perhaps the most impressive, atypical and ambitious inclusion are the cross-sections of each village’s main streets.  Inspired by Terasawa Hitomi’s incredible and unrivalled illustrations of Kowloon Walled City in Daizukan Kyuryujyou, these remarkable drawings offer invaluable information on how people inhabit the urban villages. Although one would be hard-pressed to truly match the graphic sensitivity and overall mastery of Hitomi’s originals in size and detail, these contemporary surrogates are certainly enough to satiate the hunger of urban cross-section enthusiasts. One can’t help but imagine the magic that would have happened had the undertaking occurred in collaboration with Atelier Bow-Wow or LTL. One can only dream….

Overall, the relevance and value of Villages in the City: A Guide to South China’s Informal Settlements is unquestionable, despite being published a few years ago. As a study that fills a critical void on urban space and settlement evolution in contemporary China and a feat of graphic dexterity, it continues to be a crucial addition to urban geography scholarship and city visuals.

For more information on Villages in the City: A Guide to South China’s Informal Settlements, visit the University of Hawai’i Press website.