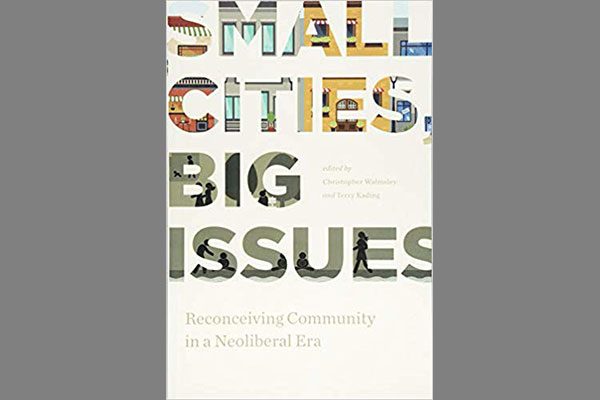 In this collection, we reveal the broader forms of discrimination and social exclusion evident in local attitudes, policies, and actions directed towards individuals who are perceived as threats to mainstream values. We call into question the myth of Canada as a fair and just society, guided by principles of compassion, by exploring the social realities facing small cities in Canada. We aim to understand how citizens, community organizations, and local governments respond to the social challenges of urban life beyond the metropolis. We also uncover some of the distinctive attributes of the small city as it struggles to confront increasingly complex social issues arising from federal and provincial financial restraint and the effects of global economic restructuring.

Ever since the time of Jean-Jacques Rousseau, sociologists have pondered the moral complexity of the city as both a social and physical construct, wondering if it is we who are civilized by the city, or whether it is the opposite – that the city is in fact a corrupting force upon our humanity. Regardless of which side of the argument you may find yourself, Small Cities, Big Issues – a superbly researched product of several faculty from the Sociology department at Thompson Rivers University (TRU) in Kamloops, British Columbia (itself a small city) – here has a little something for everyone.

For it is clear now that the issues of homelessness, prostitution, drug addiction, and mental health, along with discrimination against First Nations, immigrants and the LGBTQ community, all once thought to be the exclusive purview of only large cities, are now quite at home in small cities across our nation, certainly as they are here represented by several case studies set in Nanaimo, Kelowna, Prince George, and Kamloops – the latter being home to many of the book’s contributors.

In Canada, it should really come as no surprise then that these small cities make up the vast majority of our nation’s population, made up as we are of 10 large urban centres, followed by fifty-one smaller communities that fall into the book’s definition of a small city, and as enumerated by the Federation of Canadian Municipalities (FCM). More often than not, it is the unfortunate case that the issue of homelessness has helped to identify these cities through their need for government assistance through various federal and provincial programs available, now fewer and far between.

The fact that both the federal and provincial governments have over the past few decades offloaded much of their responsibilities in regards to these issues onto municipalities in the name of neoliberalism is a recurring theme throughout the book, starting with the shuttering of the sixty year old CMHC’s National Housing Strategy in 1993 by the Conservative government (recently relaunched by the Trudeau government in 2017).

This also provides the subject matter for the book’s opening chapter, ‘Homelessness in Small Cities: The Abdication of Federal Responsibility,’ written by the book’s editors, who point out that it is less expensive to house someone living on the street than it is to pay for the fallout directly associated with their being homeless.

“By the late 1990’s, neither the federal government not the provincial administrations were addressing the housing needs of low-income citizens in any significant way. In 2014, it was estimated that, over the previous two decades, some 100,000 units of affordable housing had not been built owing to the cancellation of programs.”

For homelessness itself, as it turns out, is the pervasive thread that runs through all the other issues dealt with in this book, and with both the federal and provincial governments downloading it to the nation’s municipalities, each city has been on its own to solve this complex problem with limited resources, often resulting in the exacerbation of one problem into several. And for the smaller cities, which have even less resources upon which to draw, it has made matters even worse, as is evident in the case studies presented here.

Perhaps now more than ever, and certainly as it is becoming more and more expensive to live in Canada’s larger cities, one would not be at fault for thinking a small city would be an idyllic alternative – more sophisticated than a rural country town, but away from the hustle and bustle of overcrowded streets and bland subdivisions. Not so according to the case studies presented here, with ‘Regulating Street Sex Work in Kamloops’ and ‘Needles in Nanaimo’ presenting quite the contrary. Another chapter, ‘Being Queer in the Small City,’ speaks for itself, along with ‘Walking in Two Worlds: Aboriginal Peoples in the City.’

In all instances, including another chapter on the deinstitutionalization of 400 mental health patients from the Tranquille Hospital for the Developmentally Disabled near Kamloops in 1983, it is the notion of the ‘other’ that persists – the outsider threatening the way of life of the resident in the small city, an agent of vice bringing all the ills of the big city from which many would seek to shield themselves. Here then is the core message of Small Cities, Big Issues, providing as it does a window into the level of tolerance the average Canadian has the capacity for in their built environments.

In the chapter on prostitution in Kamloops, the creation of red zones in the north of the city, where zero tolerance has been given to sex trade workers, is a clear sign that this capacity has been reached. Similarly, in 2005 Nanaimo city council enacted zoning policy which out-and-out forbade the provision for food banks, soup kitchens, and drug addiction treatment facilities within its city limits – one step forward, two steps back.

But as the book points out, while a small city mentality may be partially to blame, it is also the fault of municipal governments whose neoliberalist policies must ensure return upon their investment within their terms in office, simply doing their jobs of providing for an increase in their tax base so the proceeds can go to much needed social services. Seen another way, it is a case of the snake eating its own tail.

And as has been often the case, where federal and provincial governments have shuttered social programs in order to balance their budgets, municipalities have in many instances made matters worse by criminalizing behaviour deemed to be disruptive in their respective communities. The glimmer of hope is where there is evidence that some communities are offering healing environments for those marginalized in other cities, providing evidence that there still exits compassion and benevolence in the face of neoliberalist policies.

Divided into two parts, the first half of the book – “Displacement, Isolation, and the Other” – focusses on the social consequences of two to three decades of neoliberal restructuring at both levels of federal and provincial government, while the second half of the book – “Building Community” – offers some hope, exploring constructive ways in which small cities might respond to growing social and economic disparities. In the book’s conclusion – “The Way Forward” – the book’s editors sum up their research to evaluate what has worked versus that which has not, whether it is the need to revisit out national notion of multiculturalism or celebrating the success of social planning policies in small cities.

One can only hope the authors of this book are already at work on a second volume, as more and more social issues continue to present themselves on a daily basis. The opioid epidemic, influx of Syrian refugees, and proliferation of Airbnb’s – this latter issue which a recent study has shown is seeing a larger growth in the small city market than anywhere else – all need to be the subject of ongoing study. It would also be beneficial to combine some of their research with that of the architecture profession, as they have boots on the ground when it comes to working with municipal planning departments, whether big or small.

In the end, the issues effecting small cities is not and should not be a hopeless cause – our nation has weathered great adversity over the years and the authors are all coming from a place of optimism, in several cases using their own experiences as case studies here, and we are all richer for having this book to read. It should be required reading for each and every MP and MLA currently in government, and I would expect more volumes on the subject to appear in the future, certainly as a myriad of ongoing issues continue to appear on our urban landscapes.