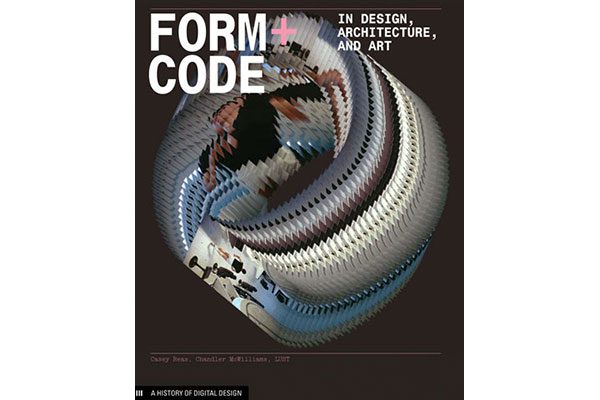 “Elegant as an algorithm, clear as a program, and as enthralling as a video game, Form+Code is a powerful tool, both as a tutorial and in-depth analysis of the aesthetics of the information age.”

– Domenico Quaranta, from the Introduction

In a world where the number of computer programming languages is nearing that of conventional human languages, Form+Code is an important cipher to interpret and comprehend this future, and a source of inspiration for architects and designers to visually render this brave new world. As edited by Casey Reas and Chandler McWilliams—both professors in the Department of Design Media Arts at UCLA—along with the Hague based LUST doing the graphic design, this visually arresting and urgently relevant publication is an attempt to baptize the uninitiated into the world of computer programming, and illuminate its seemingly unlimited potential as a source for the visual arts and architecture.

From the first page one knows they’re not in Kansas anymore, as a literal definition of code (along with examples) is followed on the second page by the definition of an algorithm, with the third page passing at lightning speed to the concept of ‘source code’. But as the book’s introduction says, this is not a textbook to educate non-computer programmers. As such, it does not intend that one fully understands code beyond its incidental aesthetic qualities, seeking only to present the seemingly endless array of possibilities to be mined from the marriage of computer language with art.

The book describes how the work of such conceptual artists as John Cage and Yoko Ono sought to imagine a human-computer language, where their art becomes instructions in how to perform our day-to-day activities, much as a line of C++ or Java can produce a cylinder or sphere. This perhaps represents the extreme, as the book primarily focuses on the visual stimuli capable with this technology, and provides a brief history lesson in how certain key moments in the writing of computer code resulted in one hand the world wide web, and on the other the creation of digital imagery and art.

Form+Code also points out that we have reached a point in history where it is possible for a computer programmer to think in terms of different programming codes the same way a carpenter thinks about working with different species of wood, at the onset of a project. Using LOGO and BASIC as two examples, the authors give us the same instruction to draw a triangle in the two different programming languages: showing how each iteration is a unique object in itself. This then forms the basis of beginning to imagine code as a visual aesthetic and forms the premise upon which the book is based, as a chronological treatise on how code through history has influenced art and architecture.

Looking back at where the connection to code and the arts began, the editors point to the 1940s when war calculations needed to be done a short time. As such, code and art have not always been so complementary. The unprecedented arrival of personal computing devices has since allowed us an ease unthinkable to those first data-crunching computer operators. So much so that most don’t even comprehend that every iPhone, Nano, and Blackberry is, in evolutionary terms, as far removed from those first dits and dats of morse code, than we are from a lungfish. And all this technology, of course, runs on code, whether binary or otherwise.

Perhaps the most important distinction made in the book is the two different ways in which codes and computers have influenced art, through production and conception. Not wholly unrelated, these two uses of the computer as a tool are beneficial to the field of architecture, as sophisticated programs like Revit and 3DMax use the most cutting edge computer language to express the architect’s vision. Similarly, CAD and other programs are used to produce fabrication drawings that greatly help in the physical construction of the building. Code even affects the project’s delivery, right down to the critical path method for calculating the schedule of the job, which is also a type of code.

While the book is rich visually, its content is equally as important, as its straightforward explanations of CNC and SLS milling technologies are alone worth the price of admission. The book starts with two expository-like chapters—What is Code? and Form and Computers. This is followed by the real meat of the book, both visually and conceptually, consisting of five chapters representing the ways form and code play upon each other. Repetition, the first of these is a no-brainer, as is obvious in the repetition of columns in a colonnade, or the repeated images in an Andy Warhol painting. These are easily compared to a series of ones and zeros in a computer code or the beads on an ancient mathematician’s abacus.

The next chapter, Transform, requires a little more stretch of the imagination. As made evident by the computer imagery used in the book—whether to sculpt an object in a space that doesn’t exist, or use digital photography to create a fiction in the real world—the computer and its many languages have been utilized almost from the start for transforming our visual field. As an introduction to the notion, the painting Three Flags by Jasper Johns is provided as a pre-computer example, as well as graffiti, which is also a kind of code which occurs in the social realm.

Featuring works of architects exploiting computers and form in all their permutations, such as Morphosis, SHoP, Zaha Hadid, and OMA, the book also includes the work of Philip Beesley, whose beautifully haunting ‘Hylozoic Ground’ forms represented Canada at the 2010 Venice Biennale.

Looking back through history, there have been several instances where the annotation of some other art has informed the ‘form’ of architecture—perhaps one of the most famous examples being the mathematician composer Iannis Xenakis and his collaborations with Le Corbusier. If one looks closely at the great architect’s La Tourette monastery, one can see Xenakis’ stochastic music written in the fenestration patterns of the building’s elevations. And of course now with the technological advances in both music and architecture, one can only imagine what these two could’ve accomplished today.

Bruce Mau’s Massive Change in 2005 was also in the spirit of Form+Code, though it was more a commentary on the collisions of populations, economics, and technology—while the book is mostly concerned with the technology. Still, Mau’s show was one of the first to observe the aesthetics of our brave new world, laptops and all, and how some of the incidental representations of this new virtual world took on aesthetic qualities all of their own—as illustrated in his wall-sized graphic of yearly flight paths in and around continental North America.

With this in mind, Form+Code is an updated publication on how computer languages, via their iterations and instances, continue to impact themselves on our visual world, affecting the forms we see and the objects we touch, and how with each passing year there are several new computer languages with which to render our invisible universe. The book is then the hare beckoning us down the rabbit hole, into a world where anything is possible.