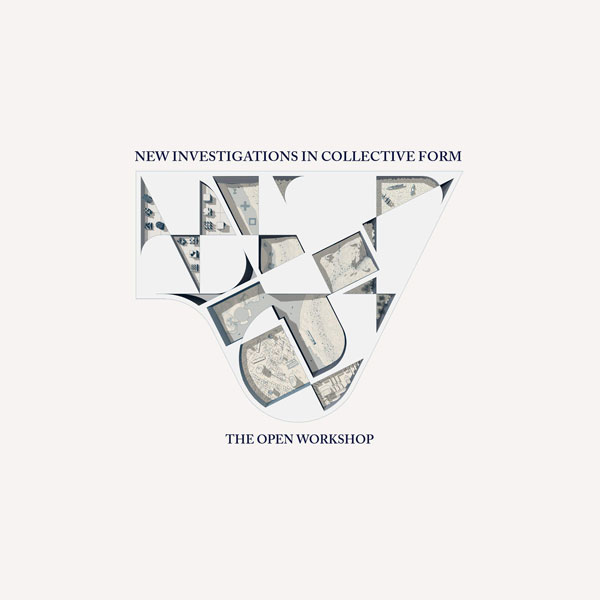 More than fifty years have passed since the publication of Fumihiko Maki’s seminal text, Investigations in Collective Form, which argued for collective form as an organizing device to address the increasingly fragmented city and public realm. Today, we continue to face urban challenges – from economic inequality to a progressively fragile natural environment – that, in order to be addressed, require us to come together in a moment when what we collectively value and identify with is increasingly difficult to locate. The group of design experiments that make up this book test how architecture can empower the diverse voices that make up the public realm and the environments in which they exist.

In New Investigation in Collective Form from the Toronto/San Francisco-based office The Open Workshop—led by Neeraj Bhatia and his atelier of urbanist philosophers—we are presented with a series of thought-provoking urban projects alongside a series of essays penned by some of the brightest minds from Harvard, Yale, Rice, and London’s Architectural Association. Part monograph of a 2018 exhibition of the same name held in San Francisco, the book is a call to arms to use architecture and urban design to solve our planet’s biggest problems, most notably climate change and urban inequality.

Opening with a foreword from Pier Vittorio Aureli, author and professor at the Architectural Association in London, he posits that the pursuit of architecture and form-making is inevitably a political act, and therefore the ideal instrument with which to correct society’s ills. The projects in the book, as he sees them, represent examples where architecture has helped to bridge a gap between social and political inequities—as seen in the provocative housing solutions from Europe featured within—as well as critically engaged post-colonial paradigms, presented in the book’s inclusion of Inuit and Metis projects.

As pointed out by Aureli, these projects have manifested themselves through several modern notions defined by Fumihiko Maki in his Investigations in Collective Forms (1964) – and from which the book gets its title. These notions as they have evolved in the Open Workshop loosely form the structure for the book—Living Archives, Rewiring States, Commoning, Articulated Surfaces, and Frameworks—all themes that have their roots in Maki’s original text, with Bhatia providing a new interpretation in light of the rapidly changing state of our cities and societies.

The Introduction, penned by Charles Waldheim, professor at the Harvard Graduate School of Design, provides the context for Bhatia’s practice, which is based out of both Toronto and San Francisco. Starting with an infographic The Open Workshop studio produced following the 2016 US presidential race, Waldheim points out how it became a flashpoint for discussing the relationship between population densities and voting behaviors. It was also around this time that the Yerba Buena Center for the Arts contacted Bhatia to do the exhibition featured in the book, as part of a series of exhibitions the San Francisco gallery was putting on at the time called the City Initiative Program.

It is also in this essay that the notion of Umberto Eco’s seminal Open Work (1989) is evoked, and the namesake for  The Open Workshop itself. As Waldheim points out, while Eco didn’t explicitly call out the connection between architecture and the open work in his discourse, a correlation is most certainly implied. As he sees it, “his semiotic analysis of openness in the arts has been widely appropriated for use in the field,” as seen at that time through Charles Jencks and George Baird’s adoption of it in their treatise Meaning in Architecture (1971). After the latter, European semiotic theory became increasingly prevalent, for better or worse, in the postmodernism and deconstructionist discussions that followed.

Following Waldheim’s essay is the book’s central thesis, written by The Open Workshop founder Neeraj Bhatia. He cites the reason for having Maki’s text as his point of departure, and how fifty-four years later his central thesis is still just as relevant as we are “in a moment of increasing isolationism, a simultaneous obsession and depression with technology and a crisis in creating collectivity characterized most terrifyingly with our inability to address issues such as climate change.”

The chapter is also an exposition on the very philosophy itself of The Open Workshop, as New Investigations in Collective Form provides us in its projects and essays with a glimpse of what Bhatia calls the “conduit infrastructures”—those devices which allow such things as trade and economics to operate at the global level. Such then is the importance that we espouse common collective values on an urban scale, to ensure openness and fairness for all societies everywhere on the planet. As Bhatia notes, “how and where to locate our collective values is at the core of reconciling what it means to live in a pluralistic society.”

Bhatia also cites Hannah Arendt’s ‘equality-distinction’ notion described in her well-known book The Human Condition, where two seemingly contradictory human predilections can co-exist. Bhatia believes this needs to be a fundamental aspect for a pluralistic society to flourish, noting how large urban projects of the past—from CIAM to Archigram—have failed to have a meaningful impact within the wider socio-political landscape for the reason that the landscape is ever-changing: “from the city, to the periphery, to the hinterland – it provokes the ultimate question of what are our common values and how can they be supported by collective form?”

It is in this realm that The Open Workshop operates, at the nexus between the collective and the individual, determined and indeterminate, the formal and informal. The importance of their firm’s work is to add to the richness of the conversation that Maki began fifty plus years ago, as the need for flexibility in the modern architectural project has created an identity crisis: “New Investigations builds upon Maki’s inquiry to offer a richer role to design as the choreographer on how dynamic and evolving systems interact with fixed and stable points.”

As the pivotal essay in the book, Bhatia, like Waldheim in his introduction, expounds upon the relationship between Eco’s notion of the Open Work and architecture, especially in the guise of urbanism in the modern city. He rounds out the chapter explaining the exhibition itself, which—along with several seven-meter long infographics on the exhibition walls—consisted of a number of building models from the firm’s current practice, suspended on a tensile system in the gallery space that Bhatia says represents Arendt’s conception of power.

For the remainder of the book, Bhatia has assembled several notable commentators of our time to each write an essay on one of the themes Bhatia has expanded from Maki’s original notions. These essays—contributed by Jenny Odell (‘Conditioning Possibility’), Clare Lyster (‘Only a Matter of Time’), Rafi Segal (‘An Urbanism of Commoning’), Keith Krumweide (‘Getting Connected’),  Albert Pope (‘Infrastructure, Identity, and Time’)—are each supported by a small group of architectural projects, each of which expands upon the core material provided by Maki, Arendt, and Eco.

Providing the book’s Afterword, New York architect and Yale professor Peggy Deamer explains how the work of The Open Workshop is meant to be slightly upsetting and off-putting, teasing out as it does the environmental irresponsibility and social incoherence complicit in the modern architectural enterprise. As she sees it, architecture is “an existential connection between things human and non-human, big and small, in and out of our control.” The book is then part-cipher to navigate what has become increasingly un-navigable, and part monograph/manifesto for The Open Workshop project itself.

The resulting book is a beautifully executed object, providing an exceptional balance of text, project work and graphic design that would make Vignelli proud. In its small square format with satisfying proportions, the book sports an embossed cover with thick paper stock that makes the 192 pages seem much denser and making the result greater than the sum of its parts.

Comprised of rich visuals combining project and exhibition photos, the diagrams and infographics that Bhatia’s office is currently producing provides for several of the book’s eye-popping moments. An inspiring and thought-provoking product of The Open Workshop and Actar Publishing with CCA Architecture Books —New Investigations in Collective Form is the perfect companion to Maki’s original text, and a guidebook for fledgling architecture firm’s looking where best to practice in our current political and social landscape.

For more information on New Investigations in Collective Form, visit the Actar website.