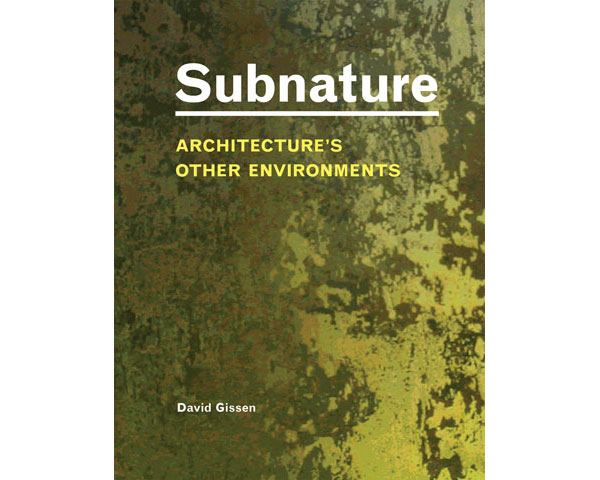 Nature is ever present in our daily lives, Yet when we think and speak of “nature” it is often in reference to its most attractive aspects – sun, trees wind, and the like.  This is particularly true in the architecture and urban design professions within which most thought is put into maximizing these “positive” attributes of nature. Its most clear expression is seen the standard renderings that depict buildings and streetscapes bathed in sunlight with puffy cumulus clouds decorating the perfect baby blue sky.

But what of the “negative” aspects of nature. Those consciously forgotten elements such as smoke, dust, weeds, debris and mud – idyllic nature’s alter-ego – that are equally present in shaping the modern city but remain undiscussed. It is this important topic to which David Gissen turns his eye in the book Subnature: Architecture’s Other Environments.

Created from secondary information gathered by over the course of his PhD dissertation on nature and architecture, Gissen defines “subnature” as ” forms of nature…that are envisioned as threatening to inhabitants or to the material formations and ideas that constitute architecture…those deemed primitive…filthy…fearsome…or uncontrollable.” Within this context, Glissen breaks the silence about these alternative forms of nature and explores the social and architectural issues surrounding the subnatural. A thoroughly engaging read, the book is broken into three broad parts – Atmosphere, Matter, and Life – within which short essays describe related subnatural elements.

More specifically, Atmosphere speaks to Dankness, Smoke, Gas and Exhaust. Matter, on the other hand, focuses on Dust Puddles Mud and Debris, while the final Part – Life – looks at Weeds, Insects, , Pigeons and Crowds. The book ends with a concise Epilogue that straightforwardly addresses the authors intentions behind describing the subnatural and architectures role in addressing the issue.

Each succinct essay follows a similar chronological format – starting with a historical look at the subject in question and leading to contemporary architectural proposals and projects that identify the subnatural element discussed and integrates it into their design in some way – ranging from more passive art installations that to architecture that uses the elements to develop their forms. Images and dwgs supplement the written content. Each part ends with a great bibliography of references.

The simple format and descriptive writing ultimately gives readers an excellent introduction to the difficult subject of these “uncontrollable, filthy and fearsome” elements. Although it is more a scholarly text than a layperson-targeted read, it maintains a pretty good balance between being academic and widely accessible.

In terms of content, Subnature does a great job of demonstrating that our perception and appreciation our environment is as much a social construct as it is a part of ecological processes.  In doing so, it brings to light a number of interesting issues – from our culture’s differentiation between weed and non-weed species simply being a matter of socially determined undesirability, to how social and political relationships have been strongly associated with insect metaphors. In each case, Gissen underlines the deeper understanding of nature that arises when architecture meaningfully engages these issues.

Gissen clearly acknowledges that fully embracing subnatural elements within all facets of popular society demands a strong assessment of the benefits and dangers of doing so. As such, he admits that ethics play an important role in evaluating the how far these ideas are taken. Furthermore, he explicitly states that addressing the subnatural is not about making a “more pleasant and peaceful” architecture. Instead, the significance Subnature and its subject lies in initiating a more inclusive and meaningful discussion of nature and architecture’s mediating role. As such, it is definitely worthwhile read for architects and urbanists looking to engage an alternative view of the natural and man-made world around us, or as Glissen says “…the natures we produce through our most radical architectural concepts.”

For more information on the book, visit the Princeton Architectural Press website.

Erick Villagomez is one of the founding editors at Spacing Vancouver. He is also an educator, independent researcher and designer with personal and professional interests in the urban landscapes. His private practice – Metis Design|Build – is an innovative practice dedicated to a collaborative and ecologically responsible approach to the design and construction of places. You can also see some of his drawing and digital painting adventures at Visual Thoughts.