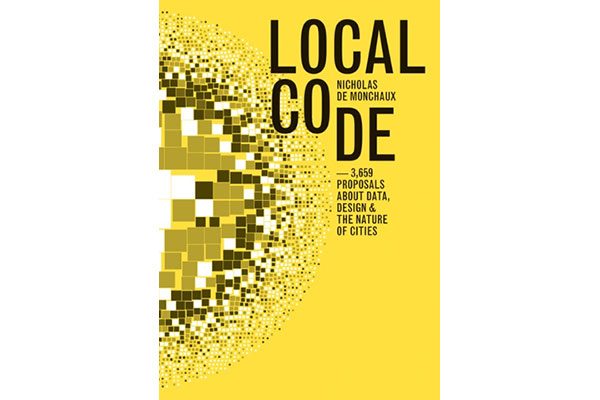 Sometimes, you don’t know where you are going until you get there. And perhaps no better statement can be used to describe Nicholas de Monchaux’s Local Code: 3659 Proposals About Data, Design, and the Nature of Cities. An Associate Professor of Architecture and Urban Design at the University of California, Berkeley, de Monchaux is perhaps most recognized as the author of the award-winning Spacesuit: Fashioning Apollo (MIT Press, 2011): a book that ties together an diversity of interdisciplinary strands in telling the story of the development of the spacesuit and its relevance to design and urban planning.

Insofar that Spacesuit speaks to the complexity of the human-made environment, and the importance of adaptation and redundancy, Local Code can be considered a continuation of his earlier work, albeit one that speaks more directly to architecture and the urban environment. This most recent book, however, brings issues around data, resistance and resilience into the discussion.

Whereas the content of Spacesuit is structured logically across its twenty-one chapters, Local Code is an provocative and abstract meandering journey. Its structure is deceptively straightforward, however, with four design “Case Studies” for San Francisco, Los Angeles, Venice and New York (that make up the 3659 proposals), respectively, sandwiched between three interconnected essays. Each of which the latter focuses on the provocative, obscure histories of specific characters de Monchaux considers particularly relevant to the understanding the interaction of “data, design and the nature of cities”—Gordon Matta-Clark (Fake Estates and Reality Properties), Jane Jacobs (Life Attracts Life) and Howard Fisher (The Map and the Territory). These are bookended by a brief Introduction and Conclusion.

Although the design proposals loom large in the title of the book, each Case Study chapter includes a very brief introductory write-up describing the intent of the works, a key image with the graphic coding for the designs, then the proposal themselves: the vast majority of which are almost illegible 2-dimensional thumbnail plan drawings. A smaller selection are enlarged enough to make out some details and even fewer still given spatial treatment, most often in the form 3-dimensional pixellated perspective or paraline drawings.

It is clear then that the design themselves are of little consequence, in and of themselves. In fact, their importance and meaning only become evident in relation to the interrelated, alternating threads about Gordon Matta-Clark’s “remaking of nature of the city as a complex”, Jane Jacobs’ work on understanding the city as a “living network-of-networks” and Howard Fisher’s “visual use of information in the public good”.

So, for example, the San Francisco design proposals that identify and transform the hundreds of abandoned urban sites across the city, are an extension of the unfinished project of Gordon Matta-Clark, described immediately after in Fake Estates and Reality Properties. The re-use of abandoned sites is, in fact, the foundation for all the case studies: the reason the Matta-Clark essay is the first of the three.

In light of the fact the each essay adds a different layer of meaning to the designs proposed, one only truly appreciates the power and intent of the Local Code upon reading its last word: the structure and format of the book perfectly mirroring the unpredictable, complex nature of the cities described within its pages.

As a rare book that readers must actively engage as they read, Local Code: 3659 Proposals About Data, Design, and the Nature of Cities is a thoroughly thought-provoking and captivating read—one that eloquently highlights a path through the intimidating, dark forest where urbanism and Big Data intermingle. Perhaps more impressive is that, over and above the latter, it remains directly connected to the urban fabric as physical places human adaptation, resourcefulness and resilience.

For more information on Local Code: 3659 Proposals about Data, Design, and the Nature of Cities, visit the Princeton Architectural Press website here and here . One can also learn more about Nicholas de Monchaux and his work from his personal website.