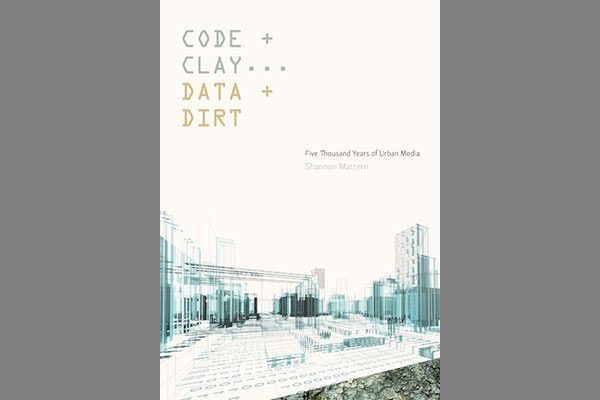 There is little doubt that the influx of digital technologies is altering our understanding of cities. Sensors and networks of all types are gathering and compiling rich information, bringing to light patterns formerly unknown patterns about the intricate workings of the contemporary metropolis. We frequently hear that “the Smart City is in the horizon,” but rarely do people thinking about the implication underlying this statement: that cities did were not smart before the digital revolution.

It is no surprise, however, that Shannon Mattern—Professor of Anthropology at The New School who writes so poignantly about media, architecture and urbanism, and who I consider one of the most interesting contemporary writers on the built environment—would be one of the most elegant voices to tackle the issue head-on, in Code and Clay, Data and Dirt: Five Thousand Years of Urban Media. For those who have yet to read anything by Mattern, her wonderful ability to describe complex issue succinctly and lucidly is captured in her description of one of the books main arguments:

As we head into a future offering ever more potential for mediated control of the urban landscape, and, at the same time, a pervasive sense of our loss of control over the proliferation and sometimes uncritical application of networked technologies and data-driven methodologies, we would do well to enlighten ourselves about what kind of “smartness” or “sentience” we want our cities to embody and to encourage in its leaders and inhabitants. And doing so, I argue, requires that we also recognize that today’s smart cities don’t have a monopoly on urban intelligence. In fact, we can trace that “smart” genome all the way back to ancient Rome, Uruk, and Catalhoyuk.

To Mattern, cities have served as media over the course of time, with media materializing through urban processes and practices. Code and Clay, Data and Dirt is structured on this premise. Following a strong introduction that theoretically grounds the content within a call for an “urban media archeology,” the book is divided into four chapters, each dedicated to describing how different historical media have altered urban space at the time of their inception, how they continue to influence the urban landscape and how they will continue to do so in the future.

The first chapter—Waves and Wires: Cities of Electric Sound—begins with a focus on the impact of radio on the urban environment, seamlessly weaving in the effects that the earlier telegraph and telephone technologies had on built space. This naturally leads to discussing the evolution of communication technologies from the latter to fiber optics and cellular wireless systems, and their effects on cities across scales. As such, the narrative weaves together a variety of interesting topics from “acoustic zoning” and the effects of radio in architectural interiors to the centralization and dispersion of urban form generated by different telecommunication systems.

This is followed by Steel and Ink: The Printed City, a chapter highlighting the influence of print on the design, construction, and navigation of the built environment. Mattern takes full advantage of this fertile terrain, discussing everything from the rise and impacts of architectural treatises on the settlements to the pervasive posters wrapping poles in cities around the world. Along the way, she touches upon the creation of architecture dedicated to housing printed materials, how guidebooks have shaped the urban experience and 3D printing architecture.

Chapter three—Of Mud, Media and the Metropolis: Aggregating Histories of Writing and Urbanization—elaborates on how mud (clay, stone, brick, etc.) has supported settlements in all ways since the earliest cities and offered forms of symbolic communication. This includes highlighting the importance of ‘mud’ as the earliest writing surfaces used to store and communicate information about the city and its people. In no uncertain terms, it was central to everything from trade and governance to cultural development. That these same materials were used in the construction of buildings opened the door for Mattern to examine how the built environment—such as facades and city walls—served as a substrate for writing texts. This critical connection between script and architecture is then expanded on to include the effects of writing and drawing (both being forms of inscription) on urban planning. An interesting foray into the impacts of the standardization of construction material—bricks and concrete, specifically—as well as wall writing (i.e. graffiti, etc.) closes the chapter.

Speaking Stones: Voicing the City—the last of the main chapters—is the book’s most unique, looking at architecture and the city as a sounding medium—a vehicle for the transmission of the voice and other acoustics. In order to do so, Mattern introduces archeoacoustic research and delves into spaces for public address. She also touches on different cultural examples of sonic architecture and urban forms over time, including the Greek Agora and mosque-focused Arab cities.

A brief conclusion closes Code and Clay, Data and Dirt, emphasizing the city as a complex and multi-sensory entity. Within this in mind, she asserts that built form, technologies, social practices, economies and so on are deeply ‘entangled’—a theme that she eloquently introduced earlier in her wonderfully compact, 50-page Deep Mapping the Media City (2015).

From the moment Mattern’s work came across my desk a number years ago, I was drawn not only to her unique take on the urban landscape, but also her brilliant ability to communicate complex ideas in an engaging, accessible way. I have been following her writing ever since and am clearly not the only admirer, as her increasing contributions to various publications (such as Places Journal) attest to.

Within this context, I was really looking forward to reading Code and Clay, Data and Dirt: Five Thousand Years of Urban Media, and on all accounts, it did not disappoint. Its fresh take on urbanism—that stitches together media studies, archeology, and the urban environment—was a wonderfully thought-provoking, off-the-beaten-path journey into the messy complexity of people, technologies and the material world. Like all of the strongest books in my library, it opened new ways of conceptualizing the city, pointed the direction for different areas of exploration, and quite simply, left me wanting more.

To learn more about Code and Clay, Data and Dirt: Five Thousand Years of Urban Media visit the University of Minnesota Press website. You can also read a number of Shannon Mattern’s wonderful articles for Places Journal—including one of favourites The City Is Not A Computer—here.