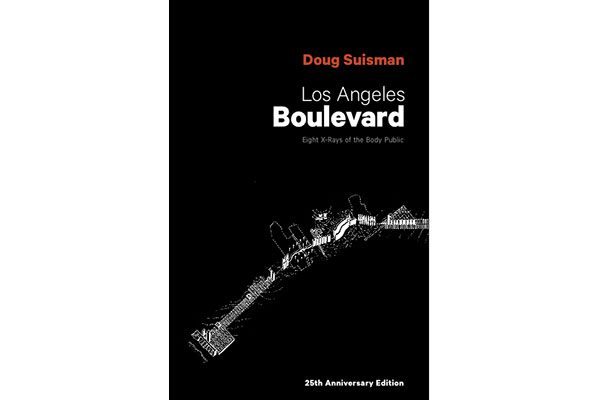 As an urban design instructor, practitioner and bibliophile, it is a rare pleasure to discover lesser known, critical and insightful books on urban structure. More so on Los Angeles, a city well endowed with iconic texts—from Reyner Banham’s Los Angeles: The Architecture of Four Ecologies to Mike Davis’ City of Quartz: Excavating the Future in Los Angeles. This being the case, one can only imagine my delight when I stumbled upon Doug Suisman’s Los Angeles Boulevard: Eight X-Rays of the Body Public.

Originally published in 1989 as a ‘pamphlet’—interestingly, just a year prior to City of Quartz—this most recent 2014 edition was produced in celebration of its 25-year-anniversary. As one would expect, the original introduction and eight “x-rays”—chapters—are included. Additionally, however, it comes in a new beautifully-designed hardcover frame with refreshed graphics, opening with an excellent new foreword by L.A. Times architecture critic Christopher Hawthorne, who describes the significance of the work in the wake of his incredible year-long series Reading LA. Most significantly, an entire new section—Twenty Five Years Later: Boulevards in Practice—is included: effectively doubling the size of the original pamphlet to a charmingly compact 144 pages, and covering 10 interesting projects done by Suisman’s firm, after the initial publication.

The eight “x-rays” themselves—idiosyncratically named, peppered with beautiful diagrams and maps, and roughly ten pages each—are concise, intelligent, analytical pieces that ultimately argue against treating boulevards of Los Angeles as mere embodiments of technical specifications and economic considerations. Instead, to use the eloquent words of Christopher Hawthorne, they are  “a great reservoir of public space waiting to be redefined and activated.” Such sentiments fall on deaf ears even today—a fact that makes the book all the more relevant now—so one can imagine that, in the late 80s, Suisman was talking to a brick wall.

This being the case, he had to be strategic about how he constructed his narrative, wisely choosing to delve into the rich history, evolution and significance of the boulevards of Los Angeles over time. This journey begins with the Suture x-ray, that describes how the broad structure of the boulevards are a consequence of historical circumstances and boundaries of early settlement patterns, such as the original pueblos and common lands. This is followed by two chapters—Umbilical and Spine—outlining the interesting histories of Sunset and Wilshire Boulevards, respectively.

Girdle and Phosphor dig into effects of early Hollywood and film culture on the city and boulevards. The first focuses on the complex relationship between early introverted movie studios and the major boulevards, while the second drills into their extroverted counter parts—movie theatres—and the resulting transformation of these corridors between day and night.

Things switch gears, literally and figuratively, in Torrent where Suisman focuses on the transformation of the physical structure of the boulevard in response to changes in transportation technologies, from footpath to streetcar to automobile. Building from this, Pathogen, looks at new forms of communication in light of the higher speeds of travel. Speaking to signs and symbols in space, Suisman goes beyond focusing on the increase in size and quantity of advertisements in the typical sense, to speak to the evolution of building types towards acting like billboards in the landscape.

The last of the x-rays, Fuselage, offers the punchline. In keeping with the title of the chapter, it compares the boulevard to the fuselage of an airplane: an element that requires coordination with its surrounding elements in order to work properly. As such, Suisman highlights the importance of boulevards as transitional spaces of arrival and entry for people coming from surrounding areas. In light of this, he calls for an integrated approach to their treatment, moving beyond considerations of its surface rights-of-way to include “all underground development, rear and side elevations, alleys, parking areas, and adjacent neighbourhoods”. A wonderful set of annotated diagrams explicitly outlining boulevard design considerations marks the end of the original pamphlet.

This transitions well into the newly added Twenty Five Years Later: Boulevards in Practice—consisting of 10 chapters outlining 10 projects from around the world, done between 1991 and 2012, that demonstrate how Suisman’s initial research informed his practice. The projects include completed and unbuilt works, and counter to what one may expect, not all proposal focus the design of singular boulevards. Instead, they focus how of a “boulevard frame of mind” was used towards different urban design problems. This makes them all the more instructive, as the selected works show how the ‘x-ray’ method used in Los Angeles Boulevards—one that biased a ‘close reading’ and first hand experience of place—is universally applicable to a diversity of urban design issues.

This being the case, the power of this newly packaged, expanded Los Angeles Boulevards lies in its ability to emphasize that, beyond simply being a critical book on a singular aspect of LA’s urban environment, it offers a valuable way of thinking about and approaching urban design problems, more generally. To my mind, this rightfully places Suisman’s contributions beside the various great minds, such as Banham and Davis, that have dissected Los Angeles towards speaking to broadly relevant issues. I don’t hesitate to say, then, that Los Angeles Boulevards is a must-read for architects, planners, designers and urbanists who not only care about improving the urban landscape, but also want to get a glimpse into how a forcefully analytical mind attacks the problem of the city.

For more information on the Los Angeles Boulevard: Eight X-Rays of the Body Public, visit the ORO Editions website.