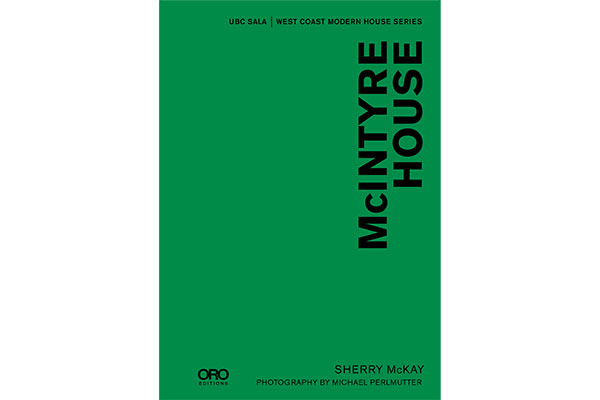 I miss that people once built houses like McIntyre House, homes that so elegantly address the time and place they live in, and which cost no more to build than ugly houses. Why are there no more than a few of these houses in existence? I suppose that is the magic of the place, that it was built in the first place, and that it has survived, and that it shows us there was once a different, and yes, better way to live life in Vancouver.

With this five year, eight-book series started by SALA and ORO Editions coming to a close with McIntyre House, this final book is an exceptionally high note on which to conclude, including as it does text by UBC architecture professor Sherry McKay—one of the series founding editors along with Leslie Van Duzer and Christopher Macdonald—along with a playful preface by the author and artist Douglas Coupland, himself a long-time resident of North Vancouver, having grown up near the book’s subject house.

Also here again with the book’s editors are photographer Michael Perlmutter along with book designer Pablo Mandel, both of whom have grounded the series in their own astute aesthetic. The former providing the pictorial narrative to tell the story of each house, the latter providing the medium for each storyteller’s vision, including the brilliant palette of each book’s cover of vivid reds, oranges, yellows, and greens. And last but not least, each book has had the benefit of Lorinc Vass’ minimalist line drawings to accompany Michael’s photos.

For the final subject house in the series, the editors have chosen a wonder of North Vancouver planning, a brief moment where zoning bylaws were relaxed in the late 1960’s to allow a unique urban design and architecture to emerge. As Coupland describes it, turning off another otherwise ordinary North Vancouver street one entered a kind of heaven, where hundred-foot tall cedars predominated the seven houses below, with no street curbs or front lawns. Compliment of Google satellite imagery, this neighbourhood, known as Cartelier Place, appears as a small but thick copse of trees in which one can barely see the rooftops of the block’s houses.

Developed by local entrepreneur and developer Lois Milsom, along with the design-build firm of Robert Hassell and Barry Griblin, the latter designed five of the seven lots in this tight 2 ½ acres, which also includes two streams. Each house is a simple expression of wood, both on their interior and exterior, and as design-build constructions were modular enough to allow each lot’s house to find its own unique and particular built expression. With the McIntyre House now designated as the most representative of the entire street, its inclusion in the SALA series, along with the support of local architects like James KM Cheng, will help to provide for its ‘protection from the predatory real estate climate of Greater Vancouver.’

As architecture, the McIntyre House is the result of a delightful serendipity, where the local real estate, planning and design tumblers all clicked into place, resulting in a kind of miniature Sea Ranch community on the lower North Shore mountains. Both architects went on to design similar houses elsewhere in the Lower Mainland, and the book has the added benefit of materials provided by Barry Griblin, including original photos and notes from his practice. Still owned by the McIntyres, the house’s legacy is protected, for the time being at least.

For as Leslie Van Duzer points out in her opening editor’s note, one of the houses in the series was saved by the wrecking ball after a Globe & Mail piece by Kerry Gold prompted its purchase by buyers who wanted to preserve it, much as some of the other houses in the series are in the hands of their protective owners—Downs II, Smith II, McIntyre, with Merrick House still owned by its architect. Only one house, Shumiatcher, has succumbed to the wrecking ball. But as the series reminds us, we can’t be complacent as houses like Binning House remain in peril to a global real estate market oblivious to the value of these architectural gems.

Sadly, with the current pandemic, the book editors have had to postpone McInytre House’s launch at Inform Interiors, for whom Nancy and Nils Bendtsen have graciously opened their doors over the five years—often to standing room only affairs—to hear the authors of these books speak about their owners and architects, including discussion on Arthur Erickson (Smith II) and Ron Thom (Copp).

Spacing has had the privilege of reviewing each of the eight books in the UBC SALA West Coast Modern Series, so a special shout out to Leslie and Sherry for giving us the opportunity to provide feedback on this great series. And while it is sad to see it come to a close, there is renewed optimism that through these books, there has been a new awareness sparked by both the general public and within architectural circles, to preserve the material legacy and collective memory of these eight houses, along with those others that are sure to become the subject of a new, future series.

For more information on McIntyre House, go to the ORO Editions website.