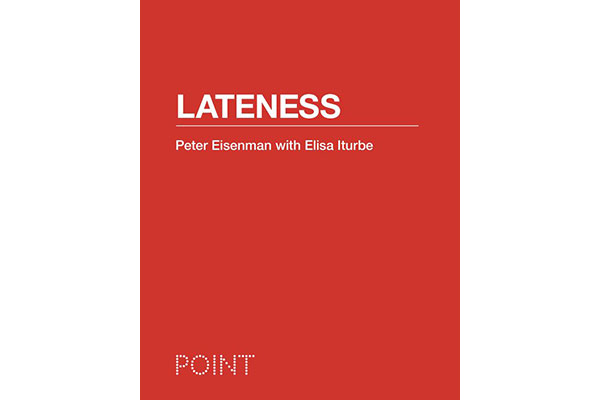 In this incisive book, internationally renowned architect Peter Eisenman, with Elisa Iturbe, proposes a different perspective on form and time in architecture, one that circumvents the temporal constraints on style that require it to be “of the times”—lateness. He focuses on three twentieth-century architects who exhibited the qualities of lateness in their designs: Adolf Loos, Aldo Rossi, and John Hejduk. Drawing on the critical theory of Theodor Adorno and his study of Beethoven’s final works, Eisenman shows how the architecture of these canonical figures was temporally out of sync with conventions and expectations, and how lateness can serve as a form of release from the restraints of the moment.

Often in history, times of crisis are followed by new opportunities to rethink the same old same old, something that has occurred with architecture several times over the course of human civilization. Focusing on the 20th and 21st century dialectic, Peter Eisenman and Elisa Iturbe present in Lateness a new armature for critiquing modern architecture, borrowing the term from the work of German philosopher and critical theorist Theodor Adorno.

Considered one of the New York Five and currently the Charles Gwathmey Professor in Practice at the Yale School of Architecture, Peter Eisenman has a long tradition of writing dense architectural treatises, starting with those he wrote with his mentor Colin Rowe in the 1970s. He sees lateness as the point of departure for discussing how well architectural progress has fared in the digital age. In a long tradition of theoretical texts that includes Robert Venturi’s Complexity and Contradiction in Architecture and Sigfried Giedion’s Space, Time, and Architecture (both of which he acknowledges here), Eisenman offers Lateness as a way to comprehend history through our new digital spectacles.

And no small feat it is.

He starts with Walter Benjamin’s writing on the Angelus Novus, or angel of history witnessing progress, and how architecture has fared in the wreckage. In order to understand this, the book frames ‘lateness’ through a configuration of convention and contingency, two powerful forces in the shaping of any discussion of architecture. After a brief introduction – the book is lean at 106 pages – the authors then introduce several projects by three very different architects, each anomalies in their own right: Adolf Loos, Aldo Rossi, and John Hejduk.

For Loos, we are given a better understanding of the nineteenth-century Austrian architect through careful studies of his Villa Karma and Villa Müller, noting that he was ahead of his time—proto-modern in his views on ornament and clean simple forms. Similarly, the examination of Aldo Rossi’s work proves to be equally late as an Italian post-modernist, with the book’s authors choosing two very different works, his Gallartese Housing scheme alongside his San Cataldo Cemetery.

The book’s final architect features Eisenman’s former colleague and friend John Hejduk, who passed away in 2000. With their friendly rivalry going back to the 1977 interview Eisenman gave Hejduk, both authors’ treatment of their subject is one of canonical reverence, and as such, they have selected some of his best-known work—the Texas and Wall Houses.

In the end, the book’s authors note their value in a new lens, given that each is not dependent on history as a linear narrative. Essentially, they note the inconsistency in taking a linear approach—one of the main points noted in Robert Venturi’s Complexity and Contradiction. By being able to judge an architect and their work ‘in and apart’ of their context and time, several threads can connect styles of architecture before thought to be incommensurate. “The result is something nondialectical, not of the zeitgeist, and not of the avant-garde. Late works are neither of the present nor of the past.”

As opposed to the avant-garde architects of the early 20th century—most famously, Le Corbusier and Mies Van der Rohe, whom the authors of Lateness reference throughout their analysis of Loos, Rossi, and Hejduk—the book espouses in our new age of digital design that the long-held viewpoint of architectural history as linear has been seriously challenged by such work as the three architects in the book, and could very well include many others like Antoni Gaudi and Charles Rennie Mackintosh.

In all cases, the book’s authors have here observed something distinct to set the work of anomalous architects apart from their contemporaries, i.e. the lateness which Eisenman compares to Adorno’s treatment of Beethoven’s later work, which music historians have noted to be a dramatic departure from the classical music canon. Similarly, the architects presented in this book cannot be placed neatly into either modern or post-modern camps (as one could also say about Eisenman himself). By applying this new term to describe not just anomalies in architecture, but artistic creation in general, the authors hope to reexamine the recent history of architecture theory.

With reference to Walter Benjamin, Laurie Anderson, and Eisenman’s seminal Wexner Center – all in the book’s opening paragraph – the reader will not be disappointed by this challenging yet succinct essay, mining as it does the depths of architectural theory, and an obvious choice for inclusion in this series by Princeton University Press editor Sarah Whiting:

In a time when our neo-modern zeitgeist has resulted in increased isolation through the guise of individualism, Eisenman and Iturbe here offer up an alternative perspective—something outside our fixation with conventions and universality, probing the possibility of a world view that is free of the shackles of form and time. Lateness will be of value to both students using parametric tools, alongside their professors who continue to teach Venturi and Giedion’s critical discourses, with the book’s authors providing food for thought in our digital age, as well as being an update to Benjamin’s famous angel of history.

For more information on Lateness, go to the Princeton University Press website.