This new, regular feature will offer up an idea for how to improve Toronto’s public spaces. Some of the concepts discussed will have implementation examples from elsewhere in the world, and others will be as yet untested. Each post will conclude with a question to lead off what we hope will be a lively discussion in the comments section about the idea.

Bike lanes continue to be a controversial topic in Toronto. Mayoral candidate Rocco Rossi has vowed to relegate bike lanes to side streets and back alleys, while fellow candidate George Smitherman is blowing the whistle on the issue and calling for a “time out” on Toronto’s bike lane plans. Jarvis Street has become the proxy war zone for the city’s bike lane battle, where car lovers and bike lovers alike can throw in their two cents about the issue. Not to mention the Paula Fletcher voting debacle at City Council, which cost the city a much-needed dedicated bike lane on University Avenue. But as the battle over bike lanes goes on, it’s time to look for some tangible ways of improving cyclist safety in Toronto. 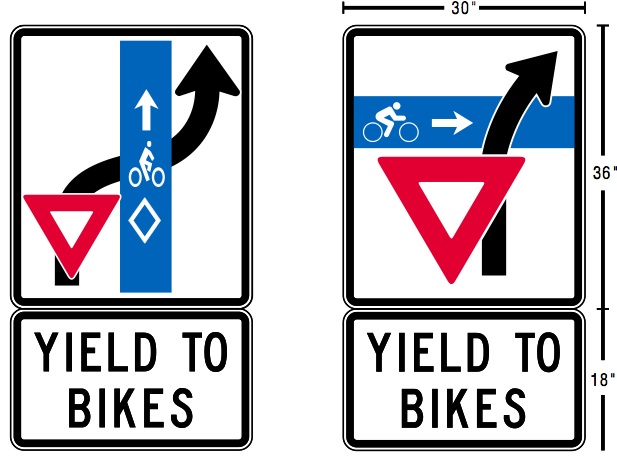 The Portland blue bike lanes project has shown that cyclists feel 50% safer biking on the coloured anes. Further results show there has been a 20% increase in motorists yielding for cyclists due to visibility and awareness. A similar study conducted in Denmark found that coloured bike lanes reduced bike-car collisions by 38% and reduced fatalities and serious injuries by 71%.

Many other cities use coloured bike lane markings to reduce conflicts between cyclists and motorists. The colours range from red in the Netherlands, Germany, Sweden, and Belgium, to blue in Denmark, yellow in Switzerland, and green in France. Portland chose to use blue, so as not to conflict with yellow (the colour of the road lines) and red and green (the colour of the traffic lights and stop signs). Blue also shows up relatively well for people with colour blindness.

The City of Toronto seems intent on using paint markings to define the city’s bike lanes as opposed to phsyically separated lanes, and Portland shares the same attitude. Prior to the blue colouring, bike lanes in Portland were marked with white dashes, similar to Toronto’s. Thermoplastics were used to colour the bike lanes, as they hold up much better to wear and tear than traditional paints. Accompanying road signs were installed to depict when motorists should yield to cyclists.

The overall effect of the Portland project has been an increased awareness of the interaction between cyclists and motorists in the city. Bike lanes are a crucial piece of infrastructure in any major city, and a simple measure like colouring the lanes can have a large impact on cyclist safety.

What would coloured bike lanes do for Toronto’s efforts to increase and promote cycling? Add your comments below.