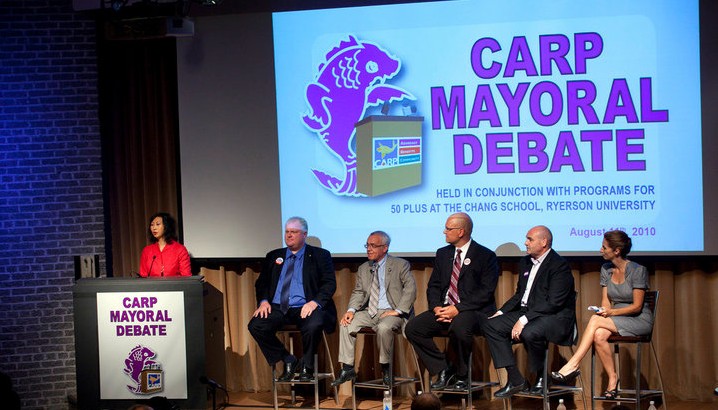 • In our continuing look at each candidate’s take on transit, we turn the glaring spotlight on Rocco Rossi. He’s the man championing the expensive, yet possibly quite convenient Presto cards. They are the same cards that are piloting with GO Transit and other regional transit operations. And Rossi is pushing hard for the smartcards, which, he argues, will reduce fraud and save the TTC millions in revenue collection savings.

• The bike vs. cars debate continues onward. As the Jarvis Street bike lanes are now officially open to cyclists, mayoral candidates are still voicing their distaste for the street’s transformation. This would namely be Rocco Rossi and George Smitherman. The latter who told Spacing Votes: “I kind of regret how the whole thing has played out” concerning the bike lanes. If Rossi is elected mayor, he has vowed that he will strip the freshly-laid bike lane paint and change things back to as they were.

• And then there’s the recent CARP debate that went down at Ryerson. The debate, which centred around senior citizens and their future, saw Smitherman take direct aim at frontrunner Rob Ford. As the tension between the two grows, so does Ford’s lead in the race, apparently. A new study by Pollstra, which may not be all that accurate, concluded that Ford is sitting pretty on a 9% lead in the polls (with 32% of voters still undecided). But with concern to the debate, which saw “Furious George” in top form, the audience gave him a 15% spike in audience approval. As Nabeel Ahmed puts it: “Smitherman won the battle, but Ford may be winning the war.” Indeed.