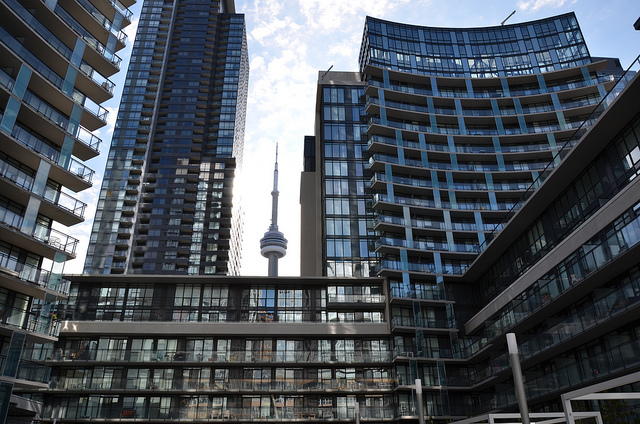 You could call me a yuppie.

I live in a concrete box downtown. I work as a young professional at a prominent downtown non-profit. In the months when I can actually feel my face, I bike five kilometres to work every day. And I’m damn proud of the lifestyle. Well, otherwise than the utter lack of community at CityPlace, the setting for my concrete box.

I have lived in CityPlace (I can hear the mounting exasperation already) for almost two years now. I enjoy the downtown vibe, the access to streetcars, the waterfront, shitty bike lanes and a dog park for Hank—my stupidly adorable Welsh Terrier—all within a short jaunt in a pair of Ugg boots away. I love our concrete box as well, as my partner and I were the first inhabitants in the space, and thus decorated as we saw fit.

What I can’t seem to get past, daily, is the lack of community at CityPlace. Put simply, it’s a hub for a swath of the city’s young people (vast majority are under 35) with a lot of spare change (my underground garage is rife with Mercedes, BMWs and the occasional Aston Martin), that acts like a post-university residence. A residency, however, where no one, although all similar in age and yuppiedom, tends to interact with one another. I know we live in Toronto and all, but guys, it’s getting old.

Since CityPlace has now inaccurately been called a future ghetto, which, based on its proximity to the CN Tower, Thompson Hotel, the waterfront, King St., Bay St. and so on, this notion will never come to fruition. CityPlace may decay, sure, especially with a lot of my fellow condo dwellers renting their condos and not up-keeping them as they would if they had purchased them. But ghetto is a misnomer here.

The real issue, oddly, is the aloofness of community. The number of times that someone has hastily tried to hit the “close door” button in the elevator as I approach is almost humourous. (I can see you, you know, rabid button hitters. I know what you’re up to.) No one smiles in the halls, and if you do, you tend to give the wrong impression, I guess. When walking Hank with his fancy new wool sweater (read: yuppie) in the dog park, a place known to attract the odd visitor, I thought I couldn’t go wrong. Erroneous I was, again. Sure, there are a shitload of dogs in the area, yet it is typically an interaction between the two dogs, rarely the owners. It’s often pleasurable to try and spark a light discussion with a pet owner only to get a disapproving look followed by their quickened escape—much to Hank’s chagrin. (I typically have to apologize to Hank for losing him a new friend. He makes me promise not to open my mouth the next time we meet a potential new friend.)

So, fellow CityPlace dwellers, where’s the love? I know that we don’t have a solid coffee shop—outside of Spot Coffee, which is meh at best—to call ourselves a nice little community with a local coffee shop to hang. (We do have a wickedly overpriced Sobey’s though.) But since we’ve all been around this neighbourhood for a few years now, since we’re all the same age, and since we all have dogs, can’t we, you know, at least say hi in the hallways? Just like in university. We can even be prepubescently awkward about it. Whatever works. Let’s just lighten up a bit, shall we?

Oh, and could you hold the elevator door for me next time? Hank is in a hurry too. He has friends to make.