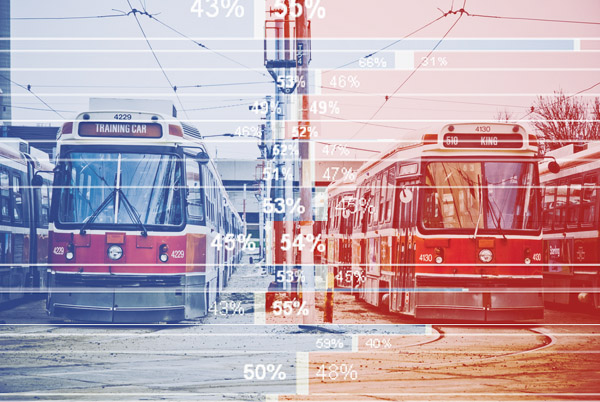 The Toronto Star released an Angus Reid poll last weekend indicating that while Torontonians are split on whether we want subways or LRT, we have little interest in paying for subways and we certainly don’t trust Mayor Rob Ford with our transit future. Though these findings may surprise the Mayor, I found some of the numbers that went unreported in the Star’s story more interesting.

The Star released all of the aggregated data collected in their poll. This allows us to see broadly how personal traits like gender, income, education, as well as factors like 2010 political preferences and primary mode of transportation impact current political and policy preferences.

Having pored over the data, some observations:

Across all respondents, the poll found a statistical tie between Torontonians’ preference for LRT (48%) and subways (52%). When correlated to factors like age, gender, income and employment status there was little deviation from the overall tie. However, other factors did seem to influence preferences for technology: 61% of automobile drivers want subways, as do 64% of people who obtained no post-secondary education. And while the poll suggests that Mayor Ford is right to say that those who voted for him want subways, it is still the case that one in four people who voted Ford in 2010 actually support LRT technology.

As Councillor Karen Stintz frequently reminds us, there is no plan for subways because no one has proposed a way to fund them. Just this week, however, Mayor Ford had a change in heart: revenue tools to fund subways is no longer a taboo subject for him. But respondents to the Angus Reid poll said loud and clear that even if the Mayor is having a change of heart, residents of Toronto are not. It’s not just that one part of the city or one demographic is speaking loudly at the expense of all others — by age, gender, income, education, region of residence, employment status, mode of transit, and 2010 candidate preference (Ford/Smitherman/Pantalone), not one demographic shows a majority supporting new taxes or fees for subway expansion (“for subway expansion” may be the cause of some respondents’ opposition but it isn’t possible to tell from this poll). Two interesting indicators for people who are a bit less likely to oppose tolls than the city as a whole: aged 55+ and earning $100,000+.

Though it’s Councillor Ford who has been most outspoken in favour of uploading the TTC to the provincial government, supporters of his brother’s administration are actually least likely to support that position. Overall 60% of Torontonians believe the provincial government should take responsibility for public transit but that’s the view of just 44% people who also said they voted Ford in 2010. Also of note, the younger and richer the respondent the more likely he or she was to support a provincial takeover. Those who regularly travel via TTC were more likely (65%) to be pro-upload than drivers (58%), and walkers/cyclists (75%) were even more likely to take that view than transit riders. Given the strong contrast in support for uploading between Ford supporters and opponents from 2010, this question may be more a reflection of the lack of trust in City Hall right now rather than a considered view of governance structures.

Indicators that you are most likely to be happy with the direction Toronto is going in generally include driving a car (47%), having voted for Rob Ford in the 2010 election (57%), having no post-secondary education (51%), and making less than $50,000 per year (45%). Generally speaking, where positive/negative outlook was polled, the higher one’s income and education the more pessimistic their views.

It seems conservative-minded people are even souring on Mayor Ford. The same group of respondents that gave Prime Minister Stephen Harper a 41% approval rating gave the Toronto mayor just 31%. And after weeks of stoking Scarborough alienation sentiments, the regional breakdown of his approval rating shows Mayor Ford enjoys just 37% support in that part of the city.

As the polls have been showing for about a year now, the more time Mayor Ford spends in office the worse his numbers get. But the last three months have been so bad that even one-third of people who want subways instead of LRT say their opinion of Mayor Ford has worsened over that time. With numbers like that, it might be fair to say those who want subways over LRT hold their position in spite of the Mayor, not because of him.