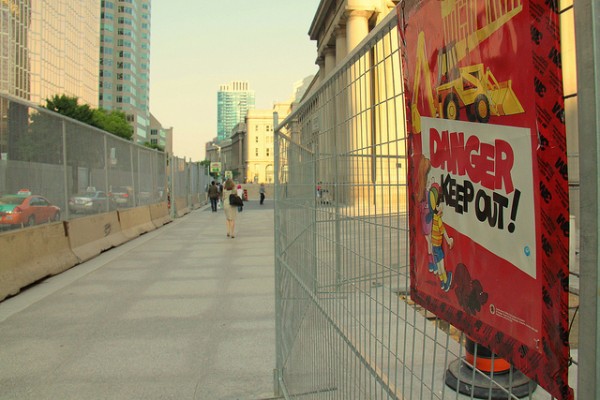 This is a cross-post from Carly Dunster Law. Ms. Dunster is a Spacing contributor who works with food entrepreneurs, food initiatives, and acts as an advocate for small food producers.

Revitalization. Beautification. Rejuvenation. All terms with positive connotations, that conjure up images of something better for city-goers… a more aesthetically pleasing, vibrant streetscape, a historical building restored to its prime, more green space. But sometimes the drive for beautification can have significant negative impacts – collateral damage, if you will.

In the case of the Union Station revitalization, some of those negative impacts come in the form of taking away the livelihoods of six street food vendors. The design for Union Station, at this point, does not contemplate a designated spot for any of these individuals, some of whom have been making a living selling food to hungry Torontonians for as long as 26 years. A compromise was reached with the Toronto East York Community Council recently, allowing the affected vendors to seek out alternative spots within downtown wards. The problem is that the By-Law governing street food vending in Toronto (Chapter 315) sets out quite stringent requirements necessary for a viable vending location, meaning there aren’t a whole lot of places that meet the necessary criteria.

There has been significant media coverage in the past year or so about how Toronto is up to its ears in red tape when it comes to street food vendors. It’s true. At the same time, there’s been an upswing of interest in food trucks, pop-up restaurants, and underground markets, all part of an increasingly dynamic, increasingly creative food scene in Toronto. For some reason though, hot dog vendors often get left out of that conversation.

First, it was A La Cart, a program that, while filled with good intentions, felt like a blow to the city’s hot dog vendors, who had been fighting to serve more diverse foods for years. Because here’s how it worked: one could apply to become a part of the A La Cart program, but you’d have to give up your existing vendor’s permit to do so. And we have something called a moratorium in place in three of the downtown wards. It dictates that no new vending permits may be issued in Wards 20, 27, and 28. Really, the establishment of the moratorium, established in 2002, was probably the first blow – there used to be over 300 vendors, now there are approximately 130 operating in Toronto. The presence of the moratorium meant that if you gave up your license, you weren’t getting it back. Not such an enticing proposition.

A lot of experienced vendors knew from the start that A La Cart would fail. There was the poor cart design, the oversight of the program being handed to Toronto Public Health (instead of sticking with Municipal Licensing), and the requirement that all carts be identical, effectively quashing the expressions of culture and individuality that make street food so awesome. And fail it did. Though there are a few remaining A La Cart carts, the project itself was discontinued.

Then there was the Bloor Street revitalization project, which dislocated eight hot dog vendors in early 2011. Three alternative locations were proposed, but the spots were not comparable to the high-traffic Bloor Street. One vendor stated that he couldn’t even make enough money to pay his permit fee, let alone make a profit or help support his family. He was ultimately granted a permit in a high-traffic downtown location, but only after about a year of wrangling, and more importantly, a year of not being able to make a living.

So, here we are at Union Station. The plan is not yet finalized, and there is some room for hope. But it’s hard not to feel discouraged when reviewing what’s been proposed thus far. There proposed plan has room for only two street food vendor locations, and unconfirmed reports have indicated that those two locations are meant to go to franchises of chain restaurants that will be located within the Station.

Infrastructure investment, like that going toward the revitalization of Union Station, is meant to stimulate growth and create jobs, not unilaterally remove jobs from the hands of street vendors who have worked decades to establish themselves. An important objective of the revitalization project is to create an urban design framework that fosters a pedestrian culture. Street food vending is a part of that.

As Jane Jacobs stated, “…lowly, unpurposeful and random as they may appear, sidewalk contacts are the small change from which a city’s wealth of public life may grow”. The affected street food vendors had been revitalizing Union Station the whole time they’d been there – and we’d be wise to let them continue to do so.