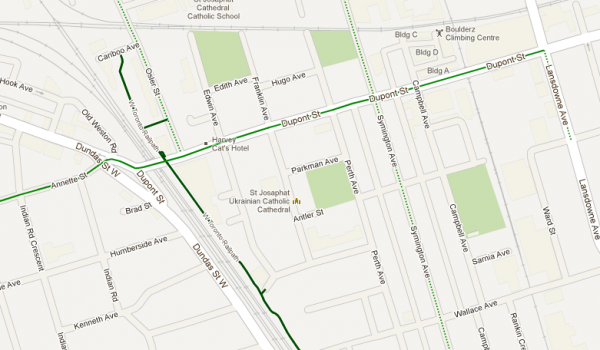 EDITOR’S NOTE: Cycle Toronto issued this press release after this post was published: “Since putting out our press release this afternoon regarding the removal of the Dupont Street bike lanes, we’ve learned from the City that the decision to review the bike lanes dates back to a decision made at the June 2011 Public Works and Infrastructure Committee meeting. Over the coming months, City staff will review all options for Dupont. We’ll continue to monitor the situation.” Spacing would also like to note that City staff originally confirmed alerted the rumour to Cycle Toronto and Spacing.

To be a cyclist in Toronto nowadays is an exercise in always needing to be alert. I’m not talking here about when riding on the road (although you should be), but in relation to what is happening down at City Hall. According to a press release put out by Cycle Toronto today, the City will be creating an Options Report for Dupont Street that may include, with pressure from a certain councillor, the removal of the bike lanes.

From the mouth of Cycle Toronto:

“Cycle Toronto strongly disagrees with Councillor Palacio’s intention to remove cycling infrastructure on Dupont Street. The Dupont Street bike lanes provide a safe passage under the Weston railway bridge, a location where a cyclist was killed and several others injured in recent years.  The lanes are also an important link to the West Toronto Railpath and a connection to the Annette Street bike lanes.  It is critical to the safety and efficiency of our roads that on-road bike infrastructure increase rather than continue to be reduced.  The Dupont bike lane being targeted is already an incomplete link and requires intensified cycling infrastructure to extend east to St George.”

To add further insult, this information comes to light during the city’s Bike Month festivities. Apparently some people at the city are a bit unclear as to the purpose of bike month, which is to promote cycling in the city, not continue with the systematic dismantling of whatever bicycle network we have already managed to cobble together at this point. As shown in the above image from Google Maps, the Dupont bike lanes link up with the West Toronto Railpath as well as the Annette St bike lanes.

According to Ben Spurr over at Now Toronto, Dan Egan, Manager of Cycling and Pedestrian Infrastructure, said that Transportation Services has not be directed to remove the Dupont bike lanes. However, given the current climate at City Hall and past actions that have seen councillors sneak in motions to remove bike lanes without public consultation (Jarvis, anyone?), cyclists can be forgiven for being a little jumpy on this issue.

With the removal of the Pharmarcy and Birchmount bike lanes last year, Toronto actually had a negative amount of bike lanes installed in 2011. This is something that we cannot let continue in 2012. We have to move forward.

Keep your eye on this one.