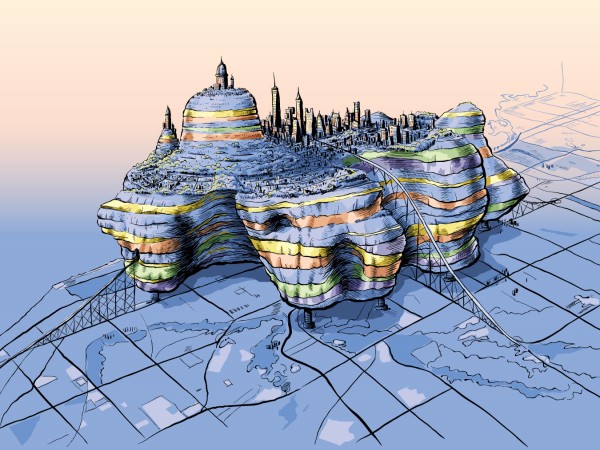 It’s a pie in the sky idea, purposefully.

Upper Toronto is “a science fiction urban design project” that proposes the building of a new city, right on top of the Toronto of today. Once this city in the sky is finished, Lower Toronto will be abandoned.

This is, of course, wildly reckless and entirely unfeasible, but that’s the point. The project is an incredible exercise in imagination, providing an opportunity for citizens to freely express their needs, dreams, and desires for the city. Upper Toronto allows us to start fresh and imagine a new city, free from real-life constraints.

The project began as the brainchild of Jacob Zimmer, Director of the theater company Small Wooden Shoe and long-time Toronto enthusiast and urbanist. Inspired by maps, psychogeography, and the work of French urban radicals The Situationists, Zimmer wanted to create a theater piece about the transformation of cities that would have a real impact on Torontonians.He began thinking about everyday development proposals as their own form of performance in which developers use maps, plans, and pitches to persuade residents and officials. If the performance is convincing, it can completely transform the urban landscape. Through a dramaturgical eye, planning is theater.

So, in partnership with science fiction writer Tim Maly and with support from the Ontario Arts Council, Upper Toronto was launched in 2011 as a multidisciplinary, participatory art project. Beginning with community consultations, Zimmer and Maly are working towards a complete plan for Upper Toronto by 2015.

“The final goal of the project is to put on a sales show to sell people on the idea of Upper Toronto,” said Maly. He imagines a fake condo sales center with real people and plans and models – a performance to convince residents to purchase a home in Upper Toronto.

“Instead of a show about a clearly terrible idea, we decided to start with the premise of the terrible idea and make a city that is otherwise worth selling,” said Maly.

To ensure that Upper Toronto is a city in which people would want to live, based on sound proposals, the organizers developed an extensive project development plan, seeking strong ideas from communities and experts. The goal is to mirror the process by which real development happens: community consultation.

This June, the Upper Toronto team completed a more focused set of visioning workshops with experts in a variety of fields including planning, urban design, architecture, and environmental science. Using scenario design strategies, the group was divided into teams and given a set of future social, environmental, and technological circumstances, as well as resident values, and were asked to develop plans and designs that would support each context. 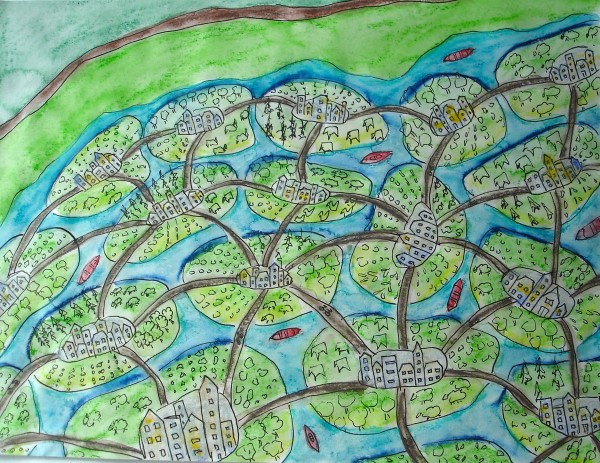 “It was a technique to get people to think with some empathy for others. Cities are diverse and used by many people – this is a feature, not a bug. We are suspicious of plans that are monolithic repeating structures. One size is not going to fit all, so you should plan your city accordingly,” said Maly.

Each group ended up with a completely unique plan for Upper Toronto, presenting a mix of potentially great and horrible futures. With this data and designs, the next steps for Upper Toronto will be to summarize the proposals and commission three artists to produce work based on these three different imagined realities, a process that Maly hopes will “multiply the possibilities.” Following the artist collaborations, Upper Toronto will be planning additional community consultations in the fall, particularly in isolated and previously unreached areas of the city. 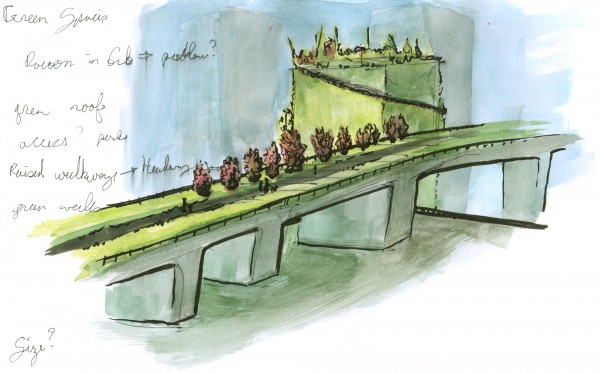 Upper Toronto brings together Torontonians to plan for their city in a manner not unlike many municipally-directed public consultations. But by altering the circumstances under which this planning is undertaken, the frustration and anxiety that typically accompany these processes are eliminated. With this sense of humour, the project avoids the hostility and NIMBYism characteristic of public consultation. Instead, participants feel empowered to imagine ideas, plans, programs, and concepts free from the innumerable constraints present in “real” urban development.

“In a lighthearted atmosphere, people from a huge range of backgrounds can confront some of the biggest issues that face the city,” said Maly, “we think that good ideas are inherently entertaining, so we design our events with that in mind.”