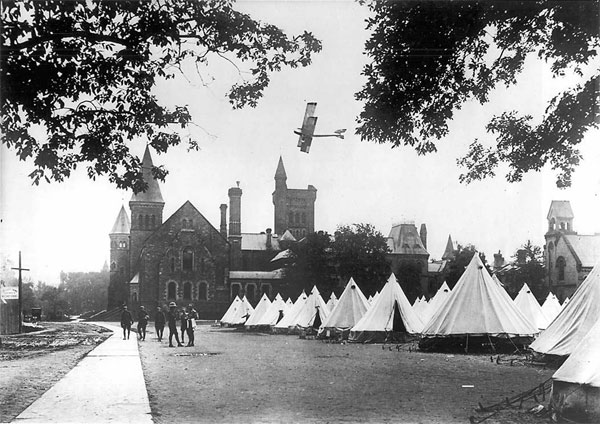 EDITOR: This is the first post of a new collaboration with the Toronto Dreams project by Adam Bunch. The project is a series of postcards hidden around the city for people to randomly find. On the cards are strange,  fictional dreams set in the place the postcard was left. We will be cross-posting from the project’s Historical Ephemera Blog, a place where things Adam discovered during his research, like stories about duels and bank robbers and 100 year-old fish, are collected.

William Faulkner liked to drink. A lot. There’s an interview he did with the Paris Review — one of the few interviews he ever gave — where they asked him what he needed in order to be able to write. He answered paper, food, tobacco and whiskey. Emphasis on the whiskey. They say that when Hollywood director Howard Hawks asked him to write the screenplay for a movie called Road To Glory, Faulkner showed up to the script meeting with a brown paper bag under his arm. As they got down to work, he pulled a bottle of bourbon out of the bag and sliced his finger open trying to unscrew the cap. As he bled all over the place, instead of, oh say, taking a break, he just dragged a wastepaper basket over to his chair so that he could bleed into it while he kept drinking.

Faulkner was really into that kind of macho stuff. And that seems to have something to do with the fact that he grew up during the First World War. He was in high school when the U.S. got involved, and his brother went off to fight in the trenches in France. Faulkner wanted to fight too, so he dropped out of school and tried to enlist in the army. But he wasn’t a tall man, only about 5’5″, so he was rejected. For a while, he kicked around aimlessly, not quite sure what he’d do.

Finally, he ended up at a party where he met a Canadian officer who had an idea. He figured that Faulkner could sneak into the Royal Air Force by pretending to be British.

Now, it’s probably safe to assume that Faulkner was pretty drunk at that party, but this kind of scheme was right up his alley anyway. He loved pranks. (He and a friend used to get a kick out of submitting famous poems to magazines and then collecting the rejection slips. Notes from editors who were unimpressed with masterpieces like “Kubla Khan”: “We like your poem, Mr. Coleridge, but we don’t think it gets anywhere much.”) So Faulkner threw himself full-throttle into trying to learn how to pretend to be British. He worked with a tutor for weeks, turning his iconic Mississippi drawl into an English accent. He grew a moustache because he figured moustaches looked English. He changed the spelling of “Falkner” to “Faulkner” because he figured the letter “u” made his name look English. He even invented a fictional English vicar he called Mr. Edward Twimberly-Thorndyke who, somehow, sent letters of recommendation from England to the British Consulate in New York City. So when Faulkner showed up in NYC with his English accent and his English moustache and his English letter “u”, they signed him up right away. (Although, to be fair, the British had been fighting the war for years at that point and they were pretty much taking anyone who wasn’t already dead yet.)

So that’s how William Faulkner ended up in Toronto. Our city had been taken over by the war — by the Royal Air Force in particular. We’d already had the first airfield in Canada (in Etobicoke at Long Branch, down by the lake) and there were others all over the place: Leaside, Wilson and Avenue Road, the Exhibition… A big chunk of the University of Toronto was turned into an aeronautics school. Colleges were turned into the sleeping quarters for recruits. Tents were pitched on the lawns. Biplanes flew overhead. It was a pretty exciting time for flying in Toronto. Our own Billy Bishop was the greatest fighter pilot in the world, facing off against the Red Baron himself. Amelia Earhart worked here as a nurse (at the military hospital at 1 Spadina Crescent, the building on the island in the middle of Spadina just north of College) and was so inspired by all the flying she saw here that she decided to become a pilot herself.

It all must have seemed impressively macho to a guy like Faulkner, who soon arrived for training. This was only about 15 years after the Wright Brothers’ first flight; you had to be pretty brave to get into one of those rickety biplanes on a good day, never mind when Germans were trying to shoot you out of the sky. The average lifespan for a pilot during the war was something like 11 days. Faulkner studied hard, became popular with the other recruits (he regaled them with limericks so dirty that even on the Internet every source I find says they’re “unprintable”), and looked forward to the day he’d get to fight in Europe.

But that day never came. On November 11, 1918, while Faulkner was still in training, the war ended. Or as he put it: “The war quit on us before we could do anything about it.” Toronto erupted in celebration. People poured into the streets. The mayor declared a spontaneous ticker tape parade. Floats marched down King Street; people threw paper and (for some reason) talcum powder into the air. They parked a car on the lawn outside Queen’s Park and drove over it with a tank in celebration. And at the Military Aeronautics School, the recruits were given the rest of the day off to go have fun.

Which for William Faulkner, of course, meant drinking.

…and flying. He packed the cockpit of a biplane full of bourbon, climbed in and took off. A lot of historians seem to think that it was the first time he had ever flown alone in his entire life. He started doing tricks. Sweeping 180 degree turns. The difficult Immelmann turn, so dangerous that the German ace it was named after, Max Immelmann, died while doing an Immelmann turn. And then, finally, a huge upside down loop which, according to Faulkner, would have been perfect. Except that right at the bottom a hanger got in the way.

Faulkner’s plane smashed through the roof and got lodged in the rafters. For years afterward, the writer would walk with a limp. He’d have a crook in his nose for the rest of the life. But as he hung there upside down in the cockpit, Faulkner was unfazed. He just pulled out some more bourbon and kept drinking.