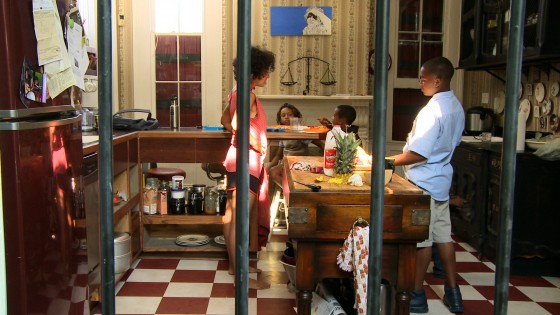 After living in solitary confinement for four decades, how would you imagine a home? For Herman Wallace, sentenced to life in prison in 1974, it would be a sprawling estate with a wrap-around porch, a table for sixteen, and plenty of space for young people to hang out.

Herman’s House begins as an installation piece, as a way for artist Jackie Sumell to grapple with the tiny scale of Herman Wallace’s cell, while paying tribute to the vastness of his optimism. Over five years, the film documents the collaboration between Jackie and Herman, first on her travelling exhibition, and then on the hunt for a plot of land to make Herman’s dream a reality. As Jackie traverses the streets of New Orleans, meeting Herman’s friends and family and looking for the right lot, the injustice of Herman’s story, and of so many like his, are laid bare.

Herman’s House, a big hit at Hot Docs last year (see our full review here) and winner of the best documentary feature at the Harlem International Film Festival, returns to the Bloor Hot Docs Cinema this weekend. Friday’s 9 PM screening will include a Q & A with director Angad Singh Bhalla and producer Lisa Valencia-Svensson.