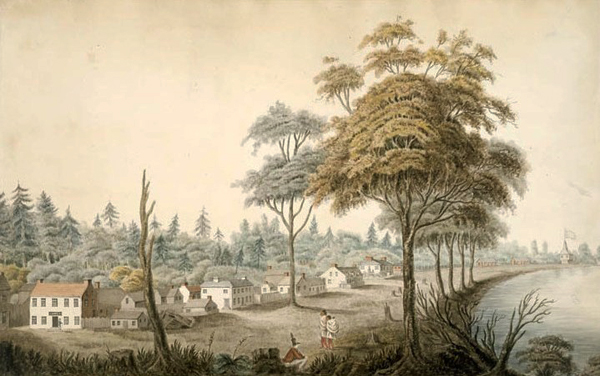 In 1798, John Sullivan and Michael Flannery got drunk. They were drinking whisky at one of the very first taverns ever built in Toronto. The city was only five years old back then, still just a muddy little frontier town. Sullivan was an illiterate Irish tailor. Flannery was known for his habit of reciting Latin proverbs — they called him “Latin Mike”. That night, the two friends drank so much that when they ran out of money, Latin Mike decided to forge a banknote. It was worth about three shillings — a little less than a dollar. Sullivan used it to buy more booze. But before long, the forgery was discovered. And while Latin Mike ran for his life all the way to the United States, Sullivan was arrested and thrown in jail.

He was tried, convicted and sentenced to death.

“Sullivan,” the judge intoned, “may all who behold you, and who shall hear of your crime, and of your unhappy fate, take warning from your example… [I] recommend to you to employ the few days that shall be allowed, of a life spent in wickedness, in humble and fervent prayer to almighty God…”

The execution was held at the brand new jail. It was a small wooden building on King Street (a couple of blocks east of Yonge, where the King Edward Hotel is now), surrounded by a high spiked fence and protected by sturdy iron doors. Inside, there was just enough room to hold three prisoners. Outside, there was a hanging yard. Sullivan’s death was turned into a public spectacle — a crowd of townspeople gathered in their finest clothes to watch the tailor die on a Thursday in October.

But there was a problem. Nobody had ever been hanged in Toronto before. So while the city leaders had no trouble with the theory of killing a man for stealing a dollar, they were having trouble finding someone who was actually willing to do it in practice. It would be another hundred years before the city got a full-time professional hangman. And in the town of just a few hundred people, no one seemed anxious to volunteer.

Luckily, John Sullivan wasn’t the only prisoner in jail that day. He had company in there: a fellow by the name of McKnight. He was willing to kill Sullivan for $100 and a pardon.

As it turned out, McKnight was not very good at hanging people, though. His first attempt failed. Sullivan’s head slipped out of the noose. Some people say the second attempt didn’t work either. By the third, even Sullivan was getting impatient. His last words were something along the lines of, “McKnight, I hope to goodness you’ve got the rope all right this time.”

And this time, McKnight did.