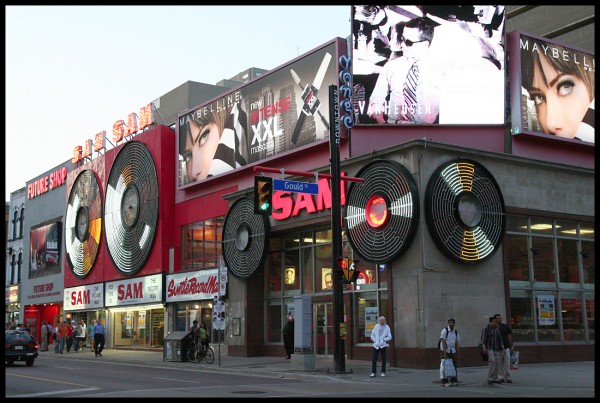 “We had a deal,” was the constant refrain as city councillors and deputants alike grilled representatives of Ryerson University and Heritage Preservation Services staff over the future of the beloved Sam the Record Man sign.

The sign was a prominent feature of the Yonge streetscape for years, until the store finally folded in 2007. A year later, Ryerson entered into a legally binding agreement with the City when it purchased the property to build a new Student Learning Centre, in which the university promised to restore the sign to its original context on Yonge, or near Ryerson’s library on Gould Street. Last year, however, Ryerson told the city, in a technical report, the sign’s restoration was infeasible — citing environmental and technical concerns. Heritage Preservation staff relented, and submitted an item to the Sept. 10 Toronto and East York Community Council, suggesting the city look for another way to commemorate the famous record store.

This… did not go over well with many of the community council’s attendants.

“Why should it be our problem,” councillor Josh Matlow asked the university’s team of deputants. “Why is it not solely yours?”

“We see this as a collaborative process between the university and the City,” said Julia Hanigsberg, Ryerson’s Vice President of Administration and Finance. “We don’t see ourselves as in opposition to either the public, or to city council, or to city staff.”

Throughout the meeting, some troubling revelations surfaced. The first being that the sign — two giant, spinning, illuminated records — has not been included in the Student Learning Centre’s site plan, to date. This, despite the fact the sign’s restoration was promised before architects were engaged to design the new building. The second: information commissioned by Ryerson was the impetus to re-evaluate the university’s agreement with the City. This information, which cited environmental, safety, and technical concerns with restoring the sign, was not peer reviewed by city staff. Essentially, a stakeholder’s own experts’ information can guide city policy.

It was an uncomfortable affair for all concerned.

However, the fate of Sam “The Record Man” Sniderman’s iconic sign has sparked an important conversation about heritage value: what it means, where it’s found, and the extent to which something can be altered or re-contextualized, while retaining its value.

In the case of Sam’s sign, Heritage Preservation Services Acting Manager Mary MacDonald told Spacing, three values were considered. The first was its technical value as a piece of engineering: its neon lights — representative of the technology of the period — and its size and magnitude. Second is its value of association: with the former store itself, with the music industry and its history, and with Sam Sniderman, the individual. The third is what is called “contextual value,” which is the value of the sign in its traditional location on Yonge, its history there as part of the streetscape, its value as a familiar landmark, essentially.

This agreement is “restoration” as the term is understood in heritage preservation circles. For true restoration to occur, the technological value MacDonald identified would have to be preserved. Ryerson’s proposed “commemoration plan” — which includes on-site commemoration and a website — would, perhaps, help preserve the sign’s value of association and context. But, without preserving the sign’s technological value, true restoration can’t be said to have occurred.

Was the sign’s restoration part of the legally binding agreement Ryerson made with the city? Unquestionably. But the university’s stated issues with restoring the sign sparked a conversation amongst local councillors and city staff about another option, which MacDonald terms “rehabilitation.

“Rehabilitation is, basically, to bring something up to a contemporary standard,” said MacDonald. “You’re still respecting the values, but you have a little bit more leeway, because you are re-purposing it for the future.”

Can giant spinning records made of, say, more energy efficient LEDs still rehabilitate Sam’s presence on Yonge? Can new technology preserve at least some of the associations attached to the giant neon disks, and its context in the area?

“I think we have to have that discussion,” said MacDonald. “The alternative recommendations that councillor Wong-Tam put forward still speak to restoration.”

Councillor Kristyn Wong-Tam’s recommendation, pending city council approval, does hold Ryerson to its promise of restoring the genuine neon article. Where the sign will go is another conversation yet to be had, but the location must satisfy the city’s chief planner, in consultation with Wong-Tam, as well as the city solicitor.

Wong-Tam told Spacing that, Sam’s sign aside, Ryerson’s proposed Student Learning Centre could be a new landmark for Yonge, and it has the City’s design staff excited. The new building’s place in the context of the area, and its own value as a piece of architecture, was its own, involved process. Saying “a deal is a deal,” Wong-Tam said, is a guttural reaction.

“City council and community councils are constantly re-evaluating the quote-unquote deal,” Wong-Tam said. “I don’t think there is anything extraordinary, or out of business practice when Ryerson says ‘we would like you to re-evaluate the agreement’.”

That doesn’t mean Ryerson is off the hook

“My motion actually, in many ways, holds their feet to the fire,” Wong-Tam said.

“We will approve the commemoration plan, because we’ve already approved the building,” said Wong-Tam. “And now, Ryerson: you have 12 months to go find us another location. Failing the successful proposal of a new location — as evaluated and recommended by staff — you are left with one recourse. That one recourse is to come back and hang those signs.”

Wong-Tam said she does agree: the city does not do enough to preserve its heritage, and would one day like to see memorabilia, like the Sam sign, perhaps preserved in curatorial fashion. A sort of Toronto museum. Yonge and Dundas Square — no stranger to the big and flashy — has also been suggested by many as a suitable location. However, Wong-Tam points-out, the square has its own board of management, which Ryerson would have to persuade.

That’s “nowhere close to good enough” for Sean Boulton, who gave a deputation at the Sept. 10 community council.

“They’re giving-in too easily on the idea that this is not doable,” he told Spacing. Boulton would have liked councillors to examine the technical report submitted by Ryerson, which staff did not peer review, before suggesting a new plan.

“It feels like they’ve let Ryerson off the hook,” Boulton said. “That’s what people will take away from this.

UPDATE: Sean Boulton has since been invited to join a working group, established by Mayor Rob Ford, to discuss possible solutions before city council considers the matter. The group first met Monday. Boulton told Spacing the mayor was interested in the role the city can play in reaching a solution. The group will meet again, Sept. 30.