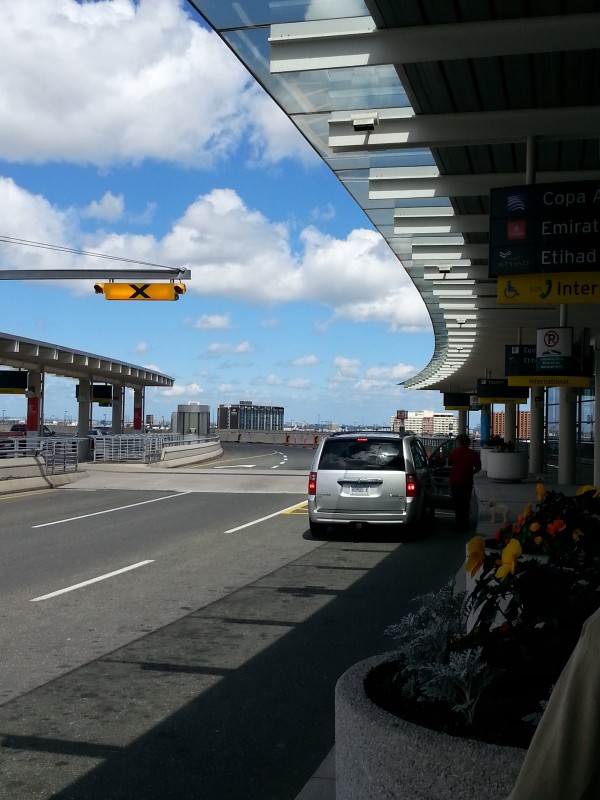 Recently, my father and I dropped my mother off at Pearson airport. As we were saying our goodbyes, I thought about what my mother might think when returning to Toronto. I had never really paid attention to the landscape when driving from the airport. After my mother had left, I tried putting myself in her shoes on her return, to try looking with fresh eyes. Toronto says quite a lot in the short space between the airport and the Gardiner.

We got into the car and blasted through a tangle of roads, flying into a stream of cars heading southbound on Highway 427. The tight curl of the highway ramp set us into the stream, gently but with deliberate force. Cars swam frantically towards a distant goal. As we gained speed, we aligned with the other cars and we were motionless. Instead, the city moved in front of us, a dance, a performance. We were the audience, the highway, a theatre.

The first scene: a cold, bright, concrete expanse. The area surrounding the airport is industrial and commercial, with little semblance of life or community. This is the harsh functional space at the edge of the city. Power lines cut through the sky, concrete and roads turning and tumbling over each other. This was a place of speed and commerce. Uncovered, the scene welcomed no one, instead asking us (forcing us) to remember the shape of the work and power that built the city, and the uncomfortable truth of the spaces that create so much of our wealth.

Scene two revealed itself as we turned a curve – a curtain of sound-reducing panels opened on a wide landscape. Beyond us stood Willowridge, a set of modernist towers surrounded by a green horizon of trees. The buldings stood coldly huddled, defending against ever-encroaching nature on the little space remaining for them. The weight that these buildings were built with make them seem stocky and hard. Brick and mortar, ruddy and strained, sore bodies dreaming for a moments rest. 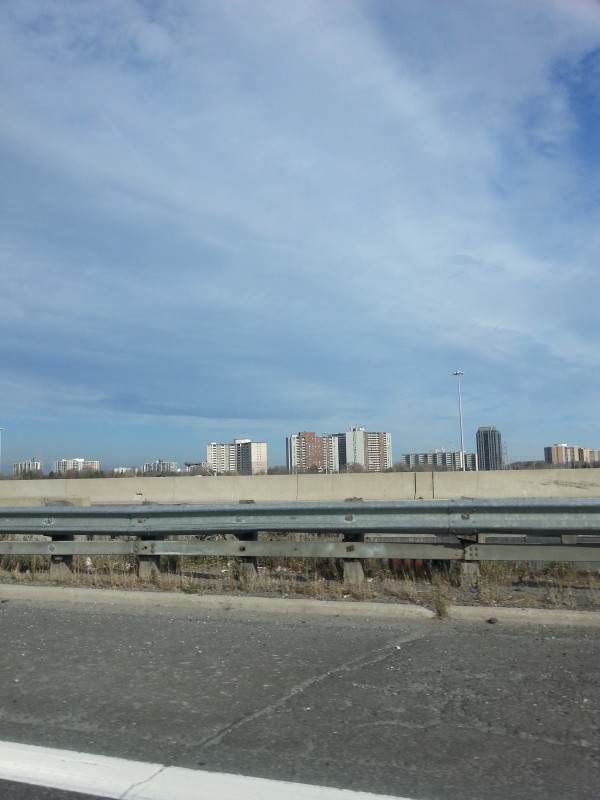 The final scene revealed itself as the curve completed. We were placed on a straight path south extending for kilometers in front of us. A gallery of towers lined the road, each engrossed in its own defense, ignoring us, the audience below. Each tower was set against the grassy plot at its feet, defiant. The buildings said nothing, but their strained poses spoke volumes. In their empty spaces, they were struggling.

In the distance something glimmered, catching my eye. At the end of the way something stretched a hand towards us. Or was it a beacon to the towers behind us? We were all the same. In front of us was a symmetrical set of four new condominiums. Still incomplete, these will be lit with the sparse lights of a cadre of condo dwellers, lighting the way towards the lake. My father remarked quietly, “Look, it’s a gate.” 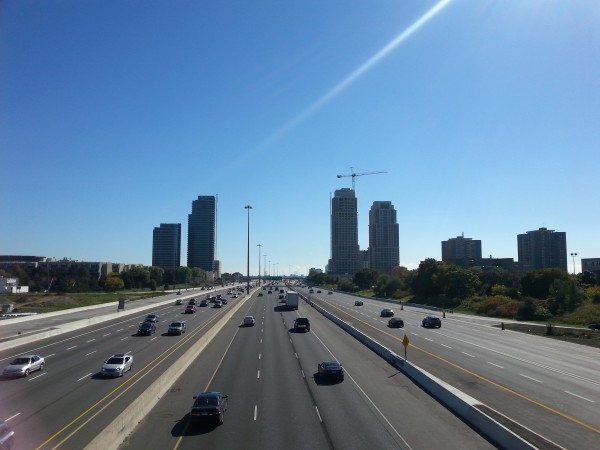 The gate stands south of Burnhamthorpe Road, around the old site of the Valhalla Inn. Built over the ruins, the gate rises tall, higher than any other structure in the area. While not set in line, when driving south, the four towers arrange themselves symmetrically – a trick of perspective, dissolving as you pass by.

In their structures we see the recent history of our city. Each columnar tower is built condo-unit by condo-unit. Each unit is a brick of Torontonian gold. On one side stands the persistence of our city is set in precast concrete. On the other, our fragile new-found wealth in crystalline blue glass. At once noble and vain, gentle and severe.

The road to Toronto tells a story about our city. Through the concrete, the wires, the bricks and tangled roads, gleams our new gate. It is a structure that begins to (perhaps accidentally) emphasize Toronto’s wishes of grandeur.