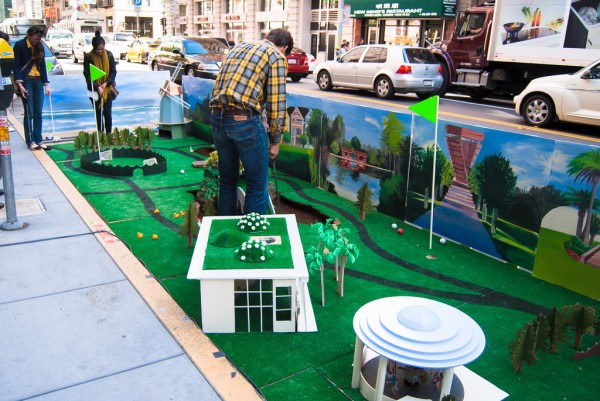 Boston’s new mayor is hoping a new city program will result in some “random awesome designs” submitted for the city’s public spaces. The newly launched Public Space Invitational is, as Mayor Marty Walsh told the Boston Globe, “a call to designers, artists, and engineers to rethink our streets, our sidewalks, and all of our civic spaces.”

With this announcement, Boston joins other cities like Los Angeles, Vancouver and San Francisco, which have their own city programs to get communities to rethink public space to varying degrees.

While the programs in those three cities focus on creative ways to convert underutilized road space into plazas, parklets and other forms of the currently fashionable micro park, Boston’s seems more focused on interventions in existing public space, especially of the technological kind.

The program’s guidelines say that ideas should “have an inherent sense of wonderment and discovery built into them.” They should also be able to be implemented within six months. The city will select a maximum of six projects and award grants of up to $4,500 to make them a reality.

It’s fascinating to watch the proliferation of these public space programs in city after city. Especially because it doesn’t seem that long ago that taking over a street side parking spot and creating a pop-up park was a form of activism. Now these “parklets” have become a recognizable part of many city’s streetscapes with formalized city programs to encourage their installation.

Toronto, however, is late to the party. Despite the actions of Councillor Kristyn Wong-Tam who helped spearhead projects like Celebration Yonge and last summer’s Church Street Parklets, city hall lacks the experimental public space culture that is springing up in major cities around the world. I’m sure if the city asked, Torontonians could produce a little random awesomeness of their own.

photo of a San Francisco parklet by Sergio Ruiz from Flickr