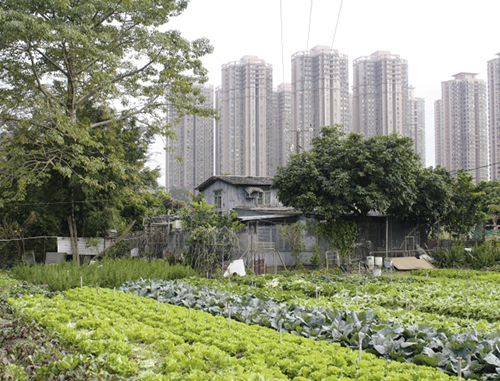 The exhibition “Hands-On Urbanism: How to Make a Difference,” at Urbanspace Gallery until March 7th, showcases stories of groups of people — who aren’t architects, planners, or politicians — who have changed the face of cities in times of crisis.

The construction of gecekondu settlements in Istanbul is one example. The houses making up these settlements were initially constructed in the middle of the night on public land with reclaimed materials. (In Turkish, “Gece” means night and “Kondu” means landed.) Though at first not officially sanctioned, the local government came to accept gecokondus in the early 1960s when it realized they provided an inexpensive solution to housing urban migrants. Residents grew food in courtyards, built networks, and found jobs in nearby factories. Since the government didn’t have to incur the costs of providing infrastructure, it eventually, for a time at least, just let things be.

Elke Krasny, curator of the Hands-On Urbanism exhibit, refers to this kind of development as “bottom-up urbanism.” Others have described it as “self-service urbanization.” Rather than wait for the government or urban planners or designers to fulfill an urgent need — like the need for housing — residents, in these cases, take it upon themselves to appropriate land to build homes or subsistence gardens or non-profit settlement houses that provide community amenities such as education or daycare.

Krasny has found examples of bottom-up urbanism throughout the world: In 1889 in Chicago, for example, Jane Addams brought the first settlement house to the United States, which provided much needed programs for struggling immigrants. Between 1919 and 1923, subsistence farmers who gardened and built informal settlements on squatted public land in Vienna convinced the local government to support a plan to build thousands of units of non-profit co-operative housing there. New York in the early 1970s saw the emergence of the Community Garden Movement, where “Green Guerillas” constructed vegetable gardens on vacant lots in the Lower East Side.

Over the course of time, many of these citizen-led changes were later altered by top-down forces, and these parts of the stories are described in the exhibition as well. Even though, as the LSECities’ website describes, gecekondu settlements evolved into “blossoming garden cities,” their construction was declared illegal in 2004. Some of the co-operative housing built in Vienna has since become privatized. And while many of New York City’s community garden sites have become permanent, others, particularly those that served poor, urban migrant populations, were later sold off in the late 1990s to make way for new buildings.

Krasny’s research has led her to wonder about the role that architects and urban planners might play in bottom-up urbanism. This weekend, she will explore answers to this question and others at a symposium that the Centre for City Ecology and the John H. Daniels Faculty of Architecture, Landscape, and Design have planned to coincide with the Urbanspace Gallery exhibition. Krasny, a cultural theorist, curator, writer, and lecturer at the Academy of Fine Arts Vienna, will give a keynote lecture tonight (February 28) night at 401 Richmond. This will be followed by a day-long symposium tomorrow (March 1) at the Daniels Faculty, with presentations and panel discussions that will look at self-organization and communal landscapes, and an architecture of engagement.