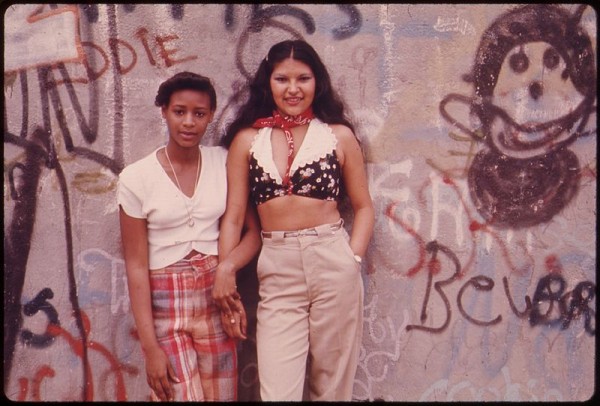 I begin by clumsily expressing my condolences for the sudden passing of Karla’s husband Derrick.

Karla is a childhood friend that I grew up with in public housing. She is gracious and we fall into stride with each other as though the years and postal codes between us mean nothing. She shares the details of her deceased love’s health issues. He was diagnosed with a thyroid condition several years ago. Shortly afterwards, he suffered two heart attacks. But through it all the two high school sweethearts remained dedicated to each other and their seven children. And then one Saturday morning, after greeting the day and each other with a kiss, he was gone.

By this time Karla had a bit of experience with abrupt and bitter endings. Five years prior, her brother was murdered in front of a bar after attempting to break up a fight between two female patrons. Although there were a number of witnesses, the case went cold because people refused to come forward. A few years later Karla attended the funerals of our two childhood friends, Andrea and O’Neal, both succumbed to medical conditions prior to their fortieth birthdays. And then, like salt sprinkled in an exposed wound, Derrick, her lifelong love, was suddenly taken.

It is past midnight, I have mounting deadlines, and Langston, the diabetic cat that I am fostering, needs his insulin shot first thing in the morning. But once again I find myself awkwardly caught between Toronto’s growing class divide.

I do not know a single person from the suburban neighbourhood my mother moved us to after leaving the public housing community where I grew up who has suffered such tragedy. This assertion isn’t sentimentality talking, statistics corroborate my assertion that we’ve got a class crisis on our hands. Stats Canada reports that First Nations people, single parents, seniors, and people with disabilities are most impacted by poverty. And let’s not forget children. Although we direct relief efforts to child poverty charities overseas, as we should, a UNICEF survey shows that our own child poverty rates are abysmal. We rank approximately 3.5 points behind other “developed” countries. Many Canadians are struggling with sky-rocketing housing costs and it is estimated that over 30,000 people rest their heads against cold concrete each night. These alarming stats animate just a fraction of the real impact of the city’s poverty problem. Contrary to popular belief, poverty is not simply about the lack of cash required to get “stuff” and live in fancy neighbourhoods. It is a condition that undermines self-worth, compromises people’s health, contributes to violence within communities, and creates tremendous burden on the economy.

Although rich in culture, innovation, and opportunity, cities are not urban enclaves of honey and privilege. Cities are constantly reckoning class tensions. Whether initiating the redevelopment of neighbourhoods, negotiating the location of social services or considering transit options which extend through low-income communities, many of our municipal and even national debates have the underpinnings of class. Take for example, Justin Trudeau’s misguided video in which he declares his commitment to the “middle-class” asserting that they, or rather we, built Canada. As an often exhausted professional and mother of one whose work week rarely caps at 40 or even 50 hours, I too am aware of an increasingly overstretched and vulnerable “middle-class”. However, my early childhood experiences don’t allow me to negate people living in single-industry cities facing long-term unemployment, small to mid-sized business owners going up against Goliath-sized chains, children suffering the backlash of lack, and individuals with increased risks to their physical and mental health.

And I certainly can’t ignore the stories of childhood friends like Karla.

After we discuss the deaths of her husband, brother, and our childhood friends, she shares yet another tragedy with me. Her home in the Malvern public housing community recently caught on fire just weeks after the first anniversary of her husband’s passing. The house is currently being repaired and all seven of her already distraught children are being temporarily sardined in a bleak two-bedroom apartment. When I visit to drop off some clothing (everything was lost in the fire) my heart is filled with so much sorrow it threatens to break. That’s what poverty does — it breaks and sometimes kills people. A study analyzing the impact of class disparities conducted by The Hamilton Spectator showed that there is a 21-year gap in life expectancy between that city’s most affluent and poorest neighbourhoods. I understand the challenge of remaining competitive in an increasingly volatile global economy but poor people cannot pay for our prosperity and the development of cities with their lives. If we don’t begin to have more open discussions about class I fear that more of my childhood friends will die prematurely. I fear that I will drown in the pain of making it out to the other side while others, no less valuable or talented than me, suffer. I also fear that our silent complicity will kill the city’s radical promise of opportunity, forward-thinking and compassion.