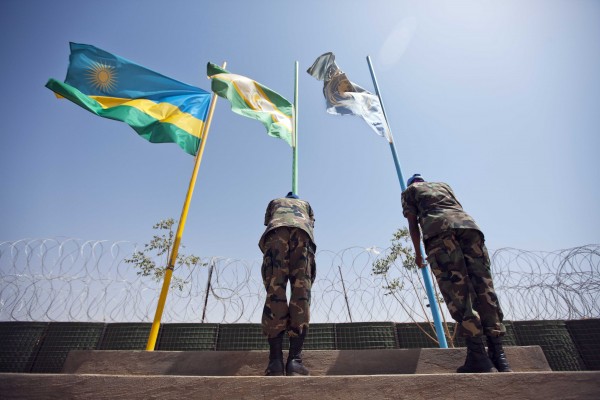 This year marks the twentieth anniversary of the most recent Rwandan genocide against Tutsi people. Like most non-Rwandan people I learned about the genocide through media accounts depicting vicious attacks against innocent Tutsi people, providing political context for the crisis, and critiquing the slow intervention from the international community. Later, as part of a grad school research project, I had the opportunity to learn more about the ways that the genocide adversely impacted the Tutsi people long after the same media turned its gaze to a sexier more current topic. This, and the fact that I have two Rwandan friends that I adore, is what led me to my first ever commemoration event.

When I asked my friends what to expect they told me that it would be a day of sharing social and political insights behind the genocide, challenging historical revisionist trying to deny that the atrocity happened, and healing.

For some reason this word made me nervous. Having grown up in a public housing community ideas of tragedy, resilience and survival are not new to me. But healing…in public? Up until the day of the event my conceptualization of healing was tied to ideas of privilege like trekking to Europe to “find yourself” or taking a personal day from work because you didn’t score the desk with the beautiful view. The pragmatist in me preferred to use words like resolving or processing. Besides, I wondered, “Shouldn’t all of this healing be done in private?” In addition to being mildly skeptical, I was concerned that all of this public healing stuff might splatter up on my shoes, infringe on my personal space boundaries, and encourage emotionally dangerous “oversharing” like horrible reality television.

My misgivings became even more pronounced when my knees began to buckle the moment I entered the room. I felt something that I can only describe as palpable pain. Thankfully my friend MJ, a scholar and community activist teaching at OISE, had saved me a seat right at the front of the room. As I settled nervously into the tiny seat I knew that my shoes were about to get splattered on. My other friend Umwali, a policy expert in the mental health sector and long-time member of the commemoration organization team, introduced a speaker who provided excellent insights into the genocide. He skillfully detailed how the first seeds of division were sowed by colonizers who sought to ascertain power by systematically creating more opportunities for the Hutu people thereby socially elevating them above and pitting them against the Tutsi people. He spoke about how all Rwandans allowed these false ideas of cultural superiority to take root in workplaces, institutions, and homes. He stressed that Rwandans, not the international community, would need to assume ultimate accountability for healing and sustained peace. I dangled from his every word, impressed by his analysis, candor, and call to action.

And then “it” — the messy healing stuff  happened.

Umwali asked everyone to turn off all electronic devices and reminded everyone that applause was not appropriate. After all this gathering was not a concert or sporting event. A woman in her early thirties approached the podium just as the photo of a man and woman was projected on the screen. Immediately I know that they are her parents; I also intuitively know that they were lost to the genocide. Through tears and stretches of uneasy silences, their daughter breathes life into the old photograph testifying to their love for each other, their commitment to family, and their respective interests. And so it went, one by one the survivors of the genocide, many of whom were children or teenagers when it happened, came forward with photos and shared stories of their loved ones in both English and their native language, Kinyarwanda. Curiously, they didn’t share gruesome details of the massacres or feeling of deep resentment – both of which would be understandable. Instead they focused on honouring the lives of their loved-ones. The woman beside me never quite makes it up to the front to speak but she begins to cry. I wrap my arms around her and she tells me that she moved here recently because in spite of time, tribunals and talk of peace she never felt safe living beside the people who victimized her family. I have no words so I just hold her.

Although private, healing is in fact deeply political and public. We cannot build healthy communities if we do not create public spaces for remembrance, sacred storytelling, and informal support. Healing rituals in public spaces provides us with knowledge of our neighbours beyond cuisine and cultural festivals. They are an opportunity for us to do what my friend Umwali did from the afternoon into the night. As each speaker approached the mic she stood behind them – hands open facing upwards – symbolically holding up the beautiful ideal of community.