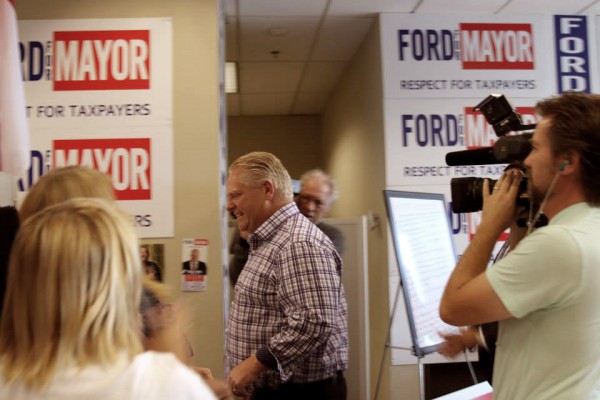 During his pugilistic interview with Matt Galloway on CBC Metro Morning on Friday, mayoral candidate Doug Ford repeated his oft-made claim that he’s donated his entire councilor salary to charity.

While he’s never quantified that statement, it’s worth doing the math: over four years, if we are to take Ford at his word, he would have donated as much as $421,588 for the full period (City of Toronto councillor compensation also includes generous health, life insurance, dental and long-term disability coverage).

According to a Canada Revenue Agency contribution calculator, such donations would have yielded a $120,000-plus credit that could be used to offset the taxes owing on Ford’s other income, which presumably comes in the form of salary, commission and dividends related to his position at Deco Labels and Tags.

Despite the fact that he’s frequently cited this and other charitable activity, including a $3,500 donation to the Pride Parade, Ford has never once provided a shred of proof that he actually did hand over his salary as a public office holder.

Jude MacDonald, who last week launched a complaint against Ford, citing conflicts of interest over his votes on matters relevant to Deco’s business, points out that neither the media, nor the other mayoral candidates, have pushed him to come clean on his claim, which appears, on its face, to be Ford’s way of demonstrating his fiscally conservative but community-minded approach to public service.

So here’s the question: is it reasonable for voters to demand that he produce proof, or is there a partisan reverse onus at play here – a progressive version of the notorious Tea Party/”birther” demands about Barack Obama’s birth certificate?

Before parsing this problem, it’s worth noting that politicians from time to time do make a public point of offering up a portion of their compensation to charity. During the U.S. government shut down last fall, the Washington Post reported that almost 250 congressional leaders had pledged not to accept salaries for the duration, with many offering to donate that foregone income to charity. The gesture was about not accepting pay while the government wasn’t functioning, and hundreds of thousands of public servants were at home, not drawing a paycheque.

Here in Canada, Calgary mayor Naheed Nenshi, early in his mayoralty, pledged to give 10% of his salary – or about $20,000 – to charity. His reason: that the approved compensation for Calgary’s mayor was too high (at over $200,000, it’s the highest in Canada). Some councillors followed his lead; in fact then-Edmonton mayor Stephen Mandel turned down a 5.3% pay hike. As far as I can tell, Nenshi has not disclosed which organizations have benefited, and the issue of whether he came through on the pledge is not a source of controversy in Calgary.

At least one other Alberta politician did have his fingers burned, however. Progressive Conservative MLA Carl Benito, according to the Edmonton Sun, was elected partly on a promise to donate his salary to a scholarship fund. But that commitment became a lightning rod when critics pointed out that his actual contributions fell well short of the apparent pledge; Benito claimed his promise had been misunderstood. He was later ousted in a nomination battle.

So back to the original question: If Nenshi hasn’t been seriously asked to disclose his contributions, why should we demand the same of Ford?

As a general point of principle, I’d argue that any politician who publicly pledges to donate a large portion of his/her salary to charity owes their constituents some accounting of the same. Such promises are inherently political – they are meant to convey some kind of presumably advantageous message, either about a policy issue (i.e., the need for more restraint in political salaries, a la Nenshi) or as a personal statement (i.e., the positioning of a politician as public spirited, a la Ford).

But precisely because these statements are politically motivated, it is incumbent on the media and electoral rivals to demand a plausible explanation, as is done with other claims by those running for public office. In fact, because tax credits (i.e., forgone federal revenues) are involved, the bar should be even higher.

We need politicians to be truthful about their records and biographies. In the run-up to the 2010 election, for example, Rob Ford frequently told voters he was the chief financial officer of Deco. But when he was asked during an editorial board meeting with the Globe and Mail about how much time he spent at the company, Ford replied that he was there a few hours a week, signing cheques. That’s not what CFOs do; indeed, during the campaign spending inquiry, documents emerged showing that another Deco employee actually had that job title.

Now take the case of John Tory’s frequent claims to have been a fundraiser for various charities. Whatever else you think about his motivations, those statements are readily verified by third parties, including the City of Toronto itself. His corporate salary and benefits, moreover, are also subject to public disclosure [PDF], and thus available to voters and investors alike.

Without getting too far into the extensive inventory of his deceptions, Doug Ford has been caught out lying about another claim intended to broadcast his probity and desire to reduce the taxpayers burden. From the beginning of his term, he said repeatedly that he had spent absolutely nothing on his office budget.

Indeed, on council’s quarterly 2011 and 2012 office budget disclosure records, which includes both public and private spending, he regularly listed $0. But that claim turned out to be false, as the documents in a 2012 freedom-of-information request confirmed. He had actually spent over $2,000 from his own pocket on web-hosting, stationary and other supplies – expenses that, according to council policy, had to be publicly disclosed, even if he himself paid for them.

There’s no (legal) way for the media to access public records about the tax receipts Ford (or anyone else) receives in exchange for charitable contributions. So absent brown envelopes from rogue CRA auditors, proof can only come in the form of full disclosure by Ford himself, or from those organizations which have benefited from his much-touted generosity.

Maybe he did give almost half a million dollars to various Toronto groups that needed the support. If so, I think voters would benefit from hearing those stories, seeing the numbers, and understanding precisely how Ford dispensed all that cash (via foundation, or some kind of request vetting process, etc.).

After all, Ford could have chosen to simply make all those donations without trumpeting the fact, as do many philanthropists who simply prefer to give instead of making a big deal out of their generosity.

But he didn’t do that, did he? Rather, he talked incessantly about his donations as a way of communicating that he’s got a soft heart and a social conscience. There’s a political dividend that flows from his gesture. And for that reason, he now needs to prove the claim if he’s including this detail in the record of achievement that he’s putting before Toronto voters.