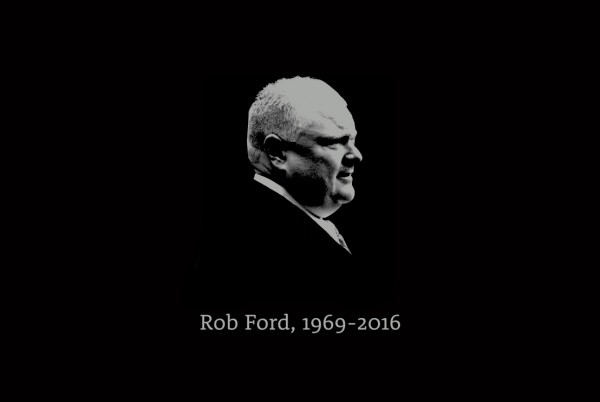 If I have to alight on one incident of surpassing significance amidst the mayhem of Rob Ford’s mayoralty, I find myself bypassing the chaos of the scrums outside his office, the humiliations of the trials, the self-destructive behaviour, and the endless examples of how this curious man coarsened Toronto’s civic discourse.

Rather, I think back to that riveting moment, deep into a long night of deputations about proposed budget cuts in July 2011, when 14-year-old Anika Tabovaradan eloquently articulated her sense of loss and hopelessness in the face of Ford’s gravy-train agenda. Her local library branch, where she went to do the homework that would allow her to get a career and then start paying taxes so that other kids could benefit from such amenities, had been threatened by cuts or closure.

“I’m not a director, I’m no president, I’m just a 14-year-old from Scarborough,” she sobbed. The mayor listened, not just impassively but unaware, as indeed were we all, of the immense consequence of what had just transpired.

As observers of his career may note, Tabovaradan’s plea, which was amplified in the media and at city council, came to represent a psychological watershed: the point at which Ford’s populist grip on council and the city’s politics began to waiver, wane, and then vanish during the hallucinatory years that followed.

Why travel back to this particular episode in the hours after his death?

I want to write candidly about him, but not cruelly. It is, as many will say, a terrible personal tragedy that he died so young and in pain, and that he leaves behind a young family.

But I don’t want to reach for maudlin obituary prose here. I didn’t respect Ford as a public person (the only way I ever encountered him), and didn’t like what he did to our politics. What’s more, like many reporters on the City Hall beat during those four nutty years, I benefited professionally from that three-ring circus, and the adrenaline-fueled thrill of being in the middle of a story that made it onto the New York Times’ home page more than once.

Many people will feel bad about Ford’s premature death, but not sad.

Yet we are compelled to seek meaning in this life that has come to a close, and particularly a sense of meaning that extends beyond the universe of his family and friends.

It seems to me that Ford’s place in the city’s story is that he, with his brother Doug, caused so many Torontonians to wake up and to see, as Tabovaradan did, precisely what was at stake. In a relatively short period, he tore up transit plans now being dusted off, and slashed bus, recreation, and community services in the very parts of the city he claimed to defend. Ford hypocritically misused the city’s resources with his football coaching, behaved crudely to constituents, bureaucrats, and fellow councillors; showed little regard for the dignity of the office; and embarrassed the city in front of a global audience. Eventually, even early supporters came to see what was being squandered.

As Joni Mitchell once sang, You don’t know what you’ve got ‘til it’s gone.

Yet despite the best efforts of his advisors, Ford lacked the Machievellian instincts and self-discipline to carry through with his penny-pinching agenda, and cement all that accruing loss into place. For all his bluster and dissembling, he couldn’t, in the end, defend his record or look out for himself; perhaps that weakness explains the self-medicating behaviour that accelerated during his term.

So thanks to the insistently dialectical nature of politics, he gave us an incredibly important opportunity to re-discover the qualities that make Toronto a peaceful and aspirationally inclusive city — a place where most people understand that the public sphere is more than a cost centre.

It’s certainly not the legacy Ford intended, but it’s a powerful legacy nonetheless.