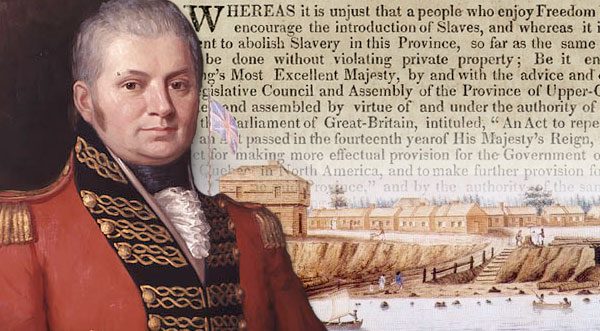 Meet John Graves Simcoe. Founder of Toronto. British veteran of the American Revolution. And an avowed abolitionist with a very weird and complicated relationship to slavery.

Simcoe hated it. Back home in England as a Member of Parliament, he gave anti-slavery speeches in the House of Commons. And when he was picked to be the first Lieutenant Governor of Upper Canada, he made it clear: he saw no place for the practice in his new province. “The principles of the British Constitution do not admit of that slavery which Christianity condemns,” he wrote before he officially took his post. “The moment I assume the Government of Upper Canada, under no modification will I assent to a law that discriminates by dishonest policy between natives of Africa, America or Europe.”

And indeed, one of the very first things Simcoe did when he got to Upper Canada was to introduce a bill to end slavery in the province forever. In July 1793, his “Act Against Slavery” became the very first slavery-abolishing law ever passed anywhere in the British Empire. To this day he’s celebrated as the man who ended slavery in Upper Canada — more than 40 years before it was abolished across the Empire and 70 years before the Emancipation Proclamation in the United States.

But things weren’t quite as simple as that makes it seem.

For one thing, Simcoe’s law wasn’t nearly as groundbreaking as it sounds. By the time he came to Canada, there were no slaves in England — a court decision had freed them all fifteen years earlier. Compared to the Mother Country, the Canadian colonies were behind the times. Hundreds of slaves were “owned” by the colonists in Upper Canada, many of them brought north to the new province by Loyalist refugees as they fled the revolution in the United States. The British government had actually encouraged the practice, passing a law in Westminster that promised new Canadian settlers they would get to keep their slaves.

So while slavery in England was already over, if Simcoe wanted to get rid of slavery in Upper Canada, he was going to have to pass a new law to actively abolish it. And that wasn’t going to be easy.

The Legislative Assembly was an elected body. But the members of the Legislative Council were hand-picked by Simcoe himself — it worked a bit like the Senate does today. And Simcoe packed his Council full of slave-owners. At least five of the nine members were either slave-owners or from slave-owning families. They formed a majority. Simcoe, determined to abolish slavery in Upper Canada, had made it almost impossible to do.

But he was still going to try. It was the resistance of Chloe Cooley that gave him the opportunity he needed. Cooley was a Black woman living in slavery at Niagara. When her “master” sold her to someone on the American side of the river, he tied her up with rope and forced her into a boat to be taken across the border. Cooley, like many slaves, had long resisted her captivity: refusing work, stealing, disappearing for periods of time, generally trying to disrupt the life of her “master” and ensure her enslavement was as much of an inconvenience as possible. Now, she resisted again. As she was unloaded and handed over to her new “owner,” Cooley screamed and put up a fight.

When Simcoe heard the tale, he was appalled — and he saw his chance. During the next session of the legislature, he pushed a bill to abolish slavery.

But with his government full of slave-owners, he was forced into a compromise — the exact thing he had promised never to do. The new law didn’t abolish slavery immediately; instead, it would be gradually phased out. No new slaves could be brought into Upper Canada, but any who were already here would spend the rest of their lives in slavery. Their children would be born into captivity, too; they wouldn’t be free until they turned twenty-five. Finally, anyone who wanted to free a slave was discouraged from doing so: they would be forced to provide financial security to ensure the newly freed slave wouldn’t be a drain on the resources of the state.

The bill was passed just a few weeks before Simcoe founded Toronto. And so, the foundations of our city were laid with the help of slave labour. During the early years of the new town, there were fifteen Black slaves within its borders — and another ten just across the Don Valley.

Some of Toronto’s slave owners are still familiar names today. The Jarvis family is remembered by Jarvis Street; James Baby’s old estate on the Humber River is still called Baby Point. Peter Russell — a gambling-addict ex-con who Simcoe trusted as Receiver- and Auditor-General — enslaved a woman named Peggy Pompadour and her three children: Jupiter, Amy and Milly. Their acts of resistance were brutally punished by Russell: Jupiter was once bound and strung up in the window of a storehouse as a painful public humiliation. But Peter Russell is still remembered in the names of Peter Street and Russell Hill Road.

Simcoe’s relationship with slavery only got weirder and more conflicted after he left Toronto. In 1796, ill-health forced him to sail home to England. Just a few months later — while still officially serving as Lieutenant Governor of Upper Canada — John Graves Simcoe was sent to Haiti. There, the avowed abolitionist was asked to put down the biggest slave uprising since Spartacus.

Haiti was a French colony back then; they called it Saint Domingue. The leaders of the French Revolution had abolished slavery, but French royalists still controlled Haiti — and they had no intention of giving up their half a million slaves.

When the slaves rose up in a revolution led by François Dominique Toussaint L’Ouverture, the French royalists asked the British for help. Thousands of British troops were sent to the island, hoping to crush the uprising, restore slavery, and secure the island’s sugar riches for themselves. By the time Simcoe arrived, they’d been fighting for years without making any real progress. His job was to turn things around. He was appointed as commander of the British forces in Haiti — a man who hated slavery fighting a bloody war to preserve it.

The Haitian Revolution was a long and brutal struggle. It raged for thirteen years and claimed hundreds of thousands of lives. Countless atrocities were committed. Simcoe’s attempt to keep his own men in check — an order to halt all “cruelties and outrages” — was ignored. His army pushed Toussaint’s forces back, but were stalled by a counterattack. His men were dying by the thousands: some in bloody battles, still more of yellow fever.

Simcoe only lasted a few months before he got sick of fighting for a cause he didn’t believe in. He was sick of the war, sick of a lack of support from his superiors, sick of literally being sick. He left Haiti and sailed home to England, where he tried to convince the government to withdraw from the war; he was nearly arrested for desertion. The British kept fighting for a year after Simcoe left Haiti, and the French kept fighting long after that. In the end, the Haitian Revolution was successful — it led to the establishment of a new, independent, slave-free country in 1804.

But while slavery was now over in Haiti, it was still part of life in Toronto. It would take many years before it gradually dwindled out: one by one the city’s slaves died or were freed by their “masters.” There’s no record of when the practice finally ended in Toronto, but there were no slaves left in the city by the time the British abolished slavery across the Empire on August 1, 1834.

By then, Toronto was beginning to gain a very different reputation. Black families like the Abbotts, the Blackburns and the Augustas — some of them former slaves themselves — worked with White allies like George Brown to make Toronto a relatively safe haven for those fleeing slavery in the United States. They organized anti-slavery societies, secured lodging for refugees, and raised funds to help the new arrivals get started in their new home. They struggled every day to make Toronto a more welcoming place for those fleeing racial persecution.

Half a century after Simcoe’s chilling compromise, Toronto had become an important stop at the end of the Underground Railroad.

A version of this post originally appeared on the The Toronto Dreams Project Historical Ephemera Blog. You can find more sources, images, links and related stories there. Elements of this story will appear in The Toronto Book of the Dead.